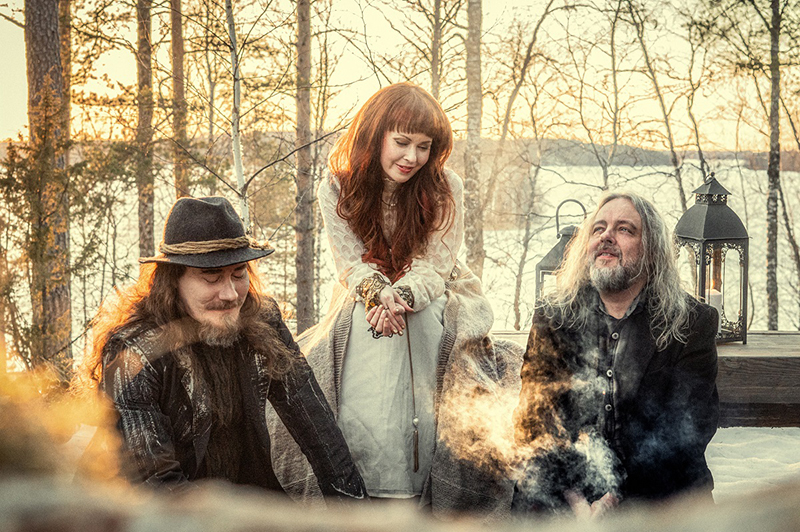 Are you ready to travel (once again) in AURI’s dreamy world of fairytales? Finnish singer Johanna Kurkela, together with her comrades, is ready to delight us with new stories and enchanting melodies. In order to learn more about this new full-lenght “II – Those We Don’t Speak Of” , we got in contact with Johanna herself. Enjoy!

Hi Johanna, welcome back to Femme Metal Webzine, how are you? And how are these precarious days treating you?

Hi Femme Metal Webzine! Great to chat with you! Thanks, I’m good. I’ve found that the best cure for uncertainty and confusion is to keep on doing the things that make you happy.

In our case that has been music. Unfortunately, at the moment, we can’t enjoy it all together live, but luckily we can still make it, and that gives me hope and keeps me positive about the present and the future.

In September, AURI‘s second full-length “II – Those We Don’t Speak Of” will see the light. What can you share about its general production?

Well, we pretty much repeated the process and working methods of our previous album, everybody writing music and recording in their home studios, sending files back and forth.

The biggest difference was that, this time, we already had an established world of AURI, to where we now could just return and explore it it even further. For me, personally, the release of our debut album finally blew open my Pandora’s box of songwriting, from something that had been just tentatively ajar, to now having no lid at all!

New songs started pouring out right after the release of our first album in 2018. Even so much so that I ended up forming another new band Altamullan Road, with yet another dear friend of mine, Johanna Iivanainen, to make use of all the songs. At first, we thought we wouldn’t make AURI II until after Nightwish‘s “Human :II: Nature” tour, but when the pandemic hit and closed every place up, we soon realized, the time for another AURI album was now. Luckily, by the time we started we already had the majority of the song material ready. That made the whole process go really fast and the whole album was in wraps in just a few months.

The album is aptly named “II – Those We Don´t Speak Of”. But, who or what are in this case those we don’t speak of?

Hah! You’re not the first one to ask that and probably not the last. Don’t you just love a good mystery! I do. That was my inspiration behind writing the song. It really is a play around the mind and it’s shadows. What might dwell in those shadows of ours? I guess the answer is for each listener to find out.

Out of “II – Those We Don´t Speak Of”, two singles + videos were released: “The Valley” and “Pearl Diving”. What insights can you share?

Well, we like to think of albums as cohesive entities. That’s partly the reason why we ended up styling our album covers to resemble volumes of books. They are each a journey to experience. If it were up to us, we’d rather just give people the full album to enjoy right away. But I guess, if releasing singles help pique people’s interest in “reading the whole book”, that makes sense.

AURI‘S debut dates back to almost 3 years ago. If you can draw a parallel between the band’s debut and the upcoming “II – Those We Don´t Speak Of”, what are the main differences that you can find? How do you think the band’s sound has evolved?

The biggest difference was probably the fact that this time, we decided to use Finnish hands to help us, instead of British. The album was mixed and mastered in Finland, also the photos were taken here. Maybe for the next album we’ll switch things back around again, lets see! Nevertheless, these both places are an integral part of us and AURI.

“II – Those We Don´t Speak Of” features also Nightwish‘s drummer Kai Hahto. How did this collaboration happen? And also, how do you think has he upgraded AURI‘s sound?

Kai is a dear friend, and when we made the decision to infuse more Finnish vibes on this album, Kai was the first person to call. He’s expertise with drums is just something else! We had an epic time recording him in Petrax Studios, Hollola, and have already asked him to play the drums on our future live adventures as well.

Now the one million dollar question: will we ever see AURI on a proper tour?

If it’s up to us – Yes, most definitely! Let’s hope we’ve finally rode the last wave of COVID- 19 soon and can all get back to sharing live music and touring. Evidently, there are many Nightwish shows that have been cancelled that have to be ticked off the list first, but at some point, definitely, there is a plan to hit the stage with AURI.

Beside being a member of AURI, you have a well-established solo career in Finland. In that regard, despite the pandemic, what is it in the pipeline? Which is the thing that you are more looking forward to? And, which are your next plans?

At the moment I’ve got three big loves in my life when it comes to music. Three dream come true bands that I’m currently dedicating all my time to: AURI, Altamullan Road and Eye of Melian. The last one is still a work in progress, but keep your eyes peeled!

Can’t wait to tell you more about it soon!  And also, me and my namesake Johanna, are planning to pick things up with Altamullan Road and start writing new music for another album next year. So, a lot of wonderful adventures coming up in the near future as well!

So, Johanna, we’re almost at the end. Please be free to say hi to your fans and listeners. Thank you so much for this interview.

Thank you guys! We are so excited to pick up the journey of AURI from where we left of. Making this album has given us a lot of joy during these times of change. We hope it can offer a place of solace for you as well. May you find your pearl!