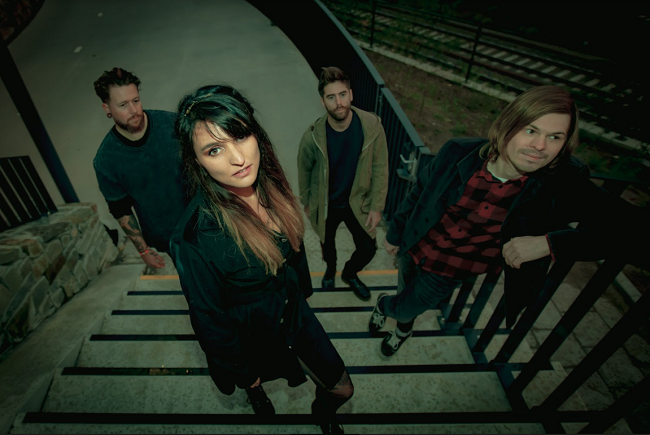 Belgian shoegaze quartet Slow Crush has recently announced the upcoming full-length to be released the upcoming fall. But before this, we have enquired singer Isa Holliday about the band’s recent re-release of its debut album, “Aurora”. Enjoy!

Hi Isa, welcome to Femme Metal Webzine. How are you and how is life treating you in these precarious days?

Hi Miriam, thanks for having me! I’m doing alright, thanks. I hope the same for you, too. Keeping busy, making the most of our time to stay productive in the absence of live shows.

For our readers who are not familiar with Slow Crush, would you mind introducing us how did the band come together?

After playing together in various heavier hardcore and metal bands over the years, we wanted to try something different. Jelle had wanted to play this style for a long time and felt the time was right to try it out when our previous doom metal band split in 2016.

Around mid-March, your début album “Aurora” was re-released via Quiet Panic, in LP format and in limited edition. Originally it was released in 2018 via Holy Roar Records, would you mind recalling about its recording process? And so far, how was it received by press and fans?

For “Aurora” we went over to Southampton, UK to record at the Ranch Production House with Daly George and Neil Kennedy. Other than the fact that the studio and engineers are amazing, we wanted to be fully focussed and completely removed from home distractions so travelling to another country to record made absolute sense. The album was premiered on Stereogum, praising it as “fucking phenomenal”, featured in Kerrang! magazine, played on BBC Radio 1, all things that we had never imagined, that completely blew our minds.

We often hear from our fans, after shows and in messages, that our music transcends them to another plane of existence, which is exactly what we were aiming for. One fan even named his daughter Aurora after our album. We were extremely flattered to hear that and more than happy to sign the album cover with a dedication to little Aurora.

The following question might sound overrated, but why did you choose to reprint “Aurora” and personally speaking, which meaning does this album hold for you?

After the demise and exodus of Holy Roar Records, we wanted to give the album a fresh start. With this reprint, we’ve spruced up the artwork a little, adding debossed spot gloss to the cover as well as the Quiet Panic and Church Road Records logos. We were running out of the 3rd press copies we had left and needed to a repress anyway, so this couldn’t have come at a better time, haha.

For this occasion, the lead-in single “Aid and Abet” was released and we can find on YouTube its dedicated video. What would you like to disclose about the video and the lyrics?

We reached out to to our good friend Bobby Pook to make the “Aid and Abet” video. Considering all the corona restrictions, we knew we could trust him to make something special. . He did not disappoint us!

With the magic of Zoom, we had a nice long video call brainstorming session. In which he pitched the idea of recreating a bed lift scene from Breaking Bad. Something he had long wanted to do but never had the opportunity to. With the song’s lyrics being about struggling with breaking habits and addictive behaviour, we all felt that it perfectly.

Recently, Slow Crush has announced a label deal with US’s Quiet Panic (of which it will follow the repress of “Aurora”) and UK’s Church Road Records. How and when was your first approach with it? And how is going so far?

In August last year, allegations made against Holy Roar‘s founder lead to the labels collapse. So, with all bands and label staff announcing their departure and cutting ties with the label. From that point, we were approached by various labels, large and small.

One of the benefits of the pandemic restrictions was that there was no need to make a rushed decision. Being stuck at home, unable to tour, we had sufficient time to consider all the options. And, (virtually) meet with the labels that caught our interest.

We followed our hearts, choosing to work with people who share our passion and vision for the music. People who are compassionate, engaged and motivated – and overall, genuinely nice people! Having been the main driving force and label manager at Holy Roar, we were used to working with Justine. Now she co-runs Church Road Records together with her husband, Sammy.

We know she’s a work horse. And cannot commend her enough for making sure every single band’s needs were met in the swift Holy Roar severance. Ryan and Mike won us over from the moment we had our first video call. There was an immediate click, feeling their enthusiasm over the call. Having a collaborative effort with each label armed with their regional expertise we are confident that we made the right decision. We’re very excited to be working with this team of like-minded, caring individuals. Indeed, we are not only our business partners, but also our friends.

As you have mentioned on Facebook, “Aid and Abet” is the 5th single out of “Aurora” that was anticipated by “Glow”, “Tremble”, “Shallow Breath” and the self-titled song. If you don’t mind, would you like to offer a comment about each song’s lyrics?

Empathy and self care are common themes running through the album. “Shallow Breath” and “Aurora” are love songs, or a love song and an “out of love” song. “Shallow Breath” is about a summer romance while the title track was inspired by a good friend of mine working through a break up. “Glow” is about releasing yourself from societal constraints to follow your dreams.

“Tremble” is our protest song, characterising a voice for the voiceless. For instance, the injustices politicians or media would rather briefly touch and sweep under the rug. Such as animal rights, the marginalisation of the refugee crisis and insufficient aid offered, domestic violence. Unfortunately, there are too many to name but we hope to get you thinking.

Back in 2020, you have released a 7″, containing the songs “Reel” and “Pale Skin”. Will these songs be included in the foreseeable future in your upcoming second album? Also, why did you decide to publish it as a stand-alone release?

While still being very Slow Crush, there’s a clear evolution in sound between “Aurora” and the “Reel” 7″. Having little time planned off between tours, we knew it would be a while before we would be able to record and release album number 2. The planning to share the tracks with the world in April was all made pre-pandemic.

We wanted to honour the songs with their own 7″ release. And, also taking this opportunity to donate part of the proceeds to local charities for the homeless and those living in precarious conditions. We love both tracks but feel they don’t entirely fit the flow of the new album. It makes sense that with this release, they get the individual attention that they deserve.

What does the future hold for Slow Crush?

We can’t wait to get on the road again, as soon as it’s safe to do so. Realistically, nobody knows when that will be but it can’t come soon enough! Until then, we’ll continue to keep you all up to date of what we get up to through our social media and newsletter.

Recently. we have recorded a live session in the Ancienne Belgique which will be broadcast on tv. We’ll be sure to share that through out YouTube channel when available. As for the next full length, it’s all recorded and currently in post production. We can’t wait for you all to hear it! If all goes to plan, we hope to share it with you later this year.

So, Isa, we’re almost at the end and with this, please feel free to say hi to your fans and our readers. Thank you so much for this interview.

Thanks again, Miriam and Femme Metal, for having me. And thank you to everyone reading this. Take care of yourselves! Much love, Isa x