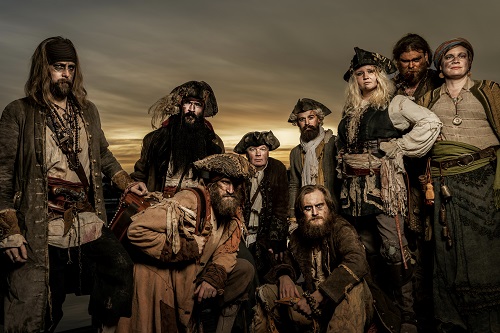 More than a band, Sweden’s Ye Banished Privateers has to be considered an active amalgam of more than 30 musical souls that make up for this collective. They offer us some songs from the past time and their intent in their music is let us recall and relive ancient memories and past historical events. Are you ready to sail the ship once again? Enjoy this ride with us!

Hello there girls, welcome to Femme Metal Webzine. How are you and how life is treating in precarious times?

Hello, and thank you for having us! We are fine, under the circumstances. Of course we miss playing in front of a live audience, but we have plenty of other on-going projects with the band until that’s possible again. We try to find alternative ways to connect with our audience, just this weekend we livestreamed our rehearsal and partied with people from all over the world! And part from that, there’s always a piece of 18th century clothing to sew buttons in, or a new song idea to work on.

First of all, would you mind introducing how Ye Banished Privateers got together?

The band was founded in 2008 by Pete and Björn, they actually met at a pirate themed costume party and really liked each others costumes. They discovered they both had always wanted to play in a band – so they started one. Before the first rehearsal a few more members were recruited. The idea was actually to start off playing covers, but since Pete didn’t play an instrument (or sing) at the time and was worried to seem useless in the band, he instead presented an originally written song. That’s how the band came to be, and also the reason why we are not a cover band.

Back in February, you have released your fourth album “Hostis Humani Generis”. What can you share about its general production?

Every song in this album was written with the theme of “Hostis Humani Generis” in mind. More than any of our previous productions, the album tells a single coherent story. We have also stepped up our game even more when it comes to the arrangement of soundscapes and voice acting, adding to the immersion and the story telling.

For what I’m aware, Ye Banished Privateers is made up of 30 members. From the point of view of logistics, how difficult might it be to handle a live show?

Yeah, it’s true that we are a huge amount of bandmembers. The current number is around 25, I believe. Our band is more of a collective than a traditional band, since we don’t have all musicians on stage at all shows and we are basically never the exact same constellation of people. Usually when we perform there’s 9-11 privateers on stage. The rest of our members is at home working their day jobs and taking care of their families while some are on tour. However, the ten pirates are more than enough to make the logistics pretty difficult, especially when also carrying instruments, props and sometimes merchandise in public traffic (or cramming all of it into a minibus)!

While Alestorm‘s lyrics focus more on the more party side of the pirates’ life, instead Ye Banished Privateers tend to delve into much more real and darker aspect one. Which are some of the themes treated on the new album?

“Hostis Humani Generis” takes place when the end of what is now known as “the golden age of piracy” is closing in. The days when the poor could set sail to feast on the riches from some of Europe‘s mightiest nations are over and reckoning is near. Free men and women now turn on each other to escape the gallows as their dreams of liberty has made them enemies of mankind. From the first song to the last, we tell the story of the last days of the free pirate republic Nassau, up until the bitter end in the Execution Docks gallows. It’s definitely our darkest album yet, but there’s some party tunes in there too!

“No Pray, No Pay” was the latest single released. It features Naglfar‘s Kris Olivius. How was collaborating with him and how was shooting this video?

The video was shot for “No Prey, No Pay”, and we took Kris‘s face and edited it in for the metal version of the song. We released the song on April 1st, as a treat (and because we had a really stupid idea and we’re not always great at killing our darlings). Working with Kris was super easy, he’s so laid back and a skilled singer. We had a lot of fun and pretty sure he did too.

Also, what stands for exactly “No Metal, No Pay”?

It’s a joke about Napalm Records refusing to pay our album advance because we are not a metal band… but they’re actually perfectly happy with us playing folk music. Some trolls in the YouTube comment section however, are not.

In normal times, this question doesn’t procure any embarrassment but I feel anyway obliged to ask you if you had any plans to promote live “Hostis Humani Generis” and instead, how your plans changed?

Yes, we had to cancel both of our planned release concerts. The first one was planned to Wacken Winter Nights in February and was actually cancelled due to a hard storm. The second one was an official release show that we were hosting in our hometown Umeå, Sweden, on March 28th. We cancelled it about two weeks in advance because of COVID -19. But we gathered strengths quickly and arranged a huge online party instead, with a live streamed interview and full stage show. We built a foreshore with shipwrecks and told the story of how Ye Banished Privateers was stranded in Marseille and ended up quarantined because of the plague. The livestream was watched by thousands of people and it was really cool to be able to reach our fans in that way. We also had a summer season with a lot of shows booked, all of which have been cancelled naturally. But like we already mentioned, we are finding other ways to connect until we can meet a live audience again.

So, girls, we’re almost at the end and with this please be free to say hi to your fans and your readers. Thank you so much for this interview.

Hello everyone! We enjoyed the interview a lot and hope you did as well. Keep safe, we can’t wait to get back into touring when on the other side of the pandemic. See you then!