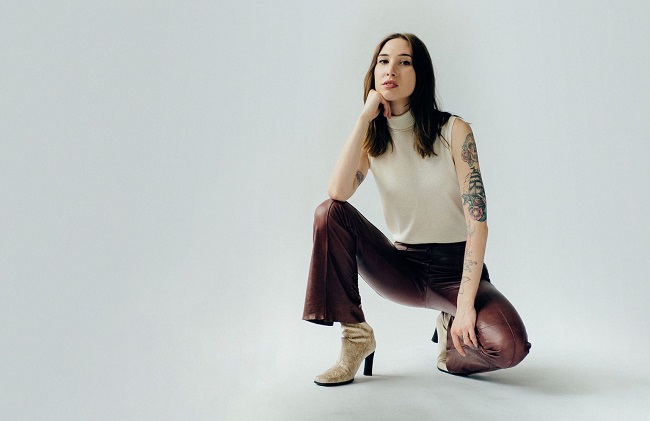 JULIA BARDO – An Interview with the Artist

Even in such strange and unpredictable periods, music can be a sort of anchor of sanity and clarity. In her new LP “Bauhaus, l’appartamento”, the English/Italian artist Julia Bardo keeps up a sort of a diary with music.

It’s an open book about feelings and emotions. So, as the title suggests, it’s quite personal. Discover with us more about it. Enjoy!

Hi Julia, welcome to Femme Metal Webzine. How are you? And, how this precarious period is treating you?

I don’t know. I keep on my changing the way I feel everyday. So, some days I feel amazing like things are improving. But some days, I’m dubious if I’ll be able to travel back in Italy and visit my family.

Actually, this is affecting me the most because it’s almost 1 year that I’m not seeing them. And all this situation it’s starting to take a toll due to the homesickness.

Thankfully, my friend is away for 4 days and she brought me her cat here. She’s giving so much love and I’m so grateful for that. What animals can give you back is inestimable.

So, Julia, your relocation from Brescia (Italy) to Manchester (UK) 4 years ago officially marked your musical adventure. But, before relocating, how music entered your life?

Basically, I told my history for a masterclass the other day. Actually, everything started when I was 13 years old when my dad decided to open a bar. At the time, my family and I were living in a rural village but quite near to the closest city. So, when my father found this place in the city, we moved all together.

Of course, most of the time I was staying alone. However, during the summer and school breaks, I helped out there all the time because all my friends were still at the village. During my work, I was allowed to use the stuff bathroom. And what I simply done was singing because it was the only thing I could do.

Music kept me company. Indeed, my mom introduced me to Italian music, my aunt used to sing and my uncle plays music. Then, around the age of 16 or 17, we had this friend/customer at the bar who owns a little studio at his place and he invited me for recording some covers.

I just went there and recorded three songs and after, I’ve uploaded them on SoundCloud. What happened next is that I was contacted by this artist and I was asked to form a band or a duo. So, we met and after a while, a band was formed. Unfortunately, the band didn’t last so long due to internal conflicts. In the end, it’s how music entered my life.

Your second LP called “Bauhaus, l’appartamento” has been released on September 10th via Wichita Recordings. What can you tell me about its production? And, what inspires you the most during the writing phase?

I started gathering ideas this album 2 years ago and I wrote it in 2 months. It was completely recorded, demoed and produced all my self at home. It’s entirely homemade. I’ve realized that I wrote so fast because I had so much inside of me that I need to put out. Actually, I demoed the LP in my flat which is called Bauhaus.

So, I definitely decided to include Bauhaus next to the Italian word L’appartamento for show where musically I was born but also for reveal where my origins come from. For me, it’s really important that. However, only after 1 year after, I managed to recording it properly in the studio together with my band. Of course, during the real production some things were changed.

Instead, for what concerns my musical inspiration, I can surely mention St. Vincent, P.J. Harvey, The Breeders, Anna Calvi and Cate Le Bon. I look up o them a lot and they are amazing. They have all their own style, they’re so cool but at the same time, they’re all so different. They are so unique and I can surely recognize them a mile ahead for their unicity.

And this introduces another aspect of the LP, the lyrics. What insights can you share about their themstics?

Most of all, I’m a very nostalgic person and I always think about the worst case scenario of every situation I deal with. Also, I overthink stuff a lot. Consequently, I become quite scared of everything and I don’t remember being like this when I was younger.

Especially with the pandemic, this feeling is worsened and then, I become anxious about separations. Then, my lyrics are about love, how I feel in general, about emotional dependency. Lastly, it’s about insecurities.

Do your think that “Bauhaus, l’appartamento” is much more personal than your previous one, the EP “Phase”?

Well, definitely. In fact, as the title suggests it was just a phase which related to those 4 songs contained in that specific release. It was mostly an attempt to see how my material would be received. Regardless, “Bauhaus, l’appartamento” is completely another level. This is my baby, I’m proud of it because I put a lot of effort in it. And, therefore, it means a lot to put it out in the world. It’s Indeed an emotional release which makes it much more personal. It’s a sort of diary with music.

“Bauhaus, l’appartamento” is produced together with Evan Hinshelwood. How this collaboration born? And, what did you learn from that experience? What was the useful lesson that you have gained for your future?

Everything happened because me and my manager Damien were looking for a producer suitable for the sound that I had in my mind. Someone suggested Evan to Damien and during our meeting, we realized that we both love PJ Harvey, so, we were both on the same wavelength.

After, I felt really good to the point that I got a feeling that we would work together quite good. In fact, we did. Mostly, his apport was just adding his touch because in the end, he didn’t change much. Actually, the album needed that. In regards of what I’ve learned, Indeed, it was a lot. For example, I became much more confident while laying down the lead guitars and live the moment.

Despite the pandemic, it looks like slowly the world is waking up again. So, are you planning to bring this amazing album on tour along Europe?

I cannot wait. As soon as I’ll get the opportunity, I’ll take it. I’d love to bring it over also in Italy because if it’ll be accepted even in my home country, I’ll be beyond happy. Hopefully, it’ll happen. Though, before the pandemic, I used to think a lot about the future but, now, I’m much more fatalistic and enjoy the moment. Well, at least, try to do that.

So, Julia, this is my last question. Thank you for your time and for being with me. Usually this is the space’s artist where they are free to share their last words and/or salutations.

I’d like to share with your readers that independent artists have suffered the most during the pandemic because we’re not able to play live music or sell records. So, just buy and support new artists and just try to buy local for support record shops. Lastly, I cannot wait to go out there to play gigs.