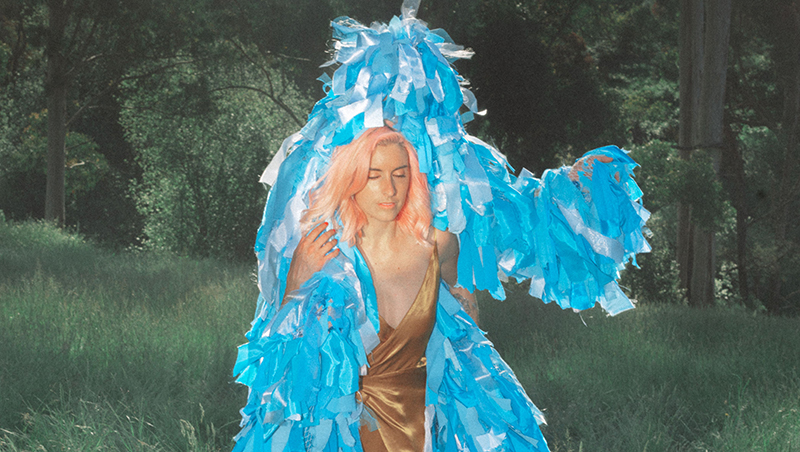 MERPIRE – An Interview with the Artist.

Behind the nom de plume Merpire, it’s concealed the Melbourne-based artist Rhiannon Atkinson-Howatt. The singer-songwriter has recently released her debut album “Simulation Ride” via ADA/Warner. With “Simulation Ride”, the artist has published an album fraught of honesty, some good ol’ indie/dream pop with some rock nuances and openness. Enjoy!

Hi Merpire, welcome to Femme Metal Webzine. How are you? And, how this precarious period is treating you?

Hey! I’m great thank you. We’re in lockdown again in Melbourne. It’s been hard to stay motivated, but I’ve taken up skateboarding to clear my head!

For those people who are not familiar with your musical career, would like to recall our readers, how did everything start? And, when did you release that music would be prominently part of your life?

I started singing as soon as I could talk apparently. I started performing in a couple of cover bands when I left school. A pub rock band playing Bon Jovi, Pink!, Whitney Houston [laughs].

Then, in a jazz band playing Billie Holiday, Ella Fitzgerald, Frank Sinatra‘s cover. I was in those bands for about 11 years, writing my own music at the same time. Actually, I found it hard to release that first song and I kept waiting for the right time. But it turns out that you have to just must jump in!

Back in May, it was announced the upcoming release of your debut album “Simulation Ride” via ADA Warner. What would you like to share about its general production?

Yes! I’m so excited! James Seymour and I produced it together. It’s got some iPhone voice recording moments, big guitars, sparkly synths, kid’s toys. James is great at putting in tasty little moments that only happen once in a song. There’s a lot to go back to. I like to use the production to help carry the emotion across whether it’s by making small, delicate moments or big walls of sound with effects on the instruments.

Secondly, lyrically speaking, which themes have you dealt with in the 11 songs present on “Simulation Ride”?

Lyrically, I talk a lot about my relationship with anxiety. I try my best to explain how it feels in my head in real life situations. There’s some love and heartbreak in there to balance it out. I talk about learning more about myself and who I am in a relationship, my confidence.

Lastly, from this full-length, two singles “Village” and “Dinosaur” are already available on streaming. How was to shoot their videos? And what insight can you share about them?

These videos were so fun to shoot! I live with my videographer, Nick Mckk. We shot both these videos at our house. Indeed, “Dinosaur” was filmed underneath a trampoline we had in the front yard. I had this idea of rebuilding my childhood bedroom, or what I would have wanted it to be. Then made it spooky by asking a couple of housemates to be the hands in the walls trying to get to me. They were representing my anxieties.

For what concerns the second video, in “Village” are featured my band members playing in each bedroom in our house. We’re lucky with the way the house is set up because all the windows were accessible to shoot from the outside. Each band member had a different colored light in their room. It was so nice to get them over to my house after not seeing them for so long. My other housemate Joe cooked for us all pesto pasta for dinner. It was probably the easiest video I’ve ever done. We just had to stand in a room and play.

As a title album, “Simulation Ride” is quite straight-forward. Which is the ride that you are attempting to simulate? Or more simply, what it does refers to?

Like many people do, I often zoom out of my life and think about how amazing it is that we all even exist. Music is such a magical experience to make and listen to and everyone’s experience is different. I love that one person listening to my album will have a different experience to the next person.

So, the simulation ride is a personal one. It’s also a line from the opening track, “Village”, when I say “I feel like I’m on a simulation ride when we arrive at the party”. It’s about when I’ve been at home all day and I’m feeling too anxious to go out even though it’s just my friends that I’ll be going to see. I get to the party, and I feel like I’m not there. Or my body is but my mind is still at home.

Per se, you are quite a fascinating and bold singer-songwriter. Where does your boldness originate from? And, what’s your end goal that you wish to achieve with your songs?

Thank you!! That’s nice of you to say. I think because my music is coming from my brain, my song writing doesn’t feel bold. I’m sure though if I was 16 again and heard my album I’d be really impressed. My mind is pretty whack. I’m always thinking of strange stories and thinking of weird stuff. It’s pretty exhausting ha-ha everything can be a story!

From listening to so much music over the years, writing in a journal, reading, writing poems, I’ve picked up what fascinates me and try to write in a way that would interest me. I like to talk about things people can relate to while making it my own personal experience too. I also like to use words I might not have used in a song before – like deodorant and psyllid!

“Simulation Ride” was co-produced by you and co-produced and mixed alongside James Seymour. What did you learn from this experience as a producer?

So much! You’re always learning when it comes to music. That’s why it’s so addictive. Working with James has been amazing for my confidence. It took me a little while to speak up. I was always worried my ideas were silly but early on James always encouraged me to have ideas.

Once we started including a few of them, I began to write with production ideas in mind for songs. James has taught me when to take sounds out as well as put sounds in. To think about texture. Being very emotionally driven, I gravitate towards sounds and effects that support what is being said lyrically.

I would looooove to get over to Europe and the UK as soon as I can and play for new audiences. I miss Europe, more so now that I can’t get over there. I’ve always dreamed of playing festivals like Glastonbury and Roskilde. One day!

I’d also love to work with producers and songwriters from other countries with a different cultural background. While I only have the music, I make as the one thing that’s within my control, I’m just going to keep writing and dreaming.

So, Merpire, we’re almost at the end. Please be free to say hi to your fans and your readers. Thank you so much for this interview.

Hi! Whoever is reading this and listening to my music, I cannot thank you enough. If your anxiety too, I hope my songs help you to feel less alone. Now go tell 1000 of your closest friends to listen to my music so I can tour over there! Thank you for having me 🙂