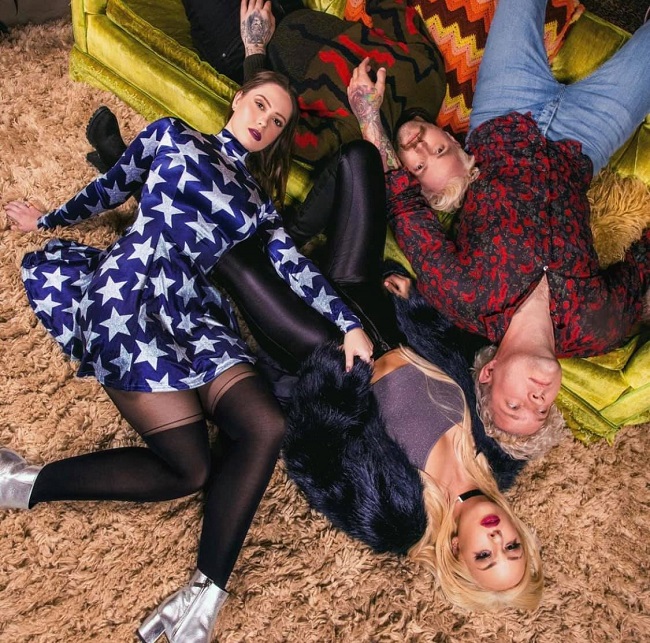 Back in 2020, LA based alternative pop Paper Jacket have released their second full-length “Souvenirs – Volume 2″ via Selma Records. However, during this pandemic, the quartet keep themselves busy by releasing new singles and new visualizers on YouTube.

Recently, the band has also released a new single called “Rumors”. But, let’s discover more together with the singer Aimee what’s in the pipeline for this promising band. Enjoy!

Hi Aimee, welcome to Femme Metal Webzine. How are you and how life is treating you in these precarious days?

Thank you for having me! I’m happy to chat. I’ve definitely adjusted to the new normal. And, I’m keeping myself by writing, rehearsing for future shows or just taking mental health days when needed.

For our readers that are not familiar with Paper Jackets, would you mind introducing  how the band came together?

Well it all happened in pieces through time. Actually, vocalist Mason James and keyboard player Emily Dickinson played together as teens and pioneered the idea of starting this band after reconnecting. Then, they found the guitarist Jonny Vesely through Craigslist who was a Wisconsin transplant looking for people in LA to play with.

It’s always a funny fact to know. Indeed, James and I met around 2016 through a mutual producer friend. And, before I started playing with Paper Jackets, we have recorded a folk record together. Well, initially I was doing mostly backgrounds, but it evolved over time into a dual male and female lead. So, the band had been in the making and experimenting for a couple years before our first release in 2018.

Recently the band has released four singles from the upcoming second album “Souvenirs Volume Two” which is slated to be released later this year. What should the fans expect from this release and, which is the story behind its production?

We feel like everything we are in this moment is embodied in “Volume 2”. There’s a lot of unexpected influences on some of the songs. Actually, some of them take some cues from The Beach Boys and The Mamas and The Papas. And we also still have a spectrum of quirky to dark pop that happens. And, some songs are years old and some are months old. It’s a journey and we’re very proud we took and hope our efforts come across to the listener.

As I mentioned before, the singles that were released out of this upcoming release are “White Noise”, “Drugs & Honey”, “i’m depressed” and “Bad Company”. Lyrically speaking, what can you disclose about these songs?

Indeed, “White Noise” was a softer side we haven’t really shown up until now. Though the song is romantic in nature, not all lyrics were inspired by a relationship. But, by the state of the world. This pandemic has given us way too much time to watch the news. And, it’s starting to be so rare seeing people communicating and listening to one another, even online. When I just scroll through comments on any topic, it just seems everyone is stuck in their preferred echo chamber. And this song kind of shines a light on that sentiment.

While “Drugs & Honey” is a sweet song. But, definitely hints at struggles we have as a band whether it’s dealing with addictions or unhealed trauma.

Instead, “I’m depressed” was purely a byproduct of the 2020 experience. And, probably my favorite release so far just because it’s so personal.  Honestly, you feel a sense of responsibility to only write from an empowerment or heroine perspective as a woman. In this period, I think it is important to uplift people while they listen to our music. But, also to show vulnerability and admit when you need help. It’s important that and I think can also be empowering.

For closing, we have “Bad Company” which is a song of acceptance. It’s laid out in a relationship context, but it recognizes that no one is perfect and we’re not here to judge.

Also, “Souvenirs Volume Two” will follow the previous release “Souvenirs Volume One”. Musically speaking, which differences can we find between these releases and instead, lyric wise which is their connection?

Well, the most obvious difference is the back and forth male female lead. Also, this record is more of a conversation than a story.  What is on display here, writing about our lives so all of the ups, downs, and messiness.

In the press release put forward the issue that the general production on both collections of “Souvenirs” has been long. Why?

Seriously, I’m not kidding when I say there are over a hundred songs. We have composed them throughout the past couple of years. Indeed, James is a bit of a serial songwriter because he’s able to find inspiration everyday. While for me, I have to wait for inspiration to find me and then, write.

To which extent, are these two collections autobiographical and if so, how difficult is it to put your own fragilities on such a wide display?

I think “Volume 1” with the exception of “Miss You” is very much from James‘s experiences. While“Volume 2” has in addiction a few chapters ripped from my diary.

I think putting your fragilities on display is the only option if you’re going to be an artist. I’m glad that I did it I have because those are things I’ve been afraid to say which I’ve experienced. Then, there are higher chance that someone else who is going through the same he/she can relates. As a matter of fact, music is about connecting with people and their hearts.

What does the future hold for Paper Jackets in the medium and long run?

We’ve always been grandiose with our ideas, everything we do we try to make it big. It’s just in our nature. We’re a very ambitious in that sense. But, I think our plan right now is taking one day at a time, getting our show ready. And, so as soon as it’s possible, we would like to bring on the road these songs. On which we’ve worked so hard for the past couple of years.

Nevertheless, in the long run, there will be another album and that will be something interesting to see. In the sense of how we evolve next, but for now we can only live our lives and see where it takes us. Lastly, we have new merch coming to Hot Topic.