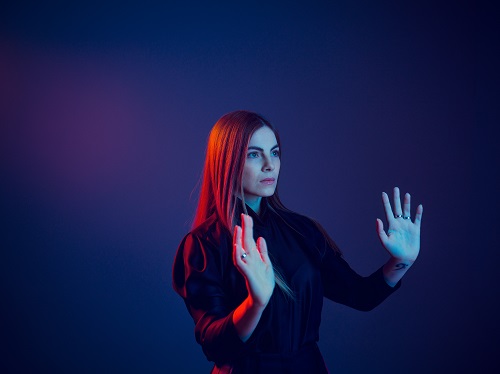 Fresh of her new deal with the German label Long Branch Records/SPV, the Polish singer-songwriter Julia Marcell has recently published her fifth album “Skull Echo”. This full-length has to be considered has a part of more extensive multi-cross media project. If you like a well-balanced mix of alternative, indie, electronic and art pop, I can definitely recommend to check her out but in the time, read with us this interesting interview. Enjoy!

Hello Julia, welcome to Femme Metal Webzine. How are you and how life is treating you in these precarious times?

Hello Miriam, thanks for having me. I’m good, I’m staying with my family, so that’s nice. It’s a quiet time.

For the readers that are still not familiar with you. When did your career start and when did you realize that arts would have played such an important role in your life?

I always knew that. I remember when I first went to the theatre as a small child and it made such an impression on me, ever since I wanted to be somehow involved in telling stories. Just the idea of transporting somebody to another world, I was affected by it, I couldn’t sleep at night.

So I started making my own things at a young age, tried my hands at many things. I was always serious about it, but it turned into a career only around 2008, when I funded my debut album via crowdfunding. It was the right moment, suddenly things came together and I started touring.

On May 8th, you have released your fifth full-length “Skull Echo”. First of all, it marks the beginning with your collaboration with Long Branch Records. How this partnership started and how is helping as an artist?

I got introduced to Long Branch by Michał Wardzała from Mystic Productions, who are my label in Poland. Long Branch Records liked my record, we met and it clicked. It’s been great working with them so far, they opened a new scene for me, my music reached new places.

“Skull Echo” was introduced by the first single “Infinity Halt”: I love the song and its title intrigues me a lot. To what are you specifically referring to?

“Infinity Halt” was inspired by the concept that time is really very flexible and everyone experiences it differently. The protagonists are having so much fun with each other, that time flies by like crazy, while all they want is for the moment to last forever.

“The Odds” is the second single taken from “Skull Echo”: of which odds that  you speak about in the song?

The odds of us being born at all. In this moment in time, in this place in the world, being who we are. I like to think about that sometimes, it’s an interesting perspective, it helps me spot which of the things I sometimes worry too much about are really unworthy of the attention.

While “Nostalgic” is the third single taken from “Soul Echo”. What exactly do you feel nostalgic about?

This song is about longing for a certain idea of the past, that romanticized, hyper colorful, safe past we see everywhere in movies, books and songs. Our memories are creative and apparently we constantly fill the gaps in what we remember with our imagination. I find that interesting.

Besides being a musician and singer-songwriter, you have to be considered an all-round artist. So, I was wondering to ask you, how much and in which manner, the visual arts get influenced by the musical arts? From an artist point of view, where can we find the intersection point between these two distant arts?

I think it has to do with energy. One can intellectualize the arts, but a lot comes from the gut, and that’s to me especially true about music and visual arts. There’s the element of the unknown, but a recognizable unknown, a shared unknown. Some things cannot be put to words, some feelings cannot be explained. You look at a painting and don’t know why it makes you feel something, because it’s a combination of who you are, where you come from, as well as that particular moment you’re in. Same with music.

Sometimes I look at a painting and have ideas for a song, but it’s rarely to do with the painting’s subject. Maybe it’s about the colors, that feel powerful to me, maybe it’s a certain mood. It’s hard to talk about these things, because where do ideas come from? I need a constant diet of art/music/movies/books in my life. I’m amazed at the wonders the artists are capable of, it’s like they pass on a spark, a craving to express something, to share.

Getting more into details, “Skull Echo” is also a screenplay for feature film. What thematics directly treats?

The film tells a story built around the same themes that are at the core of the album. It’s about singular perspective, loneliness and communication. The idea that we are locked in out heads, experiencing the world through our senses and our minds only.

I still remember the golden times of Sellaband, maybe it was one of  the first crowdfunding sites ever existed and this was back in 2008. How your career has evolved since then and throughout it, which life lesson have you learned?

After Sellaband I moved to Berlin and released two albums there, then I went to Warsaw and now I’m ping-ponging between the two cities. I feel like Sellaband gave me a lot, I’ve met wonderful people and had a lot of fun too. I toured a lot too. Which life lesson have I learnt? That you can only plan so much and life will do what it wants anyway. The biggest things in my life came as a total surprise.

In normal times, this question doesn’t procure any embarrassment but I feel anyway obliged to ask you if you had any plans to promote live “Skull Echo” and instead, how your plans changed?

Me and my band started touring the album, we were 4 shows into the tour when it was stopped by the lockdown. Of course, it was heartbreaking, we put a lot of work in the shows and the audiences were amazing. Let’s see what the future brings, but I’m hopeful.

So, Julia, we’re almost at the end and with this please be free to say hi to your fans and your readers. Thank you so much for this interview.

Thank you too Miriam. Stay safe, everyone, lots of love in this strange time.