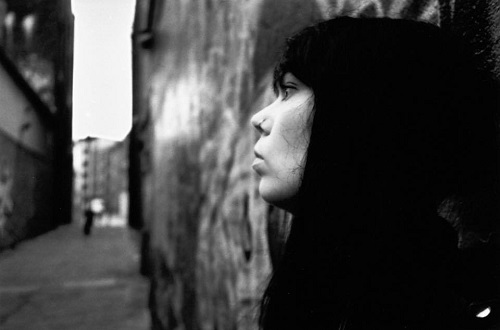 British London based singer-songwriter A.A. Williams is one of those artists that prefer to let the music speak than to speak herself for it. Personally speaking, her music – which has apologetically dubbed as death gospel- has conquered my heart as soon as I saw her live playing in support of Norway’s post-black metallers Cult of Luna here in Amsterdam at the Melkweg. She has totally swept and turned upside down my world like in an emotional tornado. Her debut self-titled EP was originally released in January 2019 but due to great success, it was re-printed with additional bonus tracks in September of the same year by Holy Roar Records. Instead, it’s the recent news that the artist has signed a contract with Bella Union Records whose full-length will follow in Summer 2020. But let’s not get too much ahead, let’s learn more about A.A. Williams, her music, her beginnings and her recent collaboration with the Japanese experimental post-rockers MONO.

Hi Alex, welcome to Femme Metal Webzine and thank you for dedicating me some time even though your schedule is crazy. How are you and how this European tour is treating you?

Hi there, there’s no problem at all. I’m well and this is only the third night of the tour and so far everyone is well, everyone is cool and everybody has slept enough. The shows have been great and for me, it has a good treat because I don’t only get to play but also I get to enjoy them every night.

So, for who’s not familiar with you, when your ‘relationship’ with music started? Are any important events attached to it?

Oh my god, I was very very small even though I’m a quite tall person [laughs] and I was always the taller one in my class and my school. I grew much quicker than everyone else and I tried to do ballet and said to me that I wasn’t good enough to be with girls that have the same size as you, you’re too tall to go with the little ones that have the same age like you. So, they basically told me to go away and come back when you are older. Consequently, my mum has tried to find a suitable creative outlet and she bought for me a kind of an electric keyboard on which I tried to have some piano lessons when I was 6 or 7. Actually, it was that really and I just carried on forever.

I know that your debut album was released back in January 2019 and it was released via Holy Roar Records and what you can share about its general production? I mean originally they featured only 4 songs on it…

Yes, they were and I approached Holy Roar with some demos then they came back to me saying “Hey, we want to release this” and that was me saying “Hey, hang on, I can do better than this. These are only demos”. You know, one song of these was the demo version of “Cold” and naturally, there were some more and I can totally do better than that. So, I had some time booked in the studio and all this, it happened three weeks after I spoke with Holy Road and it didn’t look to me to have enough time but you know what, I just pushed myself. After that, I decided to set up my studio in my living room and at the time, there was this heatwave and all the windows were open, consider that all the sounds of North London like people with their dogs or their children were embedded in the recordings and I had to seriously keep on editing this [laughs]. I mean, I recorded it in a quite short time and it got mixed and it was simply that. Essentially, it was a really homemade operation.

In September 2019, it released its debut EP, which also included 4 bonus tracks that feature some stripped-down rehearsal recordings and Dolly Parton‘s “Jolene” cover. During which occasion you recorded the stripped-down versions?

These ones were recorded during an acoustic performance and it was our second show. We were booked for playing support for Amenra and we never rehearsed those songs in that way before. We basically recorded them in order to remember them and consequently, know its arrangements and practice at home. That’s also why you can listen to a bit of talking and a bit of real life. As I said before, there was just a way to remember and since we are located in a studio, it makes sense to just do it naturally. Thankfully, we recorded them not realizing that we’re gonna use them in the long run but it’s nice to show that these songs were in a non-produced way as well with some piano and voice. In the end, you can still recognize them and it’s nice that should be.

But also you chose Dolly Parton‘s “Jolene”, why? It’s quite a particular choice…

It’s a weird choice [laughs]. When I was shooting the video for “Cold”, we split up in two so I could walk around and do the lip-syncing and stuff at double speed and then you slow down by half and the lip-syncing is at the right tempo and movement is also by half. It’s a really good technique, right? But we released that “Cold” at double speed sounded like “Jolene” [laughs]. This is a bit strange, so we thought “You know what? Let’s do a cover of “Jolene”. This idea came about in January when we were filming the video for “Cold”, now that I think even before because it must have been last Christmas of the last year that we had the idea for it. It kinda came around to using it for ages and then, this opportunity to re-release the EP came up and yeah, I put it together quickly at home and it was that.

I discover that in December 2019 it has released its first collaboration with MONO and it’s called “Exit in Darkness”. Personally speaking, I saw MONO live and I was wondering how the project came about. I mean your voice plays their music…

I’ve been able to attend one of their shows and I was really excited to release it. Well, I first met MONO physically at Roadburn and they were performing their special gig with the string quartet and I was performing cello with Jo Quail and two other players. So, I met them first there even though we share the same booking agent and some other team members. We were kinda introduced by email very briefly and my EP was sent only in case they might enjoy it, really. When it came to the Roadburn show, I remember playing our first gig and then leaving “Oh goodness, I saw MONO” [laughs] and there were like 250 people in the room and suddenly, “Ooooh, here’s MONO“ and I didn’t expect it at all. So, we started by realizing that we have a lot in common in terms of how we like to treat instruments, the melody, and harmony. You know, this kind of treatment in space. You know what, let’s do something and I sent to Taka a little song and thanks to the technology, he was able to work in it from Japan while staying here and while they were on tour in The States, he kept sending stuff and I’m over here doing this. It’s amazing that is possible now, so we worked on that and in July, we regrouped and we had just 2 days in the studio and we have simply done that. It was amazing.

Recently your music got compared to artists like Chelsea Wolfe, Emma Ruth Rundle, and Louise Lémon. So, I don’t like comparing any artists because any artist is per se different but in truth were your musical influences lies?

I would say mainly from classical music because I spent many years of my life studying music, I even attended university and at the time, I considered playing the cello even for popular music as the worst option. So, I thought to play just orchestral and then, I found myself performing for other people, I found the guitar and said to myself “Fuck it, I’ll try it”. Subsequently, I started to write songs as a way to teach myself the guitar because I never learned before.

So, originally, you are a piano and cello player, right?

Yes, indeed and then, I picked up the guitar. There was one on my street, someone had kicked it out and I think he didn’t realize that you could repair it. I think it was a gift and it was just leaning up against the wall and it had a little sign somewhere laying on the strings saying ‘Please take me, adjust me’. It needs work, I thought, and I took it. My friend kindly helped me to fix it and in a way, it kinda made it new again. I started to learn new stuff and it was that.

My last question is like a sort of memory: you have recently toured with Sister of Mercy, so, which is the memory that you cherish the most of this tour?

Oh my goodness, there are a lot [laughs]. There is not any particular moment but it’s the combination of it. It’s very rare to find yourself in this several different ways. You meet so many people in one go: you meet the band, the crew, everybody is so welcoming, so embracing and friendly. And everybody is also so encouraging because you know I’m a new artist and I’ve not done this for a long time while these guys have been going on for 40 years. They are such well-organized operations and to come into that and be embraced in such away. You know, I got the chance to write songs with them and a lot of things I’ve never imagined to do also to even consider and allow me to do that, it was really wonderful. What I cherish the most is the whole experience in itself. You know, I’m still in contact with people, for example, one of the guitar players is coming here just because he lives here and it’s nice because we kinda keep up with each other.

This was my last question and I usually close with my traditional one here as it follows: with this please be free hi to your fans and our readers and once again thank you for the interview, this is your space now.

Thank you to everybody who’s reading this interview and I still feel really overwhelmed and are aware of what I do, so a huge and welcoming thank you to people who are making time to listen and enjoy my music.