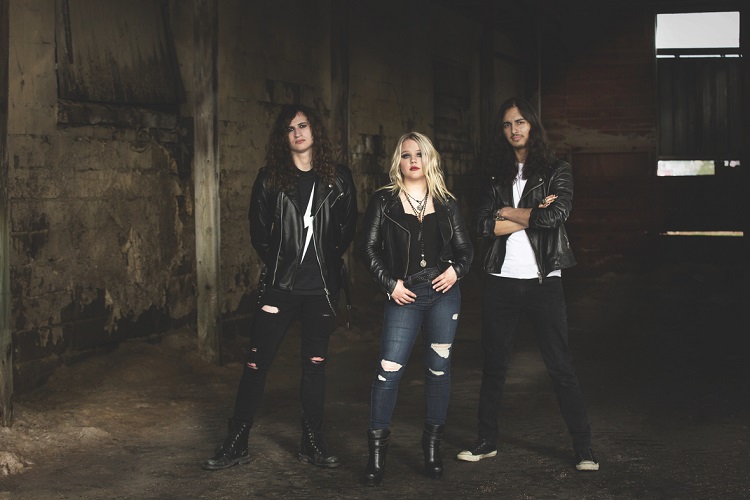 What has started as a solo endeavor for North Carolina based bassist and singer ABBY K, now it’s shifted into a hard rock/heavy metal band. For this occasion, the singer herself, the guitarists Crispy Borrell and Diego Vargas sat down to recollect with Femme Metal Webzine the band’s beginning and what’s in the pipeline for the future. Enjoy!

Hi Abby, welcome to Femme Metal Webzine. How are you? And how is this strange period treating you?

For those who are not familiar with you guys, would you like telling us how did your musical adventure start?

Abby: So, until 12 years old I was a huge gymnastic athlete. Due to this, my highest hope was to participate at the Olympics or attend college through a gymnastic sponsorship. Until that moment, gymnastic have always had the priority.

But, one day I woke up and I felt the need to go to a concert. I wanted to watch a KISS concert. And I went there with my father. After that, I realized that I didn’t want to continue my adventure with gymnastic. Instead, I’ve decided to start new one with the music.

Crispy: Since I was a child I love music, and around the age of 8 I find out in my father’s CDs collection Van Halen’s self-titled debut album.

The opener of that release is “Eruption”, and I was completely captured by it to the point that my dream was to become a guitar player. I didn’t care how much it would take to reach my goal but the only thing I wanted was that!

Diego: Instead, for me, is that I always loved music, but I never been so conscious about it until I was 9. Everything happened one day when I was on YouTube and on the sidebar, it keeps recommending me Guns’n’Roses “Welcome to the Jungle” video. So, I played that album and I got completely enlighten. It was the coolest thing I ever listened to. After that, playing guitar was and is the only thing I wanted to do in my life.

You know, Crispy and Diego are the newcomers here. And, how did it happen that you two crossed paths with Abby? And when did you understand that this was the right opportunity for you guys?

Crispy: Yeah, through Instagram. But, before reaching out to her, we have been fans for some quite time. In the end, all the pieces fall together because then Diego come. The rest is history!

If we exclude the new single “Dodging a Bullet (I Swear)”, 4 singles are already out which are “Pay Attention”, “I Thought That I Love You”, “Rock the Rock” and “It Should Have Been Me”. What can you tell me about these songs?

Abby: Up until now, I’ve written all my music. And I’m just introducing them now to the song writing process. Instead about the singles, I feel they are correct because, for example, “It Should Have Been Me” is about me when I was auditioning for a band, and they gave me false promises.

Even if I’m 18, I’ve experienced a lot and COVID forced me to think outside the box. For instance, attempt to put myself in another people prospective. From this idea, the single “I Thought That I Love You” born. It relates about a breakup that I still I haven’t experienced. The same is with “Dodging a Bullet (I Swear)”. During the quarantine, I worked harder on my song writing for being able to reach out a larger audience.

Will all the songs previously mentioned be part of ABBY K’s upcoming full-length?

Abby: Hopefully, we’ll release our debut album in Spring 2022. We’ll have in total 4 singles and so far, which 2 of them are “Dodging the Bullet (I Swear)” and “Pay Attention”.

As I mentioned before, “Pay Attention” will be on the new upcoming album. What should the listeners expect? And how is going so far with its production?

Abby: So, we all located in different parts of the US. I’m originally from North Carolina while Crispy is based in New Jersey and Diego still lives in California. For this reason, there was no meeting for recording “Pay Attention”. We had absolutely no idea how we were, and the song was co-produced by me and Crispy. While, for “Dodging the Bullet” we decided to go in Nashville in the studio together with TESLA’s drummer Troy Luchetta, Jim Kaufmann, Ted Jensen and Brion Gamboa. Indeed, Crispy was sad that he didn’t get to produce that [smiles].

Crispy: I was literally over the moon to work together such a team.

Now, that you mentioned about this amazing team, I wanted to ask you: how was working with Troy Luchetta? So far, what did you learn from this experience?

Abby: So, Troy played the drums on 3 of our songs and produced them too. It was cool because it was our first time in a professional studio. The other times we have simply recorded in our bedrooms. Also, what was interesting was to see what ideas Troy has brought to the table.

For example, the version of “Dodging the Bullet” isn’t the original one. Together with him, we came up with “Dodging the Bullet” version 2.0. He has completely re-arranged it. Practically, we entered the studios as real amateurs and the end of this experience, we have learned a lot, almost everything.

At the end of the day, which is the most important lesson that you got from this experience?

Crispy: Firstly, I’d like to say that even if you think your song is perfect, it’s always good to have someone how can it listen to it and offer feedback. And, as far as guitar playing, I think that both lead guitarist should play the same part on the right and left side. But Troy was literally against it because each side can play something similar with its own identity. And, in playing like that, it helps the song in sounding wider, bigger, and in-your-face.

So, guys, which are your plans in terms of promotion and touring?

Abby: Right now, we are playing a small tour in the area and hopefully, next spring after the release of our debut, we would like to play a big full US tour. Of course, we aren’t sure because it depends how the album will be received by the press and the audience. But we want to get out on the road.

Unfortunately, this was my last question. Please feel free to conclude this interview as you wish.

Everybody: Everybody at can find us at our social medias and our official website. Thank you for having us.