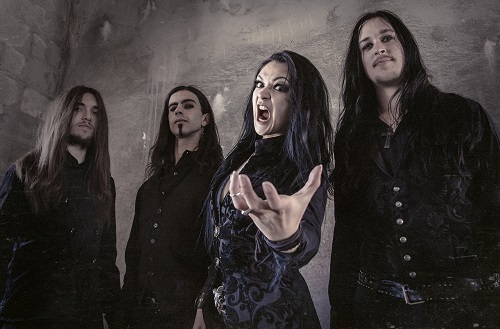 From Boston, Massachusetts, the band Seven Spires is one of the most promising metal bands on the horizon. The band is made up of charismatic front woman Adrienne Cowan, guitarist Jack Kosto, bassist Peter Albert de Reyna and drummer (for the live shows) Chris Dovas. Seven Spires has recently released its amazing full-length debut, “Solveig”. For this record Seven Spires set the bar high for themselves with an epic concept record. With this record, they have far surpassed the bar and released a complex, and fully enjoyable piece of art. Recently, Adrienne Cowan spoke with Femme Metal to give her thoughts on Seven Spires, “Solveig” and more.

Your debut “Solveig” is one of my favorite albums to come out this year. For those who haven’t heard it, how would you describe it?

I would say that it’s an emotional roller coaster. It’s very dark and theatrical.

“Solveig” is a concept album. Can you talk a little about what the story is about?

It follows the journey of a lost soul through a new Victorian underworld, ruled by an ancient demon. In this underworld, you can basically trade your freedom for eternal bliss. This soul does that and realizes after not very long that he has become desensitized to joy – and that’s pretty shitty (laughs). He is looking for an escape by any means necessary.

The title of the album is “Solveig”. What does it mean and where does it come from?

It’s an old name from the cold north. One of the meanings is literally, the way of the sun. When I was looking for a title for the album, I already knew that I was looking for a name with celestially ties. I really liked this one, because it works with the concept; I can’t really explain too much, because of spoilers, but then also, I did some research on it to see if there is anything horrible that was also named Solveig. It turns out there is actually a really beautiful classical piece by Edvard Grieg called “Solveig’s Song”, that is actually the inspiration behind Kamelot’s “Forever” – that’s a very special song to me, I guess. So, it has a really cool conceptual meaning and also carries some personal weight for me.

One of the things about the record that I really loved is that it is musically diverse, but all within a metal framework – I use songs like “Cabaret of Dreams” and “Closure” as examples. Was that the intent going in when you started making “Solveig”?

Yeah, absolutely. Our bassist Pete (Albert de Reyna) is all about writing music without limits, particularly genre limits. I also, as a songwriter and a storyteller, I think it’s really important to use as many songwriting tools as possible in order to best express an emotion or a scene in the story. It is difficult to approach writing what is basically an opera with only, for example, power metal or only melodic death metal or only black metal. Some bands are really good at it and some people, like me, like to have a lot more variety and different colors.

Did you start out thinking that you wanted to write a concept album?

Kind of, I guess. I had all of these songs that I was working on before I met Jack (Kosto), the guitar player, before the band that was even fully conceived, I guess, so I had a bunch of songs that kind of had similar themes running through them and they became “The Cabaret of Dreams”, “Ashes” and “Burn”, and so the whole story just kind of wrote itself. I guess I didn’t plan for it to be a concept record, but there it is.

Musically, vocally, and lyrically, “Solveig” is as epic as it gets. Did the record turn out like you envisioned it would when you started the process or is there anything you would change?

It came out better than I could have ever hoped, I’m so thrilled with it. The mixing process took a long time, because when Sascha Paeth and Miro Rodenberg mixed and mastered it – when they got the mixes, Avantasia’s “Ghostlights” had just come out and so they were busy doing their world tour and doing Euro-Vision and stuff. If I would change anything on the album – and I think I speak for all of us – I would update the actual recordings to better reflect our level of musicianship now, but I think we’re all still proud of our work on it.

How has the fan and media reaction been to “Solveig”?

I’m so happy to say that it has been extremely, overwhelmingly positive. I think we are all humbled by the positive response that we’ve had so far.

Do you have any tour dates lined up, in the future?

We have a handful in the North East. We’re going to New York next week – that’s where we’ll start. For the rest of this year, I guess we’ll continue playing in the U.S., and then next year we are looking to Europe and beyond.

You filmed videos for “The Cabaret of Dreams” and “Paradox”. Do you enjoy the experience of making videos?

Yes and no. I love to see the final result, but making especially the performance parts in the video, you have to perform the song at 100 % over and over and over again, and make sure that your lip synching is perfect or whatever. By the end of the third take, I don’t know about the rest of the guys – but my back hurts so much and my legs are aching, but it’s totally worth it and it is always really fun to work with the guys who filmed it – Jonas, he’s from EmVision productions – he’s really fantastic to work with.

Your vocals are really amazing on this record. Who are some singers that you look up to and admire?

I really, really like Roy Khan, the old singer for Kamelot, that’s not really a secret, I tell everybody that. I am not really influenced by her, but I really love Elize Ryd from Amaranthe. And I really love Adam Lambert.

We’ve come to the end of this interview, Adrienne. Thank you so much for taking the time to talk to us. Do you have any final words for our readers to close this out?

We have this group on Facebook called the Seventh Brigade and it’s our group of core – I don’t want to say fans, because they’re more like family to us – but that’s where we hang out when we’re not on the road, so if you picked up the album and dug it and want to virtually hang out with us, please feel free to join. Thank you so much.