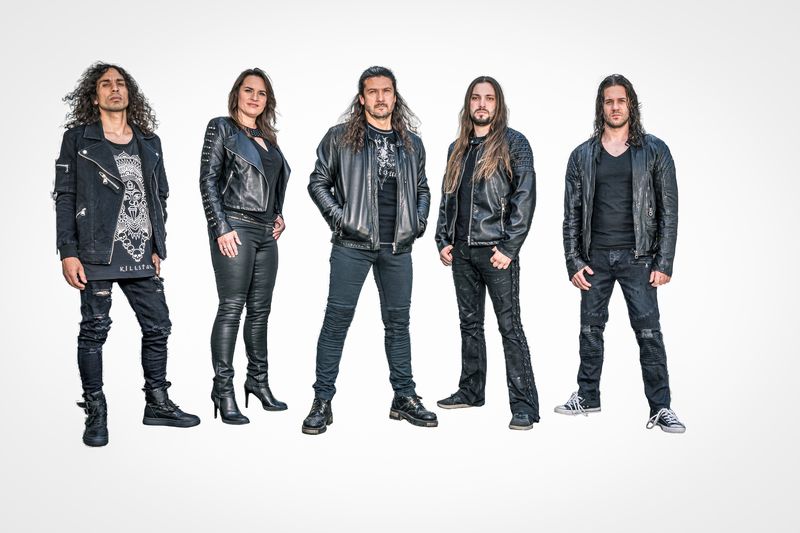 As per Almanac‘s tradition, what you should expect from their releases is purely a majestic sound and a true lyrical ride spanning different but similar eras. And “Rush of Death” totally keep up the expectations. Behind this great magnificent vision lies the great genius of the Belarussian artist and renowned musician Victor Smolski. Read with us this interview to learn more about this new release of this amazing power metal band and the recent line-up developments.

First of all, Victor, welcome back to Femme Metal Webzine. How are you and how this busy period is treating you?

Perfect, perfect. Everything’s fine. I’m really happy about this new release and I’m satisfied with the results. I’m looking forward to going on tour and about this, we start playing this Saturday on my birthday, it’s already a sold-out show and everything’s great [laughs].

On 6th March, it was released Almanac‘s third album “Rush of Death”. What you can share about its general production?

You know before I started composing this third album, I stopped to think and tried to understand music and what I wanted to say with the album. I thought about what my ideas were, what was my style, what was the best that I did in a thirteenth long rock-‘n’-roll career. So, maybe it was my crazy solos, my heavy riffing that I did with Rage, especially “Unity” and “Soundchasers” or those orchestrations and vocal parts that I did with Lingua Mortis Orchestra on “LMO”. I put this all together and begin composing with this feeling and I think you can hear on “Rush of Death” all my history. I like it very much and I think it turned out to be really heavy because of our tour experience and of the new line up. I also split the album into two sections: one without orchestrations and the other one is a suite Lingua Mortis part two but I’m very happy about the balanced sound because both parts have similar energies.

Well, you mentioned a couple of new things like the line-up and the suite Lingua Mortis part two and I would like to start by asking you to introduce your new band’s members which are Patrick Sühl and Kevin Kott, so what you can tell me about them?

You know, in 5 years of Almanac‘s history, we changed some musicians because of our increasing amount of work commitments and this happened by chance. Naturally, our time schedule started to be more demanding and this turned out to be difficult for some musicians to cope with. For example, I’m referring to our former vocalist Andy B.Franck which has a normal regular day job and he’s not allowed to go on tour when he wants and take our other former vocalist David Readman which he’s involved with several bands. While in the case of the drummers and bass-players in the studio were good but in a live setting turned out to have some issues. Every line-up change makes Almanac stronger and better. Well, now about Patrick: he’s a young singer who we have already toured during our tour in the small clubs and stadium shows in Asia and Russia last year. He does a perfect job and he has a lot of energy. While Kevin is a fantastic drummer and this combination between Tim on bass and him is so nice because these guys aren’t only great musicians who can play my ideas but they inspire me. They bring me a lot of new ideas and really often, they show me how we can work together during the arrangements. They are just some really fantastic musicians and for me, it’s just awesome to work with them. I would like to add more singers because I love to work with many different singers and I like to compose for different voices. Having more vocalists in a line-up can offer you more dynamicity, colors and I invited back Frank Beck from Gamma Ray to sing on this release. He really likes it so much and he’s also touring with us. I additionally invited the death metal singer Marcelo Junker and I like this color so much because it’s kind of a unique mix between Patrick and Jeannette and its outcome is quite heavy. I think it’s a really great combination between the musicians and the singers.

Do you mind sharing with us more details about the suite “Lingua Mortis Part 2”? I find it also quite peculiar and at the same time, it does offer a musical equilibrium that deeply connects with who you are and who you were in the past…

You know, Lingua Mortis started already when I was in Rage and it was a great experience for me because I did the recordings and played live with the orchestra from my hometown, so most of them are friends which I have shared my studies with. Of course, it was a great experience and at the time, I worked together with my father too. It was something really personal because we were in the studio together and he helped me with the recordings. I want to dedicate this suite to both my father and the orchestra because we recorded in the same studio and for me, it’s always about recollecting good memories. Personally speaking, it’s always interesting to work with an orchestra due to this combination between heavy melodies and the classical background. It’s everything really nice but I don’t want to completely change the sound and I would like to maintain the same power as on our CD and I think the overall result was great. You cannot notice any differences but I enriched the sound and made it more open and dynamic. All these elements are an added value to the story because it perfectly fits the historical concept of the album. Mostly, the “Lingua Mortis Part Two” suite deals with gladiators and I want to keep up with it as I did it on the previous album “Tzar” and “Kingslayer”. Actually, I was looking forward to an interesting story and I found them quite intriguing because people perceived them only as slaves. However, this is not true because a lot of gladiators were some big heroes, they did enjoy what they did and they weren’t exactly interested in being freed. For example, “Soiled Existence” is about Flamma who was a very popular gladiator that won more than 30 times. After so many winnings, he received the chance to be free but he decided to give up on it and continue to be part of the show by risking his life till the end of his days. Instead, in the first of the album, I jumped into present days and I talked about more than gladiators and for example, I talked about race drivers and in a way they share a fil rouge with the ancient gladiators because they fight really hard on the race track until the death and it’s quite spectacular for the audience. They always want to see crash and blood and there’s something important that once Niki Lauda said: “There’s no friendship there when you race, you have to fight”. That’s it. I know exactly what I’m talking about because for more than 25 years I’ve been a professional race driver and I won a lot of win cups but at the same time I lost a lot of races and I had a lot of car accidents. I know exactly how it feels. You know, when you are a race driver the closer you are to death the more alive you feel [laughs] and it’s quite similar.

I was curious to know, at least from your point of you, how “Kingslayer” and “Rush of Death” might be lyrically connected with each other and in which way?

You know, with “Tzar” the main theme was the Russian Tzars while “Kingslayer” can be seen as a sort of continuation but it has a worldwide focus. Of course, the stories share some similarities and are all-historic related which sometimes can be terrible and we never learn from this, we always repeat the same mistakes [laughs] and the same problems keep on going in the present time. So, all this history is nice to read for me and I think this ‘blood, sweat and tears’ and adrenaline fit perfectly to my music.

In the special edition of “Rush of Death”, we can find also a bonus DVD that features different shows and selections. Would you like to tell me more about how you came up with this idea? Because usually with that amount of material, you tend to release a standalone DVD, not a bonus one…

Yeah, you know, I wanted to create a really good nice package for my fans. So, it’s not about releasing a lot of things and exploiting my fans. I really want to present something very special because you can listen to and watch a lot of stuff from Spotify, YouTube and so on but this kind of package CD/DVD is something very special and we put a lot of energy into making this product good as possible. Actually, the bonus DVD is huge and it consists of a complete show in Korea at the Jeonju Ultimate Music Festival with these amazing pyro shows. There’s also this documentary shot in Plzen, the Czech Republic during the Metalfest Open Air and a sold-out in my hometown in Minsk, Belarus. On a final note, there’s a lot of stuff and I just hope that my fans will enjoy this package.

In February, it was released the first single “Predator” which also features a nice lyric video. Which insights can you share about the song?

Yeah, it kinda reconnects to what I’ve said before or better, what Niki Lauda said “There’s no friendship there when you race, you have to fight” and “Predator” delves into that kind of feeling. It was recorded live and the sounds of racing cars that you can listen to originally derive from my cars. The video that you mentioned before, it also shows some studio recordings because most of the album recordings were live in the studio which might look a bit old school.

What 2020 has in store for Almanac in terms of touring and promotion?

Between March and April, we’ll tour together with Lordi for almost 4 weeks all over Europe and when we’ll come back, we have already some single shows planned and some festivals too. So, there will be a lot of live shows and promotions activity [Important note: this interview was conducted before the COVID 19’s pandemic].

So, Victor, we are almost at the end and with this please be free to say hi to your fans and our readers. Thank you so much for this amazing interview, Victor.

Thank you so much. Thank you so much for your support and greetings to all the fans, please just check the special CD/DVD package because it’s really amazing and I seriously gave my best on this powerful combo. I hope you’ll enjoy our new CD and I hope to see you live.