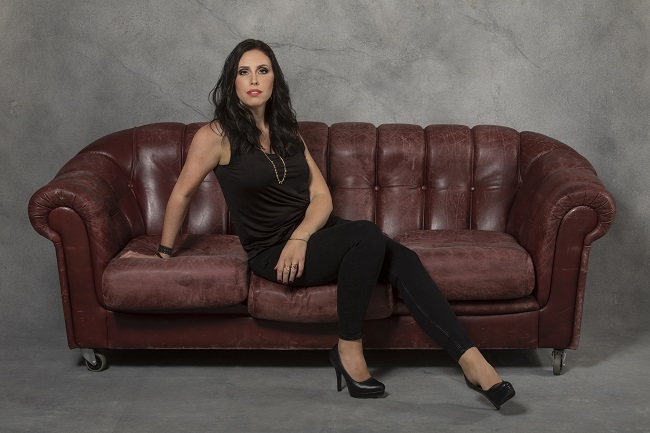 Besides being the singer of the symphonic cinematic rock band, The Murder of My Sweet, Swedish singer Angelica Rylin is back with her second solo album “All I Am” always in collaboration with Italy’s Frontiers Records SRL. All in all, this new release marks the personal and musical development of the artist. Let’s learn more about in this extensive interview. Enjoy!

Hi Angelica, how are you and how this precarious and strange period is treating you?

Hi, thank you so much for having me. I’m fine, happy, healthy and my family is safe but it has been really a strange year for all of us. In some ways, on a personal level, even challenging and hard because you would like to meet your friends and your family.

When you want to do that, you have to be quite responsible to attempt to be safe with you and the others. Of course, social distancing is complicated.

So, we’re to speak about your second solo full-length “All I Am”. What can you tell me about its general production?

Well, this is my second solo album and it has been quite some time in between my debut and this release. Simply, the reason for that I’ve been busy with my band, The Murder of My Sweet. Throughout this span of time, we have released a couple of full-length. Secondly, two years and half ago I have become a mother which is quite a life-changing and big event. So, it took me some time but I’ve finally managed to deliver another full-length.

In this case, to say, my solo albums differentiate a lot from my main band, The Murder of My Sweet because with my band I’m fully involved with the full process (i.e., the ideas for the songs, writing the lyrics and creating the music with Daniel [Flores]) while with my solo albums, I involve and work with other songwriters. For example, I get songs to listen to and then, I decide if with that song I can stand for it and if I can have my voice sing its words and message. About this, on my new album “All I Am”, I’ve worked with a great bunch of songwriters such as David Fremberg, Kanata Okajima and Anders Wretov which they collaborate with a publishing agency called Roasting House based in Malmö.

Usually, it provides me with songwriters and a recording studio. So, many of the songs come from that agency and their songwriter’s teams. Additionally, I’ve worked with a talented Brazilian author called Pedro Camargo. Naturally, working with external authors, it requires me to step out of my comfort zone and make an effort to make their songs comply to the way I would like to do it. That’s the basic difference [laughs].

You just mentioned the fact that you have collaborated with different authors and going through the credits between “Thrive” and “All I Am”, you chose to work together a diverse team. Why did you opt for this solution?

For the previous release, my idea was to feature a more 80s/AOR musical direction with a slightly modern sound. Of course, the songwriters with which I worked on “Thrive”, Alessandro Del Vecchio and Harem Scarem’s Harry Hess, tap into more that musical genre. So, it felt natural to approach the Roasting House team to fulfil a more modern sound. Essentially, my goal was to sound a combination of Bryan Adams, Daughtry and P!ink.

Perhaps, it looks like a strange one but I think, we have successfully nailed it. Mainly, it’s this reason that led me to contact those specific songwriters. I consider it a strategic decision in that way and on a personal note, I was introduced to these musicians and songwriters through Daniel [Flores] and then, a musical connection born.

Definitively, if you can draw a parallel between “Thrive” and “All I Am”, which are the main differences that can you find between these two albums?

In respect to “Thrive”, the main difference is that in “All I Am” is featured a much more developed modern sound. However, on a personal perspective, if for “Thrive” represents a journey through my musical root, so, it means going back to my early times and recalling the music with which I was raised with, while for “All I Am”, due to my motherhood and my adult life, I became hopefully older and wiser [laughs]. So, “All I Am” is an album more mature in that way and I wanted the lyrics meaning to portray that.

Also, the idea behind the album title is about coming with to the fact that who I am is quite a complex personality. If you think about that, we all are complex. In fact, “All I Am” embodies myself as a mother, a woman but also as a singer, a businesswoman and a daughter. I can be both strong and confident and I go for what I want. At the same time, I’m fragile too, we all are in these strange times. In conclusion, it reflects what I am right now. I consider “Thrive” more a tribute album while “All I Am” is a statement of who I am now.

Out of “All I Am”, there were released two singles: “Calling” and “Beat Them All”. What insights can you share about these particular songs?

Well, “Calling” is the first single and it’s mostly about being frustrated and about the world we live in today with all the current environmental and political issues. I’m trying to scream out my lungs but nothing is really happening. Also, it felt really strange to record the promo video for because we had to shoot it during the pandemic. I had to be really mindful about how you do it, about the team you bring with you, about the safety measures and comply with rules too.

Afterwards, we decided to record the video in the summer even if the global situation didn’t improve. It was really hot outside, around 30-35 ° C, of course, we brought a lot of water to stay hydrated and we chose to shoot in 4 different locations. In the end, we had a wonderful day but we’re exhausted because of the heat and the used safety measures. Instead, for “Beat Them All” expresses the core of my business life. I work really really hard for what I want and you have to believe in yourself, follow your heart and simply do what do you think is right.

As you mentioned before, besides being the solo singer for you own project, you are also one of the main members of the symphonic rock The Murder of My Sweet which back in 2019 has released the full-length “Brave Tin World”. Briefly what can you recall about its overall production?

Actually, with all the albums of The Murder of My Sweet is me and Daniel Flores who is taking care of the whole recordings. So, we are always brainstorming together in the studio about the song titles and the melodies. Between each other, we exchange ideas.

Then, we keep building on and on and most times when we work, we do it in a faster way and once an idea flow, they come all of the sudden. From then, we started to record the musicians and my vocal. In the next step of the process, Daniel deals with the mastering, the mixing and the production. That’s basically how it works with my band.

What the future holds for both your solo project and The Murder of My Sweet and how the pandemic has impacted on both original’s plans?

At the moment, it’s very difficult to plan any live gigs or tour. So, we have just to hope that people find our music online and hopefully, they words gets out. I’m very eager to go out and play live. I probably think that’s the reason why I exist [laughs], I love performing live.

But, for everyone, we have to wait until is safe. Up to now, we are also working on new The Murder of My Sweet’s release. Surely, for next year we foreseen its publication and we’ll see after that, how the global situation will look like.

So, Angelica, we’re at the end of the interview. Please be free to say hi to your fans and our readers. Thank you so much again.

Thank you very much for talking with me today. I really hope that you’ll enjoy the album.