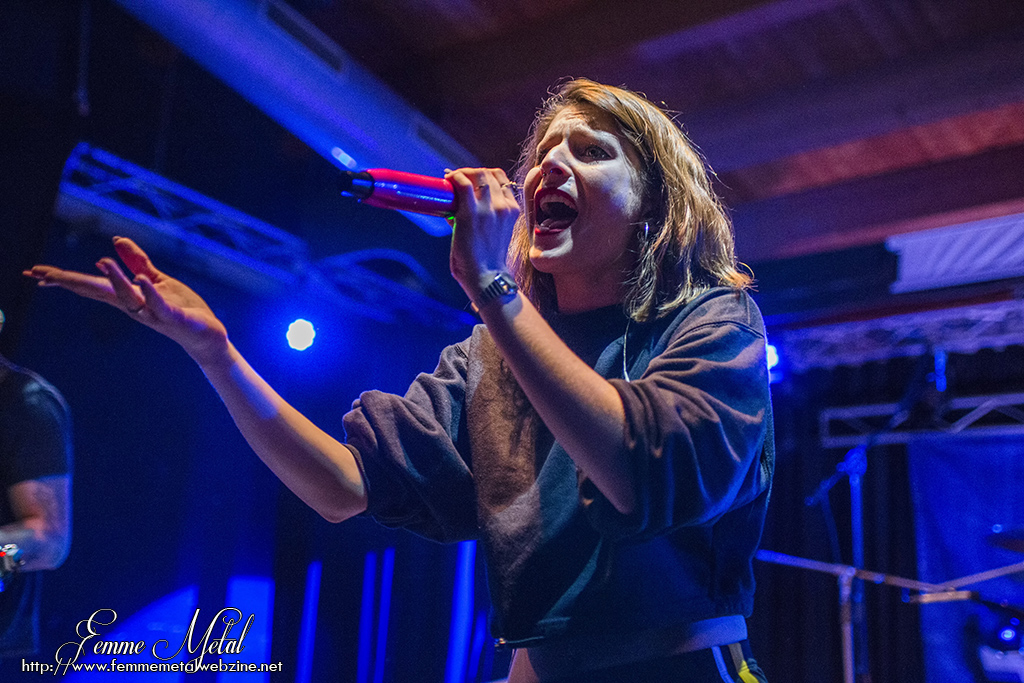 Appreciated by the majority of the Italian and European audience, the Spanish metalcore/alternative metal band Ankor is going to please the Italian metalheads with a brand new (and quite unpredictable!) live show. On the occasion of the latest Milady Metal Festival edition, the band, who was previously announced as the co-headliner of this event, has been forced to play as the very last act of the great lineup offered this year as a result of a small (and still not clarified) unforeseen difficulty with the headliner, Mark Jansen’s Dutch project Mayan. Still unclear is the reason behind this choice that was also announced last minute, but the quintet from Catalonia, who has played in front of 20 people, has not lost the enthusiasm and it offered a really good performance! Femme Metal now presents you an interview we conducted a few days after the latest edition of this fest.

Hi Jessie, hi guys and welcome to Femme Metal Webzine. It’s a great pleasure to host this chat with you. How are you doing?

Jessie: Hi! The pleasure is ours. We’re doing great, in the middle of our tour right now.

May 4th has been a very important day for you, since you started your new European tour. The first show has taken place in Mantua for the new edition of the Milady Metal Festival. In these days you had the chance to pay visit to countries like Spain, France and Germany. How do you feel like coming back on the road? What are the feelings that accompany you now?

Jessie: It’s always amazing to be on the road and I feel very lucky to be able to share this experience with the people I consider to be my family. It’s always a great adventure!

Is there a place/venue where you feel like being home or you feel more connected to?

Jessie: We feel connected to various places for different reasons, and Mantua is one of them. We have played in Arci Tom three times and they have always made us feel welcome and at home, it’s a pleasure to discover places like this. And we hope there is a fourth time 😊.

If I’m not mistaken, before this new Italian show you had the chance to play in our country (Italy) in order to give the people a great show. Is that right? What kind of reception did you get from the Italian audience?

Jessie: We love Italy. Its people, its food…everything. People are very receptive and every time we come we meet people who didn’t know us before but now love us.

How important is the support of your fans nowadays? I’m not talking about live shows, but also about the general participation!?

Jessie: It’s everything to us. We wouldn’t be where we are right now if it wasn’t for them in a huge part, Of course there is a lot of hard work coming from us but in the end, if you don’t have supporters you won’t make it very far. We are very thankful for having such amazing fans, fans who follow us throughout a whole tour, who support us every day…

Your latest record is called “White Dragon” and it has been released a few weeks ago. After such a short period of time, what kind of appraisal can you make about the album? How has it been welcomed by the fans and the press? What about the sales, as well? I guess it was well received!

Jessie: Well, it’s been two years since we released our previous album and our feelings and lives have changed a lot since then so we had a lot of ideas and things to write about. In the short time since we released it (26th March) we have has a lot of positive feedback, the sales are going great and people love it as much as we do. We couldn’t be happier.

I do like the album title a lot. What does it refer to?

Jessie: It comes from the movie Blade Runner, which is set in 2019. They have dinner in a Japanese restaurant called White Dragon Noodle Bar. We chose this name because we are in 2019 already and the future we were supposed to live isn’t here, in fact, it seems like we are going back in time, this is what our song Hill Valley talks about. Oh, and we love Japan haha We toured there in December 2017 and can’t wait to go back, it was one of the best experiences we have ever lived.

We could say that Ankor is indeed a multi-ethnic band, since each band member comes from a different country: you come from Bristol (UK), the drummer from Brazil, David and Fito from Catalonia. What has been your artistic (music) background? How did you manage to create your own sound, given the different influences that have forged your background?

Jessie: I think that is exactly what has created our own sound, each of us having so many different influences but liking the same stuff at the same time has made it easier to create something different, mixing all the styles that we like in one album. We all like bands like A Day To Remember, Avenged Sevenfold, Pierce The Veil, I Prevail, we also like movie soundtracks and all sorts of music!

A thing I do really like about you a lot is the continuous interaction you have on your social medias, especially on Facebook, where you have kept your fans updated constantly giving some hint about the tracks of “White Dragon”, announcing the song titles or some other little detail. What kind of feedback did you get from your followers? What kind of relationship do you have with the people who keep on supporting you from all around the globe?

Jessie: We like to be in touch with the people who support us. As I said before, we wouldn’t be where we are right now if it wasn’t for them so it’s the least we can do. We also like to know their opinion, we like answering any questions they may have…

If I’m not mistaken, your first record, “Al Fin Descansar”, was mainly sang in Spanish. The following ones, indeed, had a different change, because you’ve started singing in English, since you reached out a more International audience. What about this choice? Why haven’t you decide to continue with your mother tongue language

Jessie: Actually, my mother tongue is English and I have always written and sung in English, it’s the language that I feel most comfortable using in music. Also, you can get to more people singing in English than in Spanish, but it’s not the main reason. When Ankor started, they sang in Spanish indeed, but times have changed and so have we!

Since your second album, “My Own Angel”, you’ve gained a lot of satisfactions. If I’m right, right after the release of the record, you’ve taken part to some big festival who saw you next to Guns N Roses, Marylin Manson, Nightwish… Indeed it’s very rare to see a “small” and young band having so great reception! What do you remember about that experience?

Jessie: It was an amazing experience! Lat year we had the pleasure of performing at Download Festival as well and it was incredible, it’s a great experience to get to play at the same festival as bands we’ve admired since we were kids!

Meantime, you grew and got some recognition also in Europe and your sound has also been changed: how did Ankor’s sound develop over the years?

Jessie: We have changed over the years, everything does. And we like to experiment with things we like, we don’t like doing the same with every song and every album. New music and new styles are created over the years, and with that, new influences.

Compared to the debut album, what do you think that have been the biggest changes you have to deal withe years?

Jessie: I would say the band involves more time, more work, some sacrifice, but it’s all worth it as this is our dream and our passion. We enjoy the way, not just our achievements. As I said before, we are lucky to share this dream together as a family, it makes everything more fun.

Jessie: People who love you will always be there to support you and to help you make your dreams come true. So never sacrifice your passion and your dreams for someone who doesn’t really feel that way. It can sound a bit selfish, but that’s the biggest lesson I’ve learnt.

As I said at the beginning of our chat, on May 4th you’ve started your new European tour and we saw you, unfortunately, as the latest band of the bill of Milady Metal Fest.  Can you tell us what happened that day? Why did Mayan anticipate its own performance, forcing you to postpone yours?

Jessie: There were a few problems and Mayan wanted to play first as some members of the van were tired, so we agreed to do it. The problem is nobody said it to the crowd and we didn’t even hear a thank you. But these things happen, we keep learning every day!

Wicked Asylum and Null Positiv aside, did you already know all the bands that have taken part to this festival? What do you think of this festival and the bill itself?

Jessie: We had the pleasure to share stage with these two amazing bands, Wicked Asylum for the first three shows and Null Positiv for the whole tour. We didn’t know them before but we are happy to have met them as they are amazing musicians and we’ve become good friends. I’m sure we will meet again.

What about your future goals now?

Jessie: We’re going to continue touring, we have some really cool stuff to announce very soon. And we’ll continue making music, recording covers and working very hard to make a lot of people know us. We still have a long way to go, but we’re closer every day!

Thanks a lot for your patience and for giving us this spot. The latest words are yours, so I call you to speak!

Jessie: Thank you guys for the interview and we hope to come back to Italy soon!