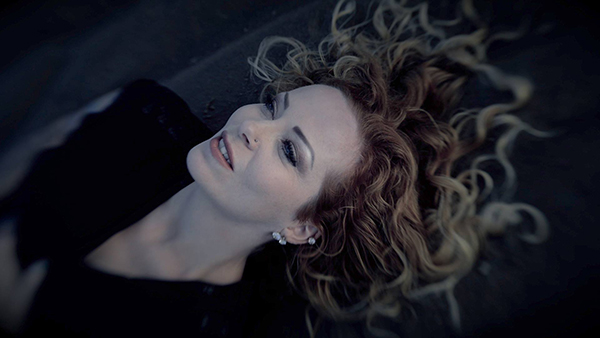 What it was to supposed to be the second album of her band VUUR, due to some life circumstances’ in her private life, it turned out to be one of her most personal and intimate albums ever from her long and varied discography. Also, this album marks her 23rd album in her career. So, which is the best occasion to speak with the artist? Discover with us how her new LP “The Darkest Skies Are the Brightest” which it will be released via InsideOut Music on 26th February, came about. Enjoy!

Hi Anneke, welcome back to Femme Metal Webzine, how are you and how these precarious times are treating you?

Despite, what’s going on in the world, we are actually fine and thanks for asking it. I mean for a lot of people is really difficult situation. Even for us, work wise, it’s complicated because we cannot perform live.

Considering that 99% of my income is generated by my live activity, which it implies a drastic decrease in my financial status. Though, we were able to do few things here and there.

Eventually, we are all aware that what’s going on is a temporary solution. You know, we can still watch positively at the future and working to our music from home. Actually, we’re practicing at home, doing interviews and in a way, we’re still busy.

On February 26th 2021, it will be released your 23rd album in your career, “The Darkest Skies Are the Brightest”. How does it feel to have achieved such milestone?

You know, it occurred to me just a few weeks ago that I’ve released so many albums. Essentially, I never look back at all and I never count my albums. But it made me happy getting a hold of this because I’ve been producing music so much time and I love it. I firmly believe that singing is one of truest passion ever in my life.

I love creating new songs, I love performing live. Of course, it does me really feel joyful that. If we exclude the cover LP “Pure Air”, “The Darkest Skies Are the Brightest” is my first acoustic album featuring original material and, as my fans know, I’ve been playing live with only my guitar so many times.

Naturally, the listeners love it and they kept asking me when I’ll be releasing an acoustic full-length. At the end of the day, that’s the feeling I have now and it proved to be the right moment to do it.

Back in 2015, it was released VUUR’s début album “In This Moment We Are Free – Cities”. And now, three years later, you’re about to release one of the most personal and intimate albums ever. Which is the fil rouge that connects both events?

The thing is that the last album I produced is hugely different from this last one. Actually, VUUR is literally progressive metal at its best. Anyway, I was indeed composing from a VUUR release with the intent to build up momentum and try to create more attention for this new name and new music. Consequently, what I figured out was that if I would have released a second LP for VUUR, we would have surely managed to survive.

However, everything that I was composing was so melancholic, so soft and acoustic that also included some music on the piano and the guitar. Honestly, after listening to the first rough demos, I come to terms with the fact that this was something completely different. To some extent, I convinced myself if I would add some metal riff here and there, everything would have worked out.

Though as the time was passing by, I decided to hold it dear to my heart and just release this album as it is supposed to be. So, I did it and then, I told to the rest of the band. Subsequently, I went to this little cabin in the woods near my hometown where I kept on composing.

Actually, I wasn’t sure about its final outcome because I didn’t have any more a plan to rely on and also because, my original plan completely derailed. In the end, I let my compositions flow and this is what came out. And, I’m still surprised by it.

I can totally feel it from your words. You know, it’s also well-known that music has a beneficial on the spirit of one individual but much challenging is writing it about it?

You know, it wasn’t such a challenge because I didn’t have any restrictions or pressure from myself. At certain point, I even told to the label, the management and the people who surrenders me to just let me write this and we’ll see what comes out. In this way, I took the pressure off myself and, in that terms, I didn’t pressure at all.

You know, what really was left was to write and compose songs. In the end, not all the songs didn’t make to the album and I have a lot of songs on the shelves. And still, I’m writing. So, this period has proved to be quite fruitful and every now and then, I keep adding material.

As I mentioned before, “The Darkest Skies Are the Brightest” is one of the most personal and intimate albums ever. So, from your perspective, how do you feel to expose yourself on front of a lot of people? Perhaps, do you think that it will help someone else in your (past) situation?

Yeah, maybe. The thing is that, normally, I write about my life which they might be both happy and sad and sometimes, it’s just made up. However, like you have said before, this album is very very personal and I have to unfortunately deal with something both in my private and professional life. Even in my marriage.

All of the sudden, all these issues came straight back at me in just a period of one year. Actually, for artists like me is really therapeutic to write songs about these kinds of situations. Additionally, it helps to clear your mind and deal with your issues in a concrete way. Personally, that helped me a lot and when I was finished with my album, which was already during the pandemic and some of the current issues were on the rise.

However, once concluded, if there was seriously someone interested in my bullshit in my life while there was the pandemic and Black Lives Matters going on? Since the big themes will overflow, I was wondering if should releasing it without talking too much about it but, during one of my livestreams shows, when I played one of the newest songs, I received so much reactions from my fans.

Mostly, the feedback I have received were concerning similar experiences as he one I had. In the end, the themes I’m writing about such as love and relationships are so universal. Once again, a lot of people is dealing with the same stuff as I do in my private life. Subsequently, I decided to talk about it and whoever wants to listen to me, I’m sure in the manner I wrote the song, there’s also place for his/her story. You know, it’s amazing that it catches on.

I love the title album because it reflects to something we always take for granted. For example, we take for granted that everything it will always be fine and we never ever consider that something can go wrong. What is the life lesson that you have learned throughout this period?

Well, I think myself as a person that takes anything for granted. I always loved my life according my wishes, so by being a professional musician and having this fantastic family that supports me. Though, there still days where I forgot how much fragile is your relationship, your family life and your work life. If you don’t keep working on it, everything that slip out of your hands in no time.

Maybe because it looked so nice and good, you might lose sight of it. You know, even if I’m a grateful person and I thank God for what I have and what I can do, notwithstanding that you have to keep focusing on who is present in your life and treasure every moment.

Musically speaking, “The Darkest Skies Are the Brightest” recalls me a lot your last release with de Kamerata Zuid, “Let the Light On”. Which role this experience played on your upcoming LP?

Of course, I knew him through de Kamerata Zuid and the string quartet featured here is called The Magic Strings. Believe it or not, one of the violin players in the quartet is Ruud’s wife.

Useless to say, that even The Magic Strings is fantastic and they look great in the video as well. I’m quite satisfied about the outcome because they made my album shine.

What the future holds for you?

Obviously, we’re still stuck inside the house because normally, after an album’s release, I always go on tour. If the proper moment arises in which it’s allowed to physically play, we are definitely planning for the next year and the tour for this album will take longer.

Up to this moment, I’m organizing something online for accompanying the album release in February. Then, as long we’re in this situation, I’ll keep on writing and practicing until I’ll be allowed to tour again.

Unfortunately, we’re at the end of this interview. Now, it’s your space, please be free to say hi to your fans and our readers. Tot ziens!

Well, I’m happy to talk with you because one of the things we can do to fight this struggling period, is to talk with each other and reach everybody through internet and social medias. Once again, I’m extremely happy to do that. Also, I’m very blessed and thankful for everything we have, you know, we have this wonderful life in lockdown.

However, I’m starting to miss travelling, being in an airplane, meeting you and the people abroad. You know, I’m getting this itch like other people for sure. So, when the day comes, I’ll be really really happy.