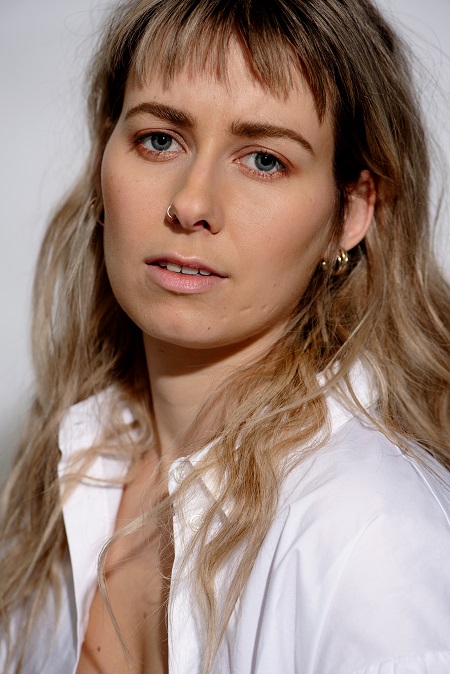 ÁSLAUG – An Interview with the artist

Dutch-Icelandic alternative pop singer-songwriter Áslaug is back with her second EP “thirst” after her debut self-titled EP via V2 Records. As every artist, this current pandemic had an important impact on her life as an artist and as a person which also reflected on her new release. Enjoy it!

So, Áslaug , welcome to Femme Metal Webzine. How are you? And how are these days treating you?

Thank you so much. Indeed, I’m quite happy because my new EP is coming out this week which I’m very excited about that. Musically speaking, there’ s a lot of fun stuff for me. So, I’m really looking forward to.

Obviously, for me as musician everything turned out to be quite tough. You know, being not able to play shows with COVID was quite a challenging time and finally, we’re coming out of this now.

What an Icelandic has to do with Utrecht, The Netherlands? And how did your musical adventure start?

Since my parent moved out 30 years ago, I’m Icelandic but I was born and raised here. So, I’ve been living for my entire life in Utrecht where I grew up.

Music-wise, the music has been always part of my life and more importantly, of the Icelandic culture. Indeed, in Iceland is quite a big part of our culture. So, a lot of people are working in the creative field.

For example, a lot of people create music, play guitars. Even if I’ve always lived here, I grew up been surrounded by a lot of music. I’ve been singing since I was a child and for me, it was quite natural to continue that path. However, when I realized that it would be possible to that for a living, I never doubted, and it was always what I wanted to do.

So, on Oct 1st October you released your second EP “Thirst” via V2 Records. What can you tell me about its production?

With this EP I started a new collaboration with a new producer. His name is Tom Meijer. For this release, I was really looking forward a way for me to develop myself as a producer too. For this release, I wanted someone who was comfortable to explore with me that side. Then, I met Tom and he seemed such open to the point that he really understood what I wanted in my music.

For example, I love drums and a lot of synthesizers and a lot of vocal production. As well, I wanted some analogue elements in my musical structure. Also, for the first time, we have invited some members of my band. It was an amazing experience to do it. Beside all this, it was so nice from him to let me have a part in the production, so I practice better my producing skills. However, if compared to my first EP which had a faster process, “Thirst” had a slower but thorough process whose time served us to create something perfect.

You’ve mentioned the fact that you went looking for a challenge to improve yourself as an artist. Indeed, what did you learn from this experience? And how all this has improved you as an all-rounder artist?

Musically speaking, I’ve developed more regarding the arrangement of a song in its general picture. For example, I’ve learned to think as a drum player and a guitar player by using those elements for the production. But I think all this was more a mental learning curve that throughout the process, I noticed in myself.

You know, it’s funny because having this interview with you I’ve checked your website and, I’ve realized that I have the tendency to push back myself. Especially, when I’m surrounded by male producers or musicians. In those occasions, I really find hard to speak up and to voice my opinion because I feel insecure. It was interesting to notice this during the whole process.

Even if I was aware of what I wanted to say was valuable, I had a lot of difficulty to speak up. But this time, I’ve decided to act differently. So, to put myself on a spotlight and act more confidently. In the end, what I’ve learned is give myself the value that I deserve and take that well-earned space because I matter.

I’m a bit taken aback by this reply because what you communicate and show in your music and lyrics is quite the opposite. What I feel is simply confidence. However, by listening to your reply, I feel that you had to struggle a lot to impose yourself.

Kind of. Though, it’s interesting you said that because in the end, it was the message that I wanted to spread with this EP. Indeed, “Thirst” treats a lot of topics directly linked with identity, self-image and how you feel yourself. And, how the others perceive me as a person.

Once again, I find it quite intriguing what you said at the beginning since yes, sometimes I am confident, but I am not always that. I consider my identity fluid in the sense that I have some situation where insecurity takes the lead and I do talk myself down. But, during the production of EP, I got more and more confident, and I’ve learned that both sides are good.

Even what comes in between. Also, even though I was aware of my value as an artist, songwriter, and performer, I had to start this new process with low expectations. In retrospect, I can add that I’m working on that, and I’ve achieved a lot of goals.

First of all, my congratulations for your upcoming EP. Since I had the time to listen to it, what I’ve noticed is that it adds a further layer on your lyrical aspect and vision about the word ‘relationship’. Even if it was released one year ago, what exactly has changed from the first EP to “Thirst”?

Yeah, it’s a good question. I wouldn’t know because I don’t think my views changed so much between my début EP and “Thirst”. Though, what I think is that with every relation of which I speak on both EPs, there are difference in the way you cope with it. Indeed, every new relationship breaks up with a different person. And that, it has a lot to do with the other person. For instance, if the other person is angry ending it, it might be a struggle.

On the other side, if the person is sad, you might have a chance at closing in a faster way. In general, it’s not my view on relationship changing but every relationship, not just love but also family, friendship, I’ve learned that it’s always dependant on the context, who the other person is, and where are in their life. There’s no one way to be in a relationship or to end it. It’s always different.

Also, on this topic, there’s a sentence that you have stated in the press release. You said that “your identity is malleable and fluid”. Which meaning does hold for you? And did you manage to discover all this with yourself?

It’s correlated with what we were previously talking. However, when I was composing these songs, I noticed that most of, better, all these lyrics are about the overmentioned relationships with different people. In the beginning, it was quite confusing to realize that my songs are reflecting the mood that I was feeling during these happenings. Sometimes I was strong, confident, even angry, or nervous.

All these different feelings indeed made me feel quite confused about myself. Am I strong or insecure? What kind of person am I? And I come to terms that I’m complex. But these questions brought me to the conclusion that for each for these relationships, what I have felt was for different and several reason. It was just a relief to acknowledge the fact that I can be both.

For instance, in the studio another side of me, I feel strong and empowered and the experience of “thirst” make understood a lot about this. What I’m trying to do, it’s to improving myself because this process is still ongoing. I’m trying to accept what I’m feeling, and acceptance is a big part of that too.

Considering the current situation, which are your promotional plans for “thirst”?

About this, a couple of days ago, I’ve announced 4 dates in The Netherlands for the begin of December which include Amsterdam, Rotterdam, Arnhem, and Groningen. I’m super-excited about it but I’m nervous too because it has been a long time since my last live show.

So, Aslaug, we’re almost at the end. Please be free to say hi to your fans and listeners. Thank you so much for this interview.

I literally get the goosebumps at the thought of playing live after so much time. I’m so excited to play and to see people at my show! Thank you!