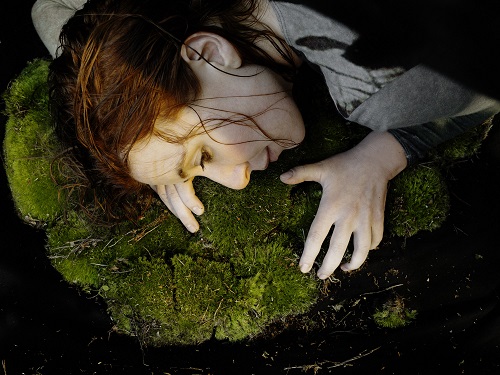 I’ve been literally chasing the Canadian art pop/electronic artist AUSTRA since her previous album “Future Politics” back in 2017. Finally, after almost 4 year, the occasion was propitious: Katie Stelmanis AKA AUSTRA has released her fourth album “HiRUDiN” via Domino Records on May.

What I like so much about this artist, it’s how she expresses her feelings and how really straightforward is with herself. It takes serious metaphoric balls, to expose everything, including bad and toxic love relationships. Are you up for an inner emotional journey? Then, approach with us the world of AUSTRA.

Hi Katie, welcome to Femme Metal Webzine. How are you and how these precarious times treating you?

I mean, I cannot really complain. I’m living in Toronto in my apartment, I’m home and it feels good.

Today, I’m here to enquire you about your fantastic last album “HiRUDiN“ which was released on 1st May via Domino Records. What would you like to share about its general production and when did you start to concoct some ideas for it?

Hmm, I guess, it’s my fourth record as AUSTRA. But, I started writing it after the release of my third record, “Future Politics”. Literally, a few months after. Probably, the process took about 1 year and half of 2 years from the early composing to its conclusive phase.

It was kind of a convoluted process of dealing with myself and subsequently, with other people. I went back and forth between those two environments by collecting material and sounds. After, I had to go through them and somehow, I had to figure out to make sense of all this.

I know that as an album for you “HiRUDiN“ is about personal things. There was a sentence from the press release of which I’m really fond of and you said that “being in a toxic relationship, sometimes it feels like to be lost in a maze”. How did you manage to heal yourself from this dangerous pattern and at the same time, how all this proved to be so inspiring from this new album?

Actually, I kinda ended those relationships before starting making the album. For a long time, I felt like I was involved in some toxic relationships that made me feel sort of constrained.

So, when they ended, I felt extremely free, liberated and that was the energy I brought into the new record. Even though I was reflecting on what happened, in front of me presented itself a canvas on which I enjoyed experimenting with.

So, you feel relieved, I must guess…

For you, the production of “HiRUDiN“ also represented something new because for the first time you collaborated with other musicians and producers. On a general picture, how did this impact the album? And, personally speaking, which meaning holds for you all this?

It was my first time collaborating and it was such a beautiful process. In a way, I was annoyed by the fact that I didn’t do it before. You are always scared to work with the producers because I thought that I would lose some of my own artistic integrity. Instead, it turned out the opposite of that, muchas I ended up working with producers who assisted me in reaching my goals.

Also, the fact that I had other people who offered me other ideas, it was hugely beneficial. For example, it happened that I hit metaphorically a wall by feeling stuck and they would propose me an idea. On top of that, having people that you can trust, it was both fun and enjoyable.

You defined this process in the press release with a specific sentence: “You’re kind of speed dating would for participating in your album”. Is this correct?

[laughs] I was just really into the idea of working with new people but, since I never did that before, I wasn’t really sure to work with. In effect, I spent some time, as later I thought, as speed dating because essentially, I was doing sessions with other musicians that liked me and approached me to see how it might turn out.

Some of the sessions worked out and some of them didn’t but every single one of them, I definitely learned something. In the end, it was fun and in terms of speed-dating, I like to actually date in real life and I wouldn’t like doing something like that. However, for my artistic side, this was a much more enjoyable experience.

Before you mentioned “Future Politics” which it was released in 2017, if compared with your previous album, which are the main differences and/or peculiarities that we can denote in “HiRUDiN”?

Well, “Future Politics” was mainly done in a box, like on my laptop and I was travelling a lot too. I lived in so many places while I was writing “Future Politics”. I lived in Toronto, Montreal, New York and Mexico City. I was constantly moving around and as they say, it was in the box.

Just with a laptop and recording it. Even if I kept working a lot on the computer and travelling too except now, for “HiRUDiN” I spent a considerable amount of time with proper players and instrumentalists. This time, I wanted something real, authentic and tangible.

Out of “HiRUDiN”, there were release two singles, which namely are “Risk It” and “Anyways”. In these days, I’m really in loop with the second single and especially, with the sentence “And the world keeps turning anyways”. Which personal meaning can you attribute to that phrase? It might be quite logical but I would like to focus on its underlying meaning…

I think, this idea of feeling like the world will essentially end and it has a reference about the end of my relationship. So, when you know that a relationship is about to conclude, you can anticipate its ending. It just feels impossible that you continue your life without that person.

And realizing the opposite, in essence that the days keep coming, time keeps moving, its progression can be a real shock when you experience something like that. Also, it can be a good shock because you come to terms with the fact that life goes on despite you have suffered deep loss.

Additionally, I really love both videos of the singles, would you like to spend a couple of words about their making of? Sincerely, I believe that the videos deserve their space here because they reflect you and the lyrics…

Yeah, those videos were really fun to shoot and they were shot in one weekend together with the director Jasmine Mozaffari . She’s a really young film director and she has recently published her amazing movie called “The Firecracker”. After watching and loving it, I approached her and asked her if she was interested in collaborating with me for a video. Actually, the feedback was beyond my expectations because I discovered she’s a fan of AUSTRA.

In the end, she offered to work on two videos [laughs]. We shot both of them in one weekend, it was super-fan and she had also great time. For her, it was the first time that she worked on music videos and it’s totally a different platform from shooting movies. When you shoot short videos, its budget is mostly related to experimenting with ideas, camera and lighting. In the end, we’re talking about 3 or 4 minutes of contents.

As I was said before, it turned out to be quite the enjoyable experience but, also it was cool because usually you shoot everything in one day and then, everybody come and leave. Instead, here happened that we shoot 2 videos in 4 days and I felt like I was in a movie set due to the fact that I was working with the same crew for 4 days. I felt that real crew bond that people refer about when everybody is on set.

The song “Mountain Baby” which was released as third single sees the participation of Cecile Believe. What did you learn from this experience and which role Cecile played on this song?

Basically, when I’ve composed “Mountain Baby”, this one had just an instrumental chorus. For a long time, I completely fine with that. I mean I thought that it would one of those weird song with an instrumental chorus à la Skrillex. Then, I got in contact with a bunch of different people who suggested that having a chorus was the right thing to do.

Maybe, it would turned out elevating but the issue is that I wasn’t able to come up with anything good. So, I sent this song to my friend Cecile Believe who is an amazing producer and songwriter and after a couple of hours, she sent it a few hours back with a chorus. I felt like she nailed it! Finally, this song has a chorus and what she wrote, it’s so nice that when I’ve listened to it from the first time, I was really excited about it.

I imagine this COVID 19 situation has impacted you a lot in terms of being unable to promote and playing live your new material. What 2021 will look like for you? And what about the rest of this year?

I mean, I have absolutely no idea. I don’t think everybody know [laughs]. We just playing as it goes, really. I have literally no idea what will look line in 1 or 2 months. For sure, what I’m aware about is that I won’t be on tour for at least one year. The other incognita is that we don’t know how much able we’ll to travel, if are able to leave the city and if we are going to be in lockdown once again.

Am I gonna be able to work? Am I gonna able to work with people? Am I gonna run out of money? I have absolutely no idea and I think that everybody is in the same position which why it’s such a stressful time. So, I haven’t really an answer for that question, sorry. I guess, that is my reply [laughs].

So, Katie, we’re almost at the end of our interview. Please be free to say hi to your fans and our readers.

Thank you so much for this interview!