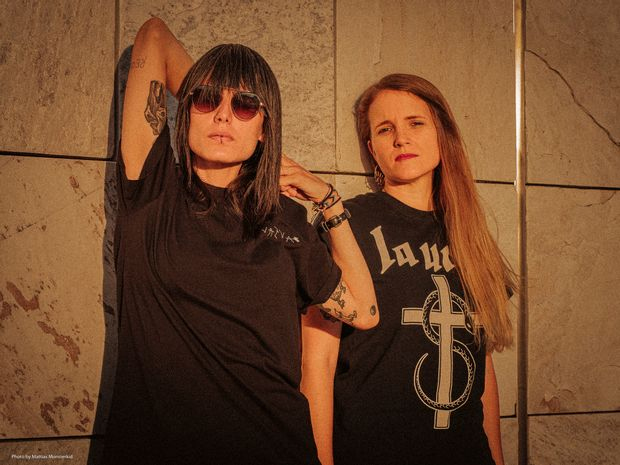 After the successful signing with German multinational label Century Media, Galician duo BALA is ready to unveil its explosive blend of punk attitude and stoner rock/metal musical elements. In this interview, the drummer and singer Violeta Mosqueira takes some to time to introduce how the band started and how this duo came across Century Media. Enjoy!

Hi Violeta, welcome to Femme Metal Webzine. How are you? And, how is this precarious period treating you?

Thank you so much. I’m so glad to be here with you. I love the concept of your publication because I love females and metal.

So, it couldn’t be better. Of course, it’s a complicated situation for everybody. Tho’, I’m working my ass off even if we cannot play. It sucks that we cannot have fun on stage. It is what it is. Actually, I’m just counting the days for this to end [laughs].

May 14th marks the release of BALA’s third album “Maleza”. But when did BALA start to move the first steps in this musical world?

I think we started like 6 years ago. Actually, me and Anxela knew already each other from other musical projects and bands. And, we love to attend concerts together.

Unfortunately, there aren’t many girls here in Galicia and the musical scene is so small that we know each other. In one occasion, me and Anxela were playing with our older bands in the same venue. We liked and enjoyed a lot to the point that we decided in future to try to collaborate together. Indeed, everything started there.

As I mentioned before, “Maleza” will be released on May 14th. What can you share about its general production? And, when did you start to collect the first ideas for it?

With our previous album “Lume”, we have toured so fucking much because we love live shows and the road. Since our beginning, we played a lot. In the sense that everywhere they called us to perform, we went there. In that way, we are a bit crazy. But, with “Lume”, things evolved because we started performing abroad a lot too. Actually, it was a dream coming true.

It is super-fun and super-crazy but at some point, we needed to stop a little bit because we spent 2 years touring non-stop. All this includes also trying to schedule between our daily day-job from Monday until Friday and driving a lot of kilometers. For instance, this means that driving for 300/400 km, arriving back at Sunday at 4 am and then, Monday working.

Once again, it was super-fun but tiring. In the meantime, a lot of things were happening to us and we didn’t have the time to process everything. So, at the end of 2018, we took a break from touring. Then, we started writing more songs which it followed also in 2019. Well, 2020 was supposed to be our comeback on stages with our new full-length.

And, alas, COVID came. In the end, we have been working on this album from the end of 2018, we have finalized our recording process in November 2019. It was recorded in 5 days in the same studios where we have recorded “Lume”, the Ultramarinos Studios in Catalunya. In fact, by early 2020, “Maleza” was already mixed and mastered. Due to the ongoing situation, we had to wait until now.

You have just told me that “Maleza” was recorded, mixed and mastered in the same recording facility of “Lume”. But I have recently read that it features a complete new approach for the band. How? What has changed from the last?

In truth, to begin with our début “Human Flesh” was a complete experiment because at the time were playing together for just 3 months together. In essence, everything was an experiment because we still didn’t have any clear idea of what should be our trademark sound.

While, for our second album “Lume”, our path was a little bit more focused and clear. Instead, for “Maleza”, I think we have found our musical path and what we want to do. So, it makes “Maleza” our strongest release to date because it’s exactly how we want to sound. Of course, we still like to try new things and about this, in our upcoming full-length, we have featured harmonized vocals for the first time.

Also, we have enriched our sound with more layers. For example, Anxela this time played with different set of amps. One for the bass and the other one for the guitar. As I mentioned before, we have used the same facilities and the same sound engineer present on “Lume”.

Actually, he did already know what to expect from us but our intent was to bring it further for improve our sound and challenge ourselves. If compared to “Lume”, we have more knowledge and this helped us to be more focused and more aware of what we wanted for “Maleza”.

Even though “Maleza” is BALA’s third album, it marks the collaboration with Century Media. How was the first approach with the band? And, how is the label treating you so far? Also, personally speaking, considering Century Media’s roster, I was really surprised by this choice.

Don’t get me wrong, I’m really happy that BALA signed with CM but in a first moment, when I’ve read the press release, I was taken aback by it. What really surprised me is the fact that BALA’s music is only metal but a mix of different genres.

Actually, we almost reacted like you when Century Media proposed the deal. Well, the previous full-lengths were released through a little Spanish label based in Santiago De Compostela called Madapadre. From the beginning, from betting on us, they helped us a  lot. Since our collaboration with them, what our partnership was honest with them and we are super-grateful.

Though, when everything was set in motion, so, to get bigger and serious and I refer to the international tours, Madapadre couldn’t grow more with us. And, they were the first to admit it. And, advice us from the next album to find an office and an international-based label. Naturally, it turned out to be challenging because we changed our office and started our working relationship with Holy Cuervo for management.

Actually, our intent with the signing to Holy Cuervo was to have a continuation from Madapadre. And, have something that can offer us the right tools to work internationally. After all, we have received a few offers including Century Media’s one. However, try to imagine our surprise. You know, they are a big label.

And, the first thing I did when that happened, is checking their webpage and their roster. Even if, we thought that we didn’t fit there, we matched on several things. For example, like they’re specialized in metal and we were already in contact some of the bands in their roster. For us, it’s something quite important because we want to be sure to make the right decision.

You know, having the confirmation from other friends that it’s worth collaborating with CM, it’s something that stimulated us. Though, there was just one problem: the initial conversation with CM happened at the early stages of our recording process. And, suddenly the pandemic came, which halted all the plans.

We felt at loss because we were afraid to lose this important opportunity. Luckily, when the situation was much clearer, they re-contacted us. We are still super-happy, super-surprised. So far, I think we took the right decision.

From “Maleza”, until now, there are 4 singles released: “Agitar”, “Hoy No”, “X” and “Mi Orden”. In your opinion, how can these singles represent the album?

I don’t know. In truth, this time, we have followed the advise of our A&R and PR. For us, everything is new and we trust them. Indeed, as a next single, they suggested one of our songs in Galician. Well, imagine our reaction. We’re completely incredulous [laughs]. But, they know better and we have complete trust in them. Instead, for what concerns the released singles, “Agitar” was there to serve its purpose.

Also, that song features some blast collaboration with Nashville Pussy’s Bonnie Buitrago and Najwa Nimri. Actually, the lyric of this song is taken from Lúa Mosquetera of which we fucking love him. In the end, we couldn’t started better. Actually, we think that “Agitar” makes a good introductory single because not everyone might like our super-noisy and super-aggressive.

But, this one features spoken words and this feature can attract many potential listeners. For sure, there will be more singles coming up. However, one thing is for sure about these single: they show a lot of different musical aspects of BALA. Also, I recognize the fact that two years ago, BALA would just chosen the aggressive ones. And, what we have chosen for promote “Maleza”, it introduces BALA through different facets.

What does the future hold for BALA?

Unfortunately, we have really little at moment. Due to this pandemic, we have to cancel our current plans. But, we will start to present “Maleza”, with a few gigs in Portugal. Actually, we really taking it slowly because things are just slowly move ahead.

Right now, the few concert that are getting planned are just socially distanced and seated ones. Indeed, it’s not the perfect setting for us and we don’t see ourselves in that type of environment. So, our high hopes are for 2022. We cross our fingers that everything will improve soon.

Well, Violeta, this was my last question. I really hope you have enjoyed my interview. As our tradition wants, this is the artist’s space where you can deliver your greetings to your fans and our readers. Thank you so much.

So, thank you so much Femme Metal Webzine for your time, attention and for being so supportive. We hope that the situation will improve soon.

We cannot wait to come in The Netherlands and everywhere all around the world for spread our work and our noise. And, more importantly, make bleed your years a lot. Thank you so much again and I hope to see you soon.