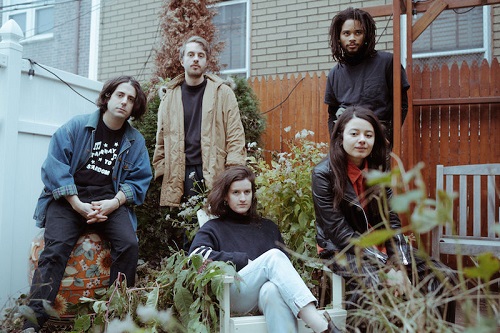 Mainly started a solo project, lately, Barrie has become a multi-national band with including members from all over the world. Their highly praised début album “Happy to Be Here” whose release was back in May via Winspear offers a clear view of what this promising dream-pop band is headed to. Let’s learn more about it by reading together this interview.

Hi Barrie, welcome to Femme Metal Webzine. How are you and how life is treating you?

I’m feeling good and life has been good, I’m lucky 🙂

Let me just start from the beginning: when did you realize that music was supposed to take such a massive part in your life? And by which artist and/or bands you got influenced during your career?

I started taking piano lessons as a little kid and that’s when I started making up songs, just little piano instrumental things. I was never incredible at the piano and I messed up a lot, and often when I messed up, I liked how it sounded and I would play around with it.

Also, when did Barrie get together?

The group that made the album together got together in the late winter/spring of 2017.

Back in May, your début album “Happy to Be Here” was released. Would you mind telling us more about its creative process? When did you start to collect the first ideas for it?

It’s the first album I have ever put out, so it has songs I wrote from way back – they were literally things I didn’t necessarily know were going to be on an album someday.

“Happy to Be Here” appears to be an important title. What meaning does that title hold for you?

Spurge came up with it – it was something we felt and feel a lot living in New York. A sense of gratitude for getting to experience the things we do.

Also, your first full-length was released by Winspear. How did you meet them and what has it been like working with them?

I cold emailed them 6 months or so after the band got together to ask if we could open for one of their bands. They’re the best. They’re so good at what they do and they’re such good people.

I was sincerely curious by this unique sentence stated in the press release, especially in its last part: “Happy to Be Here” is a softly explosive document of Barrie‘s vision for “a well-crafted pop song that’s a little bit fucked up.” Would you mind to explain a little bit?

I love pop music and pop songwriting, we all do, but we love the little production things that make it feel human and special. We didn’t want it to be generic pop, we wanted it to be more thoughtful and interesting.

At the beginning of August, you shared two alternative or better acoustic versions of the following songs: “Clovers” and “Chinatown”. Why did you feel moved to make new versions?

My goal with songwriting is that all the songs can hold their own without the extra polish and ornamentation of production. I like messing around with songs on guitar and piano to see if they hold up. Or in any instrumentation.

And why did you specifically choose these tracks?

We did a lot of vocal rehearsals with singing at a piano, and so I knew that the chords in “Chinatown” were pretty on an acoustic instrument, and I had this Rhodes I wanted to try it out on. Instead about “Clovers” felt like it would lend itself to a lot of different kinds of instrumentation.

You’ll be touring Europe later this year supporting Nilüfer Yanya and Charly Bliss. What are you looking forward to most about these dates?

I’m looking forward to seeing them play! You learn so much from touring with other artists.

Thank you again for taking the time to reply to my questions.