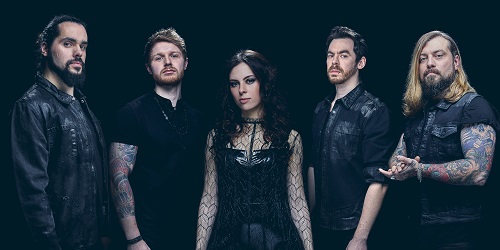 Germany’s symphonic metal powerhouse is back with their fourth album “Hørizøns” via Napalm Records. As you will discover throughout this interesting interview with the singer Jennifer Haben, this album is marked by a brand new approach in the composition of both music and lyrics. In a way, we can affirm that “Hørizøns” represents Beyond the Black in this current moment, which affirms the maturity of this band and a magnificent state of grace. Enjoy!

Hi Jennifer, welcome back to Femme Metal Webzine. How are you and how life is treating you in these precarious times?

Despite all, I’m fine. If compared to the whole situation, as a musician, I’m completely aware that it’s quite normal that I have periods in which I don’t earn money and vice versa. So, this is something we already have been taken care of by saving money for the times when we aren’t working. Knowing this, it does make me feel more comfortable about facing even a postponement of a tour. Even if we won’t perform this summer, we have some other possibilities such as performing in a live streaming on social media. Given that, there are a lot of bands that are struggling but I’m lucky to say that we aren’t not dealing with any major issues.

On June 19th, the fourth album “Hørizøns” was released via Napalm Records. What can you recall about its general productions and when did you start to collect some ideas for it?

I think we started writing ideas and songs during the summer of the last year. We have experimented a lot and for the first time, we had a lot of band sessions together that we couldn’t do in the previous albums because we didn’t have too much time on our hands. Instead this time, we had 6 months to focus on the whole process. Then, at the beginning of this year, we offered a glimpse of our most important songs to the label. They were really enthusiastic about it and motivated to professionally record everything for this release. So, between January and the end of March, we concentrated on the recording process only. I remember that the last vocal recording that I did was in mid-March, so, before all of this coronavirus’s situation.

If I recall correctly, as an introductory single, it was chosen as the song “Golden Pariahs”. What can you share about this song and lyrics?

First of all, what I can absolutely affirm is that it’s something different than we have done before because we introduced some speaking parts in the song. If we refer to the lyrics, it speaks about an outcast and what I wanted to express and import concept in this song which is that people have not to be alone with their thoughts. Remember that there’s always somebody that is experiencing the same thoughts on some issue and we can stand together on this.

You stated the following words in the press release about “Hørizøns”: ” “Hørizøns” is unmistakably a BTB album but with so many facets and personality adding up to the BTB ID that make it a true band album”. To what do you refer about when you mention “new facets” and “a true band-album”?

Actually, what I meant with those is simply that few changes have happened. We have introduced a new type of sound which is less symphonic and a bit more electronic. We really weren’t scared about it and an example can be the song “Misery” which also includes a super-poppy verse. We have just written like that because our intention was to break free from every chain that we seem to have in our mind when we write our songs. You have to open your mind and ask yourself whether the fans would like that even if you add your personal imprint. However, this time for us was really important to try something new. Of course,we were worried about the fact if the fans would like this. Also, this is strictly related to the reason why,this time we were capable of showing more facets of ourselves. In effect, “Misery” was one of the first songs that we ever produced for this album. After writing that song, we had a different opinion on our music.

Instead, if I take as a reference your previous album “Heart of a Hurricane”, how the band has musically improved and how that album helped to improve the general band mood?

I think there were many events that inspired us during the last year. So, we went on tour with Within Temptation, I participated in a German TV Show called “Sing Meinen Song’‘. If you put all this together, it has personally changed me and the boys and of course, this reflected in our musical development that I mentioned before in the previous question. This time, our intent was adding to your usual sound what we actually were listening to, which turned out to be electronic and atmospheric elements. In reality, I don’t know if this deliberate choice will bring us to a further step but it would be amazing if people would also appreciate that kind of music. We have just to wait for it and I can say already that we are really really proud of our album, hopefully it will be the same for our fans too.

Recently, it was released the third single out of “Hørizøns” called “Wounded Healer” which also features the participation of Amaranthe‘s Elize Ryd. How was this collaboration born and what memories do you cherish the most about it?

Generally, the funniest thing about “Wounded Healer” was working with Elize [laughs] because I think she’s super-funny, nice, a bit chaotic and I mean it in a good way [laughs]. So, she’s amazing and I really love her voice and super-satisfied about the result even if we recorded after a tour and after she was sick too. She sent her vocal lives 3 days before we planned to conclude our recordings. Of course, the timing was really super-tight but we managed to have her on our full-length and it was amazing having her on that track. The idea for this feature stems for your previous meeting during our short Finnish tour together with Amaranthe. We had already in mind the project for a co-headlined tour because it would perfectly fit. As Beyond the Black, we always want to know the people before we plan a tour together due to the fact that we share the same ideas and understand each other. Personally, I didn’t know Amaranthe before but after meeting them we realized that they were the right tour companions for our next adventure and coincidentally, our album releases helped us too. Once again, I love her voice. I listen to Amaranthe when I do some sport and lastly, I would enjoy playing live with Elize.

Additionally, “Hørizøns” sees the participation of the American cellist Tina Guo. Considering also that she’s more a classical-trained musician than a rock one, what do you think that Tina has added to Beyond the Black‘s sound? How did you manage to get in contact with her and how was this experience with her?

First of all, we met Tina at Wacken during our show last year. She was there for playing with some other band. However, while talking with her, I discovered that she’s really sweet and I admire her discipline. She inspired me a lot and I’m fascinated by how she plays the cello because truth be told she can play everything on that instrument. Actually, when I wrote “I Won’t Surrender”, I was already aware of the fact that song was something special and quite emotional. So, I needed that extra feature to make it even much more interesting which resulted in this collaboration with Tina where she added her magical and atmospheric touch.

Well, Jennifer, I know that this year is quite strange and particular but what 2020 had in store for you guys and how are you coping with this situation?

Despite everything, in this period we can do a lot for this release and I just hope we can tour at the end of the year but we are not sure, of course. However, we have set up a plan B for next year because we want to make sure to play every single scheduled show even if we have to postpone everything and avoid cancellations.

So, Jennifer, we’re almost at the end and with this please be free to say hi to your fans and our readers. Thank you so much for this interview.

Thank you so much for who is reading my words. Also, thank you so much for your interest and I hope we meet each other very soon and that we can party together again. It’s really important for all of us that we overcome all of this together. Stay positive at home, I know it’s difficult but I hope our album can help you in this. Always remember that we are not alone!