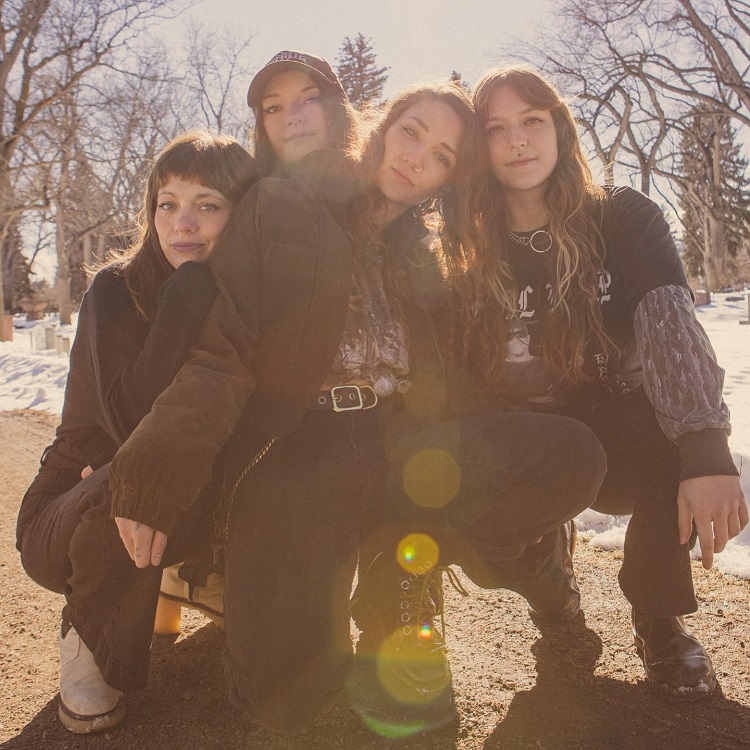 As already known, the pandemic has indiscriminately hit the world population. But, if there’s one category that was particularly impacted by this sudden event was the entertainment sector.

The doom psych-rock quartet had previously planned an EU tour which it was unfortunately canceled. Indeed, this interview was supposed to be collected during their stop in the Netherlands in support of their last LP “Silence/Motion” (out via RidingEasy Records). Luckily, the singer/guitarist Sunny was available for a short chat. Enjoy!

Hi Sunny, welcome to Femme Metal Webzine. How are you? And how these strange times are treating you?

Thanks for having me! Actually, I’m doing well, we recently got off the road from tour so it’s nice to have some time to rest. Times have been hard for sure but we are trying to make the best of it as best we know how!

In October 2021, the third album “Silence/Motion” was released by RidingEasy Records. What can you recall about its general production?

Creating “Silence/Motion” was a wonderful experience. For this album we worked with our friend Dylan White who was our engineer and our other friend A.L.N of Mizmor who was helping us produce the album. Indeed, it was a great team and we learned a lot from each other during the whole process.

“Silence/Motion” embodies as the title, two different types of emotions at the same time.  What personally means for you this album?

This was a very personal album. With this, we wanted to be as honest as possible so for that reason this album means the world to us. It represents a lot of grief, loss, loneliness and depression as many of us have faced over the last two years.

Back in 2019, we made “Veils of Winter” in the winter time right before the band really started touring and hitting the road a lot. That album is definitely a stamp in time. At that point we were really getting curious about where we could take our writing and trying to explore all that we could create. I think that comes out in the album!

Throughout “Silence/Motion” the band experienced a line-up Change. Then,how that impacted on the overall outcome?

We started writing “Silence/Motion” after our lineup changes so it actually didn’t have much impact on the album outside of creating with 4 rather than 5 of us.

For the first time, A.L.N. (of Mizmor, Hell) was involved as a producer. Why did you opt for this solution? Why did feel the need of an external person? And how it was working with him?

As mentioned before, we had brought him in to help us produce the album, which ended up being really fun! We wanted to get someone outside of the band to provide some insight on what we were doing and it ended up being really helpful to have someone’s opinion that wasn’t a part of the actual writing process and could help bring out the sounds we had intended on each song.

Recently you have announced a Summer 2022 headline show. Which are your expectations? And what the fans should expect?

We are doing a full headlining tour this summer in the US! We will perform “Silence/Motion” in full and a few old ones too.

I hope you enjoyed this interview. It’s your space now, please be free to say hi to your fans and listeners.

Well, thank you so much for having me! And thank you all for being a part.