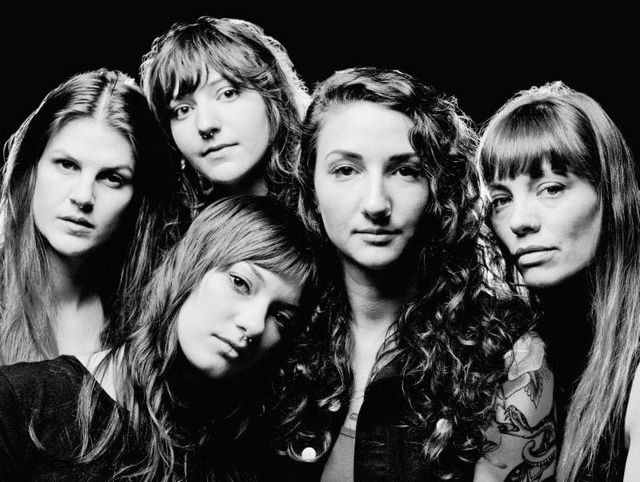 Portland’s Blackwater Holylight is literally making a name for themselves. With their seducing mix of heavy psych riffs, gothic drama, folk-rock vibes, garage-sludge, and soaring melodies colliding together, the band is back with a new line up and their second album “Veils of Winter” via RidingEasy Records. In order to know more, we have enquired about the singer Sunny Faris, enjoy!

First of all, for who’s not familiar with Blackwater Holylight, would you mind to introduce a little bit of the band and how you got together?

Blackwater Holylight is Sunny Faris, Laura Hopkins, Mikayla Mayhew, Sarah Mckenna, and Eliese Dorsay. We formed in 2016 but the current lineup formed January 2019. In the beginning, we just got together as friends that wanted to play music together and evolved into what we are today!

On 11th October 2019, Blackwater Holylight will release their second full-length titled “Veils of Winter”, what you can share about its overall production?

We recorded the record at Red Lantern in Portland, Oregon. This album is a true collaboration between members and was produced by us and our engineer Dylan White. It took about 12 days to record and we did a considerable amount of writing in the studio as well!

Considering that your debut self titled album was published solely 1 year ago, how did you manage to collect so fast this new material and what kind of difference can you denote between the debut and the upcoming album?

I guess we just had a collection of riffs and ideas that had formed while the first album was still in its release cycle. All the material on the new record had been sitting at ideas for a while so when it came time to actually write and record we had a loss of ideas to pull from. The new album is a bit heavier than the first and just more dense in general. The band has grown since the first album and I think that really comes out on the new album.

The first single is taken from “Veils of Winter” is “Motorcycle” which was introduced back in August. Do you have any particular insights to share about this specific song?

We chose “Motorcycle” as our single for the record because we feel as though it encompasses the overall vibe of the record nicely. It’s heavy yet melodic with a few different parts that create and sonically interesting and explorative song It was also one of the first songs had written for the album.

This upcoming album features the new guitarist Mikayla Mayhew. How this collaboration born and how she was involved in Blacklight Holylight?

Mikayla joined the band back in June 2018. We had always known that we wanted a 2nd guitarist and once we met her knew she would be perfect in the band. We also have a new drummer Eliese Dorsay who joined in January 2019.

You commented “Veils of Winter” with this statement in the press release: “One of our favorite things about this album is that because it was so collabora­tive, we didn’t comp­artmentalize ourselv­es into one vibe”. So, do you perceive that this album is much more musically varied?

I think so yes, we dip into some tones and writing techniques that didn’t happen on the first album, there’s definitely a lot going on it.

Blacklight Holylight is currently on tour with Monolord and Thou. So far, what did you learn from this experience and what are your next expectations about it?

I am writing this interview in Florida on tour with Thou. Tour is always different with every band and place and everything comes with lessons, much too vast to write down in any kind of order. But I think touring is all about playing your best and working as a team to take care of each other and have fun! Monolord is happening in November.

Instead, if we focus on future plans, what Blacklight Holylight have in mind for the next year? Perhaps, is it in your plan a tour in Europe?

Right now all we have planned is a west coast tour in March, and hoping to get back to Europe after that!

So, Sunny, we’re almost at the end and with this please be free to say hi to your fans and our readers. Thank you so much for this interview.

Thanks so much for taking the time and interest in the band, we appreciate you!