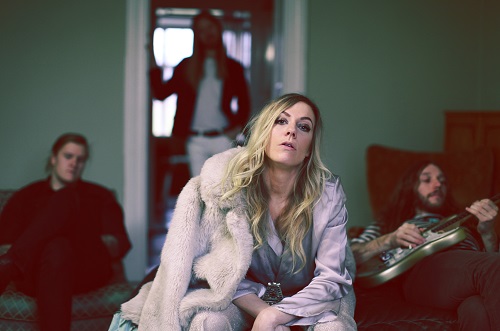 Sweden’s Blues Pills new releases are always an event. And every event that respects, it comes with expectation and trepidation. So, in midst of all this upcoming release, I took some time to plan a nice chat with Elin Larsson, the singer and the mastermind behind the trio.

As previously indicated, the mentioned event is their upcoming album “Holy Moly!” that it will be released via Germany’s Nuclear Blast on 21st August 2020. Even if 2020 will be always remembered as the infamous year for the music business, “Holy Moly!” for the Swedish band represents a breath of fresh air. Discover with us more about and enjoy!

Hi Elin, welcome back to Femme Metal Webzine. How are you and how these precarious times are treating you?

Thanks. I’m doing fine. I mean, by now, I was supposed to be on tour instead I’m at home and I’m turning into a proper chef during these Corona times [laughs]. Basically, it’s what I’m up to in this period. I’m also wring some new music and reading books.

For what I remember the last time we spoke together was back in 2014 during the promo of the debut album. So, our last chat dates back to 7 years ago. However, this bring us to mention that on the 21st August, it will be released your third album “Holy Moly!”. What would you like to share about its general production and when did you start to collect the first ideas?

[laughs] Wow, that’s a long time ago, indeed. For what concern “Holy Moly!”, I have to say that in 2018 we took a break with the band while at the same time our guitarist started to work on his solo project. After this break, in 2019 we started to work on our demos. This album was recorded in our newly built studio which is situated in the outskirts of Orebrö and it used to be an old factory. At the time, it was involved in the recordings, just me, Zacky and André. Eventually, after arranging every song, we chose the ones that would be part of this new release. Then, we dedicated ourselves to properly re-record them in way you can listen to now.

It has been a really calm process because it’s really relaxing to have our own studio. Additionally in this new upcoming album, we had a shift of role: if before Zack was playing the bass, now he plays just the guitars. Even though, during the recordings, he took care of both guitars, bass and the studio too. So, we worked his ass off for this album [laughs]. For us, it has been a boost of confidence to being aware of the fact that we both recorded and produced overselves. Having doing that, we have experience a complete sense of freedom that we missed since the whole success with Blues Pills.

You have just mentioned that Holy Moly was produced by the band itself. So, which is the lesson that have you learned by doing that? And, how this experience improved you as an artist?

For sure that I should trust my guts and I shouldn’t be scared to say what I actually think. You know, I can do this. We can do it ourselves. One of the main point, since Dorian quit the band, we have learned not to depend on other people.

We don’t want to depend on people that don’t want to be involved as we are like it did happened with this guitarist who played with us and then disappeared. In truth, it’s what we have realized. So, we were able to do this ourselves freely.

I’ve also learned that “Holy Moly!” was mixed by the Grammy award winning Andrew Scheps. How was collaborating with him and which was the different approach that he used on your music?

It was so good collaborating with him because, since the beginning, he instantly understood what we were aiming for. On a first instance, we sent him our rough mixes straight from the recordings. After, he listened to the material and created the right frequencies that helped our songs to shine. For what I remember, it happened that only one song we asked him to adjust the volume of the vocals but the rest, he just nailed it.

He completely comprehended what we see striving for. We’re super happy with the result and when we listened to the final version, we were completely mind-blowed by it. At the same time, we were surprised too due to the fact that this record is self-recorded and I never thought that a guy like Andrew Scheps would be interested to mix something like that.

Also, “Holy Moly!” introduces the new bass player Kristoffer Sehander in the band ranks. How he generally impacted in Blues Pills and in which way, Kristoffer has contributed to this new record?

Well, Kristoffer isn’t on the records [laughs]. On it, we are just me, Zacky and André and Zacky has played the bass too. However, what I can say about our new bass player Kristoffer, is that he’s super good with his instrument and he sounds way heavier and rock’n’roll.

Basically, it’s like a fist in your face. I know this for sure because, before the Corona pandemic hit Sweden, we had the chance to play a gig with him and to rehearse a little bit.

You know, I was wondering… The last album that Blues Pills has released was in 2016 with “Lady in Gold” and at the time, it still featured Dorian Sorriaux. What happened throughout this lapse of time?

Yeah [laughs], but we have toured “Lady in Gold” until 2018 and I remember that the last show was Woodstock in Poland. Of course, then we took a break and he departed the band. Lyrically speaking, it didn’t change much since he never contributed or wrote song for the band. I mean, it has been always me and Zack who wrote the songs and we are also the founder of the band since 2012.

Back then, he had any part in that either. Definitely, what I’ll miss about Dorian is the fact that he’s a fantastic live guitarist due to his live improvisations. Though, he sounded like he didn’t have anymore the drive for stay in the band. At the end, he wanted to play his solo stuff. Nonetheless, I don’t feel like comparing nobody because Zack and Dorian are good on different levels and ways…

They have also two different personalities, so it’s almost impossible to compare them…

Yes, exactly but I really like how it sounds now because of his rawness and rock’n’roll attitude. Being a songwriter, he also has the skills to perceive what a song needs. At the same time, I miss as a bass player too but it’s impossible to perform in both roles.

The album cover, which originally is an illustration, was created by Daria Hlazatova. How precisely the cover album connects with the songs presented inside?

For me, the cover artwork represents a woman and a widow embracing a demon, a devil or a beast. It sums so the whole album because the album deal with our biography as a band. It feels like you have to make peace with your own demons.

As I mentioned before, the previous Blues Pills‘s record was released back in 2015 but if we compare this one to “Holy Moly!”, which are the main peculiarities between these two albums?

Personally, “Holy Moly!” has more live feeling and it’s much more rock’n’roll. While, “Lady in Gold” was maybe niche, nerdy and with a bit more of psychedelic soul.

Ultimately, “Holy Moly!” might represent a hybrid between our debut and our second album. I think, “Holy Moly” has the rawness from our debut and the songwriting qualities of “Lady in Gold”.

Out of “Holy Moly!”, there were released two singles which are “Proud Woman” and “Low Road”. What would you like to share about these two songs and their videos?

I mean, “Proud Woman” is a power anthem dedicated to all the women and to whoever identifies as woman. It’s a song for empowering me and all the woman out there: just to say “Fuck it and do what the fuck you want” [laughs]. While “Low Road” is about try to not run away from your problems.

For example, numbing the pain instead to face your depression and anxiety will never work because you don’t solve any issues. Of course, they’ll catch up with you. Surely, a lot of people can relate with that I’ve previously described. Also, “Low Road” is one of my favorite tracks because it’s one of the heaviest.

So Elin, I know that 2020 is a bit scary about touring and I’m neither trying to approach that topic. Since we are at the last question, be free to say hi to your fans and our readers and at the same time, I’m thanking you for you time.