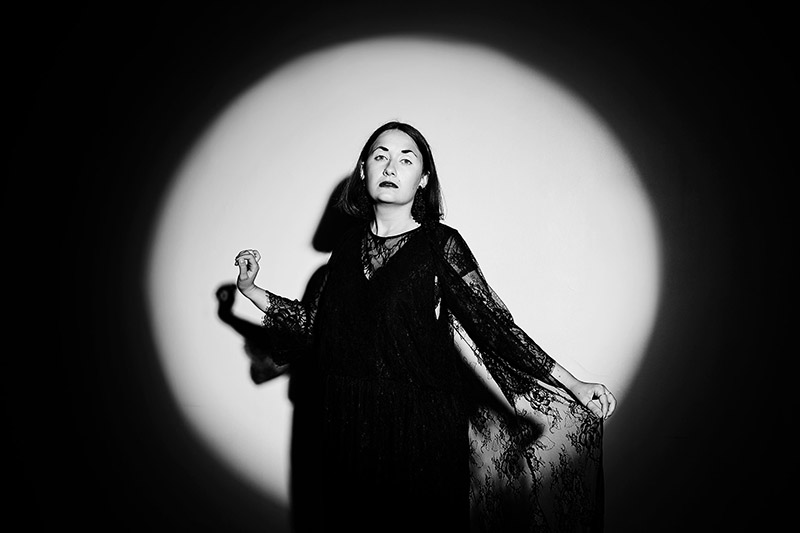 I’m personally fascinated with Bonander because her singles are so essential and at the same time they are so enrichened by a full texture of details that to a macroscope view might look unrefined. But if you take a closer look, you will see a defined structure which are comprehensive of classical music, experimental, electro sounds and most importantly, historical characters imbued with feminism and strongness.

Hi Ellinor, welcome to Femme Metal Webzine. How are you and how life is treating you?

Thank you. Actually, I’m quite fine. Everything is crazy due to the coronavirus but I’m working from home with my music, so I’m pretty lucky right now. Even though these weeks I have been intense, I’ve been able to cope. considering the circumstances, I’m quite well

For the readers that are not quite familiar with you and your music, would you like to tell us how your musical journey started?

Yes, totally. I originally have a musical background from jazz but I felt I was much more interested in experimenting with synthesizers and weird electronic stuff. From there, I dedicated myself to study music production which developed my sense of composition that led me to create my own music and production. So, it was an urge to develop my music and not only learn it as a craft as before. It has been important to create my own voice and use it for singing and producing it. My music is kind of an experimental pop, rock, dramatic and dark. It also features some feminist lyrics with political meanings and this brings me to write when I’m angry. That’s why, it gets so dark and emotional.

Back in 2018, you have released your debut EP “It’s a Girl”. What you can share about its production and lyrical themes?

Well, “It’s a Girl” was a very big production because I had like 152 tracks for each song and it was a huge experimental workshop for me because I wanted to try everything. The songs came directly from my personal experiences that I lived through. I put a lot of heart and effort. If we refer to the title, its meaning deals with the fact that we are born with different expectations and how it does affect our lives. It does not apply only to the fact that I’m a woman but also because I’m a girl too. It also relates to the fact to the temptations that we have in life and how this affects our lives. It does simply show this, really. So, it was like an identical reflection that was processed while writing. I also worked with the drummer Elias Ortis who collaborated on the beats with me. I’m very happy about its outcome because it features the heaviest aspect of my music.

In 2019, you did come back with the single “Annie”, for what I get the single looks like it’s part of a much wider project, right? If you don’t mind say something about it?

Yes, actually the project is to release several singles on which it will follow, hopefully, in early 2021 a full-length album. At the moment, I’ll keep up releasing singles. Instead if we focus on “Annie”, to directly relates to Annie Oakley who was the first female sniper. After that, in January, I’ve released the second single called “Marta” and it’s about a female character that I read in a book. I’ve been working a lot on historical perspectives and maybe, I’ll release my next single at the end of May. The thing is this time I’ve been also introduced some acoustic elements as cello and clarinet to create a perfect mix with the synthesizers, so there’s like a friction between the instruments. It’s organic but yet synthetic and I like it a lot. Hopefully, an album will follow with a few of music videos too. And also, some dates to play.

So, you stated that “Annie” contains more vulnerability and resignation. How was it for you to explore these painful feelings?

Well, in “It’s a Girl ‘‘ I hid myself behind a large production with a lot of synths and voice while in “Annie”, I’m completely naked. It’s just me without not a lot of choirs and not like having 200.000 different tracks in my project. In the end, it’s very vulnerable and I think it was necessary for me because I had a dry spell before I started writing this song. Additionally, I think also the expectations of when people listened to the EP played a dirty trick on anybody who expected a super and massive production. If my EP was angry, this one sounds much more reflective and sad. It’s like an emotional curve because on “It’s a Girl”‘ I get all this stuff out of me then I have this dry spell and consequently some difficulty in writing. However, when I re-started writing once again a lot of naked production came up.

Though if we would like to analyse “Annie” from a lyrics point of view, what would you like to add about it? Do you think are much more historical or are more related with feelings?

Absolutely, it’s more historical but I find it quite easy to write emotional stuff too using the third person. It’s always easier to be vulnerable because you don’t sing from an ‘I’ prospective. Even though I sing about Annie and her life, she represents a parallel of the society we have now. Well, even if it’s historical, it’s really personal. Actually, in the lyrics I need Annie in a dream because I have dreamt of her. It’s just a fantasy meeting with this person and there’s also some friction because I’ve always been angry over social injustices and I’m a pacifist, I don’t believe in guns, weapons or violence. Considering all this, I thought that with Annie it might turn out investing because she was super-feminine: she created her dresses by herself, however, she possessed some real male attributes because she was still shooting a gun. This historical event represents quite an oxymoron due to the fact this character mixes a hint of violence and darkness while being at the same time a pretty girl. I found it quite interesting to explore since it’s a story that can be easily applied to your society.

Back on the 24th January, it was released as your second single “Marta”. What would you like to add about this other single?

If in a way, “Annie” introduced the vulnerable part and with “Marta” it just let it out. This single really opens to the vulnerability and the heart, so it’s an anthem for the people who want to keep fighting. Sometimes you feel so tired from fighting injustices that you want to give up. As said before, it’s an hymn for when you feel stuck and you’re not able to proceed any further, even if you attempt with any fibre of your being to continue towards your path. It’s really emotional for me and it’s about that fire that easily might disappear due to tiredness but you keep on going anyway. In this song, I practically imagined myself standing on a cliff, singing and screaming out and “Marta” is a character from a book that fights for peace among many men that want to go at war. She tries to promote this important idea and she additionally advocates as an alternative for war, diplomacy. Actually, this book was written by the first woman who received the first Nobel prize, so, it’s really an old book. “Marta” can be perceived as a metaphor for when you don’t have enough energies to fight and you feel hopelessness. Also, it can be perceived as a scream for passion when you try to cope with toughest times. Personally speaking, it’s the most vulnerable song that I ever released and everything I played during a gig, people started to cry and they became really emotional. Hopefully, when I sing to share with my audience some emotions and vulnerability too.

Besides this long term project to release standalone singles, what I’m wondering is if these singles will be collected in a physical release?

Yes, absolutely but in the meantime, I’m planning to release about 5 singles and then, everything it’ll be collected in a full-length later on. I have every intention to publish my album maybe late 2020 or early 2021. At this moment I cannot assure you that my next release will be even physical because so far, we haven’t been in a discussion with our label Icons Creating Evil Art but it’s something we’re taking into consideration.

What 2020 has in store for you in terms of touring and new material?

I’m releasing my next single at the end of May and it will follow some live sessions videos. Right now, I’m just sitting in the studio and I’m busy working on new music, I have a lot of songs that will be released. Hopefully, after May, there will be more singles. About the live concerts, at the moment, I don’t know right now. Due to the Corona Crisis, I don’t have anything planned and the ones I had were cancelled. So, I’ll deal with this situation day by day but I sincerely hope that when I’ll release my upcoming album, I’ll be able to tour in order to promote my new material. That’s my final goal, anyway.

So, Ellinor, we’re almost at the end of our interview. With this, please be free to say hi to your fans and our readers. Thank you so much for the interview.

So, thank you so much for allowing me to talk about my music. It’s always wonderful to be able to share your thoughts and feelings about your art, so, again, thank you so much for that. I feel really grateful that you want to write something about me and please keep listening to music even during this Corona time.