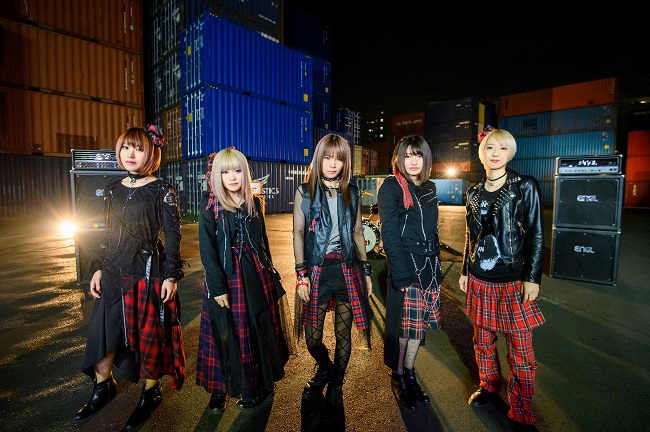 BRIDEAR – An Interview with KIMI and HARU

From Japan with love. As previously documented (which you can read it here), Japanese all-female power metal band BRIDEAR have recently toured in Europe.

And in this occasion, we have interviewed the lead singer KIMI and the bassist/vocalist HARU for learn more about their latest release “Bloody Bride” which it was released in oversee territories via Setsuzoku Records. Enjoy!

Welcome to Femme Metal Webzine, how’s the tour going? And how is treating you so far?

KIMI: The tour has been great! So many people have bought tickets and supported us! Tour staff, venues, and fans have all been amazing.

For our overseas fans, how BRIDEAR got together?

HARU: I met KIMI in 2011 when we were in other bands with a mix of male and female.

KIMI: Yes, we decided to start an all-female band together to show our strength and fulfil our own vision. In 2012, BRIDEAR was formed.

Recently, Bloody Bride” is out. When you started to collect the first ideas for the new music?

KIMI: We started writing after we performed in London in 2019 at Metal Matsuri.

HARU: We were very inspired by being in the home of heavy metal.

Also, “Bloody Bride” features in Europe with a different artwork and it marked the collaboration with Setsuzuku Records. How this partnership started?

KIMI: Indeed, we performed at Metal Matsuri in London in 2019. It was an amazing experience. The organizer was Orion Live. BRIDEAR developed a good friendship with Orion and when they began a new record label, Setsuzoku Records, we wanted to be a part of it and have an official overseas presence. So, BRIDEAR is now officially an international act.

Out of this new album, there are 2 singles: the self-titled album and the song “Daybreak”. What can you tell me about them?

HARU: “Bloody Bride” was directly inspired by our visit to the site of the old Marquee Club in London in 2019. That was where Iron Maiden and the New Wave of British Heavy Metal took off! We love those bands and we wanted a song that used the overseas visuals and topics like a castle or dungeon and a demon. I felt connected to the history of metal and it inspired me to write.

KIMI: “Daybreak” is a about a journey. It represents reaching for the light when you are in a dark place.

Before the album release, one of your best songs “Brave New World” features as a new version. Why did you opt for this? And which are the main differences with the original one?

KIMI: This is a very progressive song with a complicated composition and arrangement. It’s very challenging but rewarding. It is inspired by the anger we feel at the government response to the pandemic.

And the failure to recognize the importance of live music and our livelihoods. But we would not give up and we would tour again and continue forward. We would revisit a brave new world. We did just that!

So, HARU and KIMI , what are the next plans for BRIDEAR?

HARU: We look forward to completing this great tour and then we have a few dates in Japan in November.

Thank you for all of the support! Please check out our official English site, www.bridear.world, and follow us on social media. We will be back!