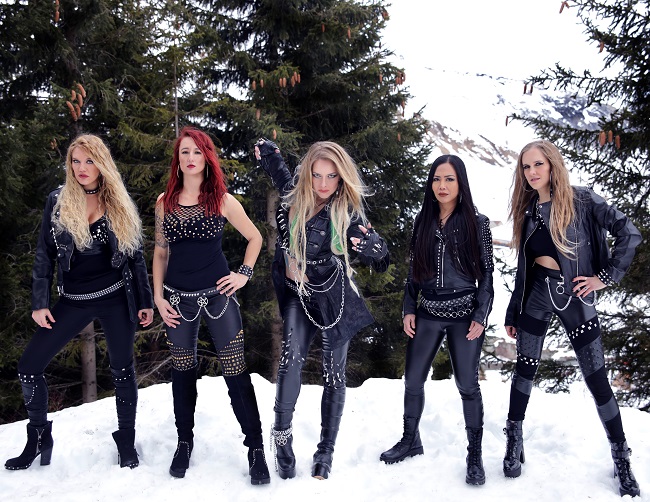 Swiss heavy metal witches Burning Witches are back with their brand new LP “The Witch of the North”. This fourth full-length shows a well-achieved musical maturity and introduces new musical elements. But without anticipating too much, in this interview with Burning Witches‘ singer, Laura Guldemond, we’ll learn everything in due time. Enjoy!

Hi Laura, welcome to Femme Metal Webzine and thank you for this interview. First of all, how are you? And, how are these complicated times treating you?

I’m fine, thank you. You know, slowly is getting better and better. So, everything is ok and it’s gradually getting back to normal. Indeed, I spent most of my time learning new things and beginning new endeavors such a new website and new YouTube videos. In the end, I kept myself busy. It was all right.

On May, 28th Burning Witches‘ 4th album “The Witch of the North” was released. What insights can you share about its production? And, how was to work in sync, from distance, on this LP?

Actually, for me, it wasn’t so much difference. Since I don’t live close to the girls, it has become quite a routine. It’s just a matter to write my material at home and then, share my demos with the rest of the band. And, then, when we have to record it, we just rehearse it.

Most of times, it’s how we work. In normal times, I would have some few gigs which would allow me to meet the girls and hit with them the rehearse room. Indeed, that helps us to understand how the songs might work out or not before the official session.

However, what is changed a couple of things related to COVID 19’s virus: the first one was related to the travel restrictions and the other one was that unfortunately, we had no gigs in between. Consequently, I couldn’t been together with the band. And then, see other people. At least, I was able to properly focus on writing and composing.

You have just introduced the writing process and about this, when did you start to collect your first ideas? Also, what about the lyrical theme?

Well, everything started with a riff that Romana sent me which sounded quite Norse-inspired. Indeed, the title album “The Witch of the North” was already there and from there, the girls had the idea to ask me to write some lyrics about it. But, nobody including me knew who the Witch of the North was and this led me to research about the subject.

As far I could find, there are two goddesses called Freyja and Frigg who have the capability to foresee the future. Actually, some people believe that are just one god. About that, I like the idea that Freyja would be the one. Besides that, she’s also the goddess of war and love. So, that would be a pretty awesome combination. In some ways, it’s how all the pieces come together and which result as a main lyrical theme, the Norse mythology.  Indeed, all this reflects even in the photoshoot.

About the photoshoot, where precisely was it shot?

Actually, that’s Switzerland during the winter. Since the whole band, excluding me, lives near Zürich, the location is just 1 hour away from the city. I always feel like I’m a tourist when I’m there because it’s not flat like my country, The Netherlands [laughs].

This time, the featured cover artwork was created by Argentian artist Claudio Bergamin. How was to collaborating with him? And, did the whole process work?

Firstly, we have explained to him the lyrical treated theme to him. Then, he simply used the fact that we are based in Switzerland and our photoshoot. Lastly, we really like the comic stories-style with which he reproduces his art. It feels to be part of a Marvel story which are larger-than-life characters.

We see ourselves as super-heroes and consequently, we love its epic vibe. In the end, he really understood what we wanted. Besides being deported as super-heroes, he understood how to portray a bit of the mystique of Frejya and Frogg.

For that element, he got inspiration for that, from the Ent(s), the living trees present in The Lord of the Rings. And then, he simply combined all these elements. Personally speaking, he did an awesome job by showing the mystique and power of Norse mythology.

I still remember when you joined Burning Witches back in 2019 and when you were introduced in the band with the EP “Wings of Steel”. At the time, how did you happen to join Burning Witches?

It’s a really good question. Related to the first part of the question, since the previous guitarist of Burning Witches was already an acquaintance of mine. And when they were looking for a new singer, she proposed it to me because I know that I would fit the band. You know, I have the voice, I love the old school metal and I was already having the same style. In the end, it felt like a natural match. Then, I have sent a couple of recordings and submitted them for my audition.

Actually, “The Witch of the North” is the second album on which you feature. While the first he was “Dance With the Devil”. In your opinion, which are the main differences that you can notice between these two LP? Also, how throughout these years, the band chemistry evolved?

Of course, we got to know each other more which makes it easier than of the beginning. And this was the same thing for the writing process because I don’t need to ask anybody. However, for the main differences for me, is that we have decided to focus on a theme. Naturally, this facilitates a lot because you know already when to point to your research. Though, if compared with “Dance With the Devil”, this one is more straightforward and with a rock’n’roll attitude.

So, this new album is much more cohesive than the previous one…

Yes, in terms of the lyrical themes but musically speaking, it still holds a lot of variety. Definitely, it has a winter-y and spook-y atmosphere. And, we even have an intro in the middle of the album right before “Night Worlds” starts. This time, we even have some storytelling which it surely helps and enrich our musical structure. And, in a way, it recalls one of my favorite songs ever which is Iron Maiden’s “Rime of the Ancient Mariner”.

Out of this incredible album, we have 3 amazing videos out. The first is “Flight of the Valkyries”, “We Stand as One” and “The Witch of the North”. What would you like to add about the videos?

You know, on these days the listeners are really used to watch a lot of visualizer before the actual video. And, we thought that “Flight of the Valkyries” was the right choice for introduce our new LP because it features the aforementioned elements. We liked also the fact that in the visualizer we have inserted images that reflect the general theme. So, images of Vikings and Valkyries.

While the second one was “The Witch of the North”. Actually, this one is an real video clip and for it, we went to Poland for the shooting session. For me, it was the first time to be involved in such with a professional crew of 10-15 members. It turned out to be an interesting experience with can both a learning curve and stressful at the same time.

In order to celebrate the release of the album, the opted for online release show. First of all, how was it? And, which is the feedback received so far?

Yeah, our fans loved it and all of us, too. In the end, we were pretty much satisfied because all the technological equipment worked without problems. Since the show was available for 3 hours only, we are thinking to released it as a DVD. So, that everyone can enjoy it and watch it.

Recently, it was announced the tour in support of “The Witch of the North” together with Primal Fear. What would be your expectations?

It will be awesome. It will be earth-shattering. You have to be there and you don’t have to miss it.

Unfortunately our interview is almost over, please be free to conclude it with your last words, as you feel. Thank you so much.

First of all, thank you so much for this interview. Thank to everyone that will read this interview. Just follow us online to discover when we’ll play in your country or city. Check out our last LP “The Witch of the North” and I hope you like it. Stay metal!