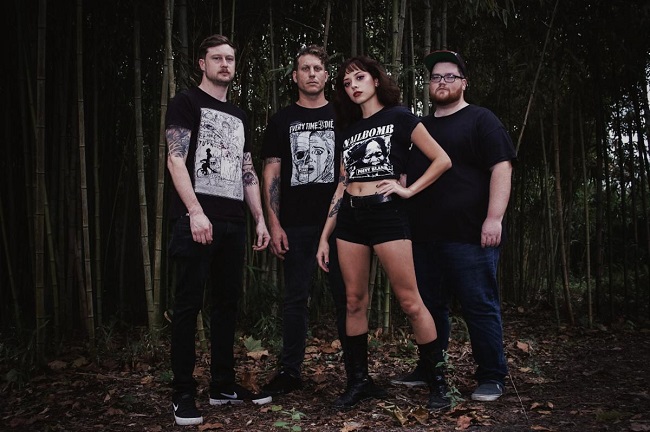 South Louisiana hardcore metal band CAPRA is ready to blast our ears with pure violence and attitude. In this interview, together with the singer Crow Lotus, we’ll discover more about this promising band and its debut album “In Transmission” recently released via Blacklight Media/Metal Blade. Enjoy!

Hi Lotus, welcome to Femme Metal Webzine, how are you? And, how are these days treating you?

Hi there, I’m doing well. Obviously, I would love to go and play some shows. On the other way around, I’m spending this time on writing and trying to fix some stuff that I wasn’t able to do before. I guess, you have to keep yourself busy.

For those who are not familiar with Capra, would you mind introducing us how did the band get together?

Sure. Originally, we come from South Louisiana. Basically, both our guitarist and drummer Tyler and Dan previously known each other from a long time.

Also, they have been playing together for a while. Then, we added our bass player in the line-up a few years ago. Subsequently, I was the last member to join the band around two years ago. Well, that’s where we are right now.

On April 23rd, CAPRA’s début album, “In Transmission”, was released. What can you share about its general production? When did you start to collect the first ideas for it?

Actually, most of the recordings happened in 2019. At the time, we just sat on it for over 1 year because we’re hoping to get signed by Metal Blade. You know, we didn’t want to release it on our own and we have just waited for seeing what would happen with the label. At last, we finally getting signed. And, this album was released. We’re waiting for so long and we have worked so hard for it. Indeed, “In Transmission” was been composed already 2 years ago and ultimately, we’re able to release it.

Which meaning does hold “In Transmission” for CAPRA?

You know, it’s funny because it holds several meanings for each of us in the band. Though, the general meaning is related to the fact we are transmitting our message for the first time. More precisely, with “In Transmission” is the first time that we are doing it with our public.

As we have mentioned before, Tyler and Dan previously knew each other from a long time. Then, I’ve learned that all CAPRA’s members have different experiences in several other bands. So, how have these previous experiences molded what CAPRA is now?

Well, that’s always a hard question for me because we all come from completely different backgrounds. First of all, I never been a vocalist. However, I was playing the bass for a long time. And, just for the sake of the fun, I sung one song in my old band. You know, we didn’t expect to record it at all. But, I guess, Tyler and Jeremy listened to it. Since then, they have always encouraged me because they liked how it sounds.

Subsequently, they asked me to audition for CAPRA and it ended up quite successful. From what I’m aware, Tyler and Jeremy have always played hardcore music while Ben’s background is coming from punk. Instead from what concerns me, my background relates more with metal. Even though, hardcore is new thing for me, I’ve been part of that scene.

Recently, the single “The Locust Preacher” was released. Regarding this, I wanted to ask more about its general concept. What are the lyrics about?

For “The Locust Preacher” is a song I wrote about myself as a child. Since I was a child, I have always got trouble sleeping because of nightmares and also, have sleep paralysis. In a way, the song is the description of what I was experiencing during those situations. As far as “The Locust Preacher”, it’s about that.

Instead, what about the other songs present on “In Transmission”?

Well, the other songs in the full-length are about all different things. To be more precise, I try to expand on different topics such as the relationship with my mother and mental health. Unfortunately, this in this critical period is affecting the US both economically and socially. Especially, for the social context, I attempt to talk how this affects people who are already struggling with it.

Considering the ongoing situation, Lotus, in the short and medium term, which are the next band’s plans?

Of course, in the near future, we’re hoping that the whole situation with COVID can improve. So, we should be able to tour again and playing much more shows because that’s what we really thrive in. However, in the mean time, what the only thing we really can do is keep writing more music. Also, we have more music videos that are in the and we just are working on those ones. Unfortunately, we cannot plan anything with what everything is going on.

So, Lotus, this was my last question. I hope you have enjoyed the interview. As per Femme Metal Webzine’s tradition, this is the artist’s space for be free to say hi to their fans and our readers.

Thank you for having me and to everybody who’s listening to us. Right now, it’s really important for women to have a voice in this scene. Even if, more and more women are getting involved in music, we are still a small minority. So, it’s really crucial that we stick together through this hard time.