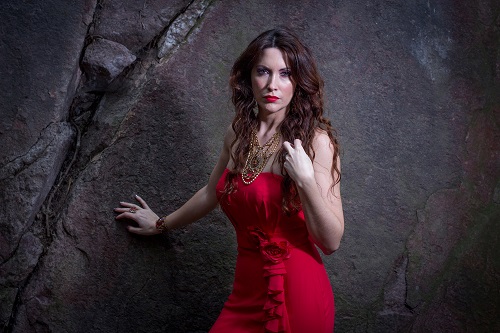 Currently on tour with Austrian symphonic masters Visions of Atlantis, behind the moniker Choas Magic is concealed the musical persona of Caterina Nix, experienced Chilean progressive metal singer-songwriter already active with the symphonic band Aghonya. If the self-titled debut marked her debut with former Stratovarius guitarist Timo Tolkki, Caterina in her second album “Furyborn”, released by Frontiers Music SRL, is ready to flying solo. Let’s discover more by reading together this nice interview.

Hi Caterina, welcome back to Femme Metal Webzine. First of all, how are you and how today’s is treating you?

Thank you! I’m very well, quite excited about what’s coming for us!

The last time that you talked together with Femme Metal Webzine was back in 2015 for your self-titled debut album who featured also former Stratovarius mastermind Timo Tolkki. In retrospect, how things have improved/changed since then?

Well, now I had the chance to create something of my own, it has been a wonderful opportunity to design a sound and a style and make something with my own personal seal. So it has been a refreshing experience, although I’m very thankful for the opportunity I had to work with Timo. We are still in touch and maybe we will be working again in the future. So there has been change! And the reviews and people’s reception has been overwhelming, I’m very happy about the results.

On June 14 th 2019, it was released via Frontiers Records srl, your second album “Furyborn”. Before anything else, considering that Timo Tolkki is not part anymore of the project, how this event influenced the general outcome out the album?

Well, we knew that we wanted to give our new music a different twist, so along with my counterparts in the songwriting department (Nasson and Franco Lama) we thought thoroughly about the sound and styles that we wanted to combine to make this album. Personally, I did not want to go as symphonic as the first Chaos Magic, so we went more eclectic, we mixed alternative, melodic, symphonic and classic metal elements with very deep electronic surroundings and different rhythms. I like catchy music, I wanted to do something that would catch people’s ears an attention.

Secondly, this time how did you approach the process of writing and composition from “Furyborn” and when the entire process started?

I almost always start humming and improvising melodies, then I start working on the rhythms and chords. Then, I get together with Nasson or Franco and we start giving the songs substance and a melodic surrounding. There are songs that I had had in my mind for years, waiting to come alive, and this was the perfect chance to do so. Plus, Nasson and Franco are amazing songwriters and they gave wonderful ideas and feedback.

“Furyborn” features some excellent duets on the following songs: the title track with Evergrey‘s Tom Englund, “Bravely Beautiful” with former Sirenia‘s singer Ailyn and last but not least, “Path of the Brave” together with Rainbow and CoreLeoni‘s singer Ronnie Romero. How did you manage to involve all these artists together and how do you specifically chosen the songs for each artist?

We had their voices in mind before even starting writing. In the case of Tom, we wrote “Furyborn” first, and then approached him, with the song ready for him. Nasson and I are big fans of Evergrey, and we wrote a song that would welcome his voice into it, and that would sound attractive for him. Thankfully, he liked it and agreed to participate! In the case of Ronnie, we are both Chileans, working for the same label and with similar experiences in the music business so we met and we hit it off, he’s a really sweet and nice guy with a voice of gold! So it came naturally to work together. As for Ailyn, she has such a warm, cozy voice, and she was perfect for “Bravely Beautiful”, cause we needed a voice people could feel emphatic to. She did an amazing job! Let’s not forget another guest: Mistheria, creator of the Vivaldi Metal Project and keyboard player for Bruce Dickinson. He participates in “Beware of Silent Waters”, one of my favorite songs of the album.

In addition, the album was mixed by Jacob Hansen. How was working with him?

It was such a pleasant experience! He’s such a pro, and very invested into making you sound the best possible. It was a delight keeping in touch with him through the process and I really hope we keep on working together in the future.

So, both “Furyborn”, “I’m Your Cancer” and “Like Never Before” were published as a singles and they feature, for each song, a video. First of all, how was working on those videos and what kind of insights you can share about these singles?

Working on creating visual material for your music is always interesting, you have images and colors, stories in your mind and capturing them and putting them into reality is part of the artistic process. I love shooting videos, but it was hard this time! We shot in the mountains and I was 2 and 4 months pregnant like for example in “Like Never Before”and it was very cold and high up in the mountains, but it was a great experience, mostly for sharing those moments as a band. “I’m Your Cancer” was also a challenge, there were shots in the water and some violent content we left out of the final cut (again, I was so cold!!) hahah, I hate being cold. But these songs deserved the effort! In the case of “Furyborn”, we used the beautiful artwork to make a lyric video and I loved the results, it came out with a subtle power and beauty, still putting the message across.

I still remember when back in 2008, we got ahold of Aghonya‘s debut album “Oxygen” which, currently, is the only official released that you did published with this band. If you don’t mind speak it about it, there are any plans to revive this musical project for a new album in the foreseeable future? And, if not, why?

Unfortunately, not… each member took separate ways, because they all had different goals in life that didn’t relate to music (except for me). I love those guys and wish them all the best! I learnt so much from them and I cherish the moments we had as a band and the music we got to make.

What the future has in store for you in terms of touring extensively in Europe?

Well, I had a baby in December, so I’m still coordinating the logistics of traveling with him, or leaving him for a few weeks with my mom and husband. I think we’ll have more extensive show/festival touring opportunities in 2020, we are definitely working on that!

So, Caterina, we’re almost at the end and with this please be free to say hi to your fans and our readers. Thank you so much for this interview!

Thank you for your interest and for the opportunity to talk about our work! I send a big hug to the fans and readers! I appreciate your sweet messages and the fact that you took the time to listen to our work and that you loved it!! Stay tuned for gig updates!!