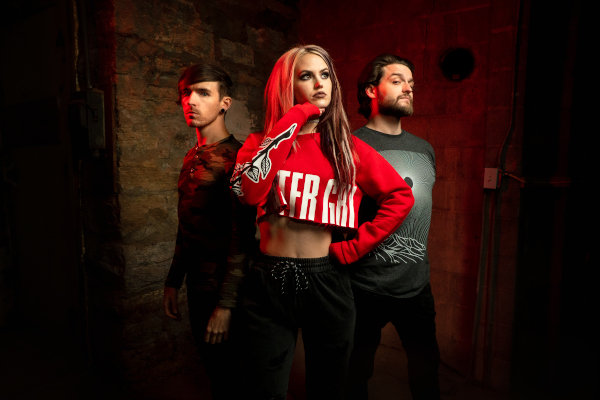 Minneapolis based modern rock’n’roll trio City of the Weak has always represented the lively part of the US musical business. They are one of the true DIY bands, ready to sacrifice their personas in order to reach their goal.

And, their new single “United Hate Division”, where they blatantly provoke the listener with their political stance, it’s a proof of that. To learn more about the band and their next plans, we have contacted the singer. There it comes CITY OF THE WEAK – An Interview with Stef F.

Hi Stef, welcome to Femme Metal Webzine. How are you? And, how these precarious days are treating you?

Thanks for having me. I’m doing really well.

So, City of the Weak some days ago has released the new single “United Have Division”.

But for the readers that aren’t familiar with you and your band, would you like to introduce us how the band got together?

Actually, we started 9 years ago back in 2012. At the time, I was living in Minneapolis, Minnesota and I was music school. Basically my ultimate goal was to create music and have a band. Indeed, I started jamming with people and however, it was crazy enough to get in a SUV for playing shows around the country was welcome. Then we came on the group that we have now. And, it kind of what it’s happening. Nothing crazy.

As I mentioned before, the new single “United Hate Division” was released on 23rd April 2021, what insights can you offer us about the song’s main theme and its production?

Actually, we collaborate for this song with our current producer Brendan Friesen. And the whole story that lies behind “United Hate Division” relates to the ongoing situation in United States. Right now, due to the political situation, it’s quite wild and out of control. You know, it hasn’t been so politically charged in a long time. And we really want to express our opinion because a lot of bands avoid to say it.

Indeed, it’s a bit of taboo and our intent is to just break the ice. Personally speaking, it’s quite bullshit that we play rock, we portray this rock’n’roll attitude while in the end, we are so divided. In the end, it’s funny that in the end our single has united people from both spectrums of extremes. And, I find it nice to notice that our intent became real.

As a companionship with the single, it was also an amazing promo clip released. Considering the challenging period we are in, how was to concretely shot a story like the one featured “United Hate Division”?

As you have said before, we tried within our best possibilities to recreate the actual lyrical theme. However, it’s still quite humorous because it features the main politicians that throughout these years have been controversially present in the news. Indeed, what we have simply did was to let me wear fat suits. Then, beat each other up while the entire population is watching on TV what is happening.

Lastly, you can see the band portraying the role of the judges while we raise scorecards. Basically, what we want to communicate is that everyone is trash. And, the politicians don’t have in mind the best interests for their voters. This politician comes out playing his guitar and indeed, he demonstrates how to unite people to the politicians. And, when he was on the top of the world, everyone was united. But, then, the politicians came back and everything was in chaos. Actually, it was crazy to shoot and it was so far our biggest production. Indeed, we are quite excited about that.

So, “United Hate Division” follows Halsey’s cover “Without Me” released back in 2019. At the time, why the choice fall on this particular song? And, personally speaking, which meaning holds for you?

At the time, we were just trying out some new songs to play live. You know, something newer, something relevant. Indeed, we just started randomly playing it. Honestly, we never thought it was supposed to be shut deal. In truth, we have a song set-list that features covers only for live shows.

Though, for this song, everything took shape while we were practicing it. Halsey’s “Without Me” has a sort of magical feel to it. And together, with the instruments, we created a more heavier arrangement. After that, we have decided to drive to Ohio and just make a fun project by recording it. Basically, it’s how it happened.

CITY OF THE WEAK’s latest full-length release dates back to 2014. And, recently, it was announced the release of an EP during the upcoming fall. Why it passed so much time between these releases?

I mean, we are constantly touring. Unfortunately, it’s 2021 and we are in an era where if you have to support your releases, you have to spend a lot of time on the road. Considering all, it takes a couple of years. Then, you have to go in the studio and start creating. Consequently, dealing with production, mixing and mastering. Then, it’s time to ideate the packaging. In the end, all this takes a while, takes a lot of time.

Also, you have together with the EP announcement, you have unveiled who will be the producer for it, and I’m talking about Brandon Friesen. What can you tell me in that regard? And, how everything began?

Actually, we got in contact with Brandon through a mutual friend. In this occasion, our friend played as a matchmaker and subsequently, we have received Brandon’s phone call. Since the first moment I spoke with him, we have immediately clicked. Sometimes, it can happen that you click with your producer but it can happen also otherwise. Instead with him, we understood straight away on the phone that our collaboration would be successful.

Really, we share the same ideas in terms of future plans and musical vision. You know, we just kinda did it. Considering all, we seriously love work with him and his engineer Chris Collier. Also, Brandon is awesome and we are definitely planning to work with him in the future too.

So, CITY OF THE WEAK is active since 2012. So far, I think that he band has built quite an extensive knowledge and live experience. Up to this moment, what did you learned about it? Also, in which manner how this factor has reflected on your studio recordings?

Basically, we write about our dark experiences in our lives. And, our album “Pulling Teeth” is simply about how is it to work and deal with the music industry. Indeed, it definitely helps to shape not only our sound but also our songs and our career as a whole. In the end, those hard experiences molded who we are now and without those, we wouldn’t be who we are now. You know, getting out on tour is harsh.

On some instances, we got robbed, our van broke down but then you come across something incredible. Such as the grace and mercy of people helping us out of their kindness of their hearts. As opposed, we have also endured people who screamed at us. You know, all the aforementioned examples represent the whole range of human emotions.

And this, it surely goes beyond what people normally experience in a lifetime. In the end, being faced with the emotional highs and lows, it will absolutely impact you. And a consequence, it will impact your work too.

Which are CITY OF THE WEAK’s plans in a short medium term?

So, what will try to do is release more music. And, we are figuring out how. But, right now, we are busy with the promotion of this new single and see where it takes us. Then, from there, we’ll see how the situation evolves.

Unfortunately, Stef, this was my last question. I hope you did enjoyed my interview and please, be free to conclude our chat as you want.

Yeah, I simply would like to say thank you to everyone who supported us along the way. Then, if it’s your first time that you learn over our band, welcome to the family. And, if you would like to check out the new single is available in all the major digital platforms.  And, you can contact us easily through our profiles on the social medias. I really hope you guys will enjoy us.