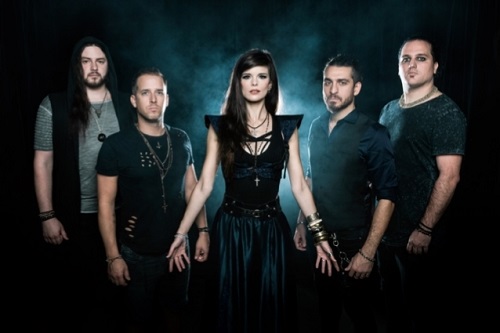 This interview’s context deserves to be properly introduced. And so, let’s start. By now, we already know, few details about the new and upcoming album “Wanderers” that will be out at the end of August but when this interview happened, it was back at the end of May, exactly on the 25th May at the Luxor, in Arnhem (The Netherlands) when the Austrian symphonic metal masters played as an opener for Dutch symphonic death metal band, MaYan. What it will follow is it a nice update about the recent events and news about VoA. Enjoy!

Hi Clementine, welcome to Femme Metal Webzine, how are you?

This is the second gig here in The Netherlands, yesterday Visions of Atlantis played in Haarlem and today you are here in Arnhem. How this tour is treating you?

Good. Very good. We have been playing for two months by now and we have just finished recording the new, upcoming album. So, it’s really cool to play with different bands: we have been playing with Serenity, Kamelot and now, MaYan. For us playing The Netherlands, it is always different because every time new people discover us and it’s always a chance to be able to play different venues. And, we never played at the Luxor here in Arnhem.

It’s my first time too and I think it’s really a great place. It’s really beautiful.

Yes, I agree with you and we are very happy to play here today.

Now, I’ll speak about your lovely Michele [Guaitoli], here. It’s my long-time friend since from 2005, so a lot of time. I saw him starting his artistic career by playing in local bands in my area and so, now he’s playing with you guys and Michele was recently added to the current line up in substitution of Siegfried Samer. How was the first approach with him and when happened during the first contact?

We knew the band Temperance and when Siegfried announced to us that he wanted to stop to be part of Visions of Atlantis, we thought about who might be the perfect replacement but we had already several options in our mind. However, when we got in contact with Michele and he sent us a demo containing some vocals with Visions of Atlantic’s songs, we were literally convinced and this we thought that he was the perfect fit for us because he has a real, natural, raspy rock’n’roll voice that completes mine very well. So, we really complete every duet now because, of course, Siegfried’s voice is really nice but very clean. Sometimes we were blending so well that people were like “I cannot hear the male singer” because we were blending too much. Michele stands out and he has his own character and he’s a very good person and very positive too. In addition, he has brought a lot to the band.

So, recently Visions of Atlantis have released their first live album “The Deep & the Dark Live @ Symphonic Metal Nights”. First of all, let me ask you what is the main idea behind it because it looks like a bridge from the old singer (Siegfried) to the new singer (Michele) and a sort of introduction…

This was completely spontaneous. When we were playing during this tour, we have figured out that we had a possibility to record our sets every night and Michele is also a sound engineer in his daily life so at some point we were like “We have the possibility to record it and why not release a live album out of these recordings?”. Actually, the idea came out when we were still on tour. Subsequently, what we do was recording the last 3 or 4 shows in order to have different material and different crowds because we didn’t hear it the same audio depending on where were playing and in that way, the product did come out. There’s a difference between the previous line up and this one because on that specific tour Siggi and Michele were singing together and consequently, splitting the set. Siggi was starting the set and Michele was finishing. Considering the fact that Siggi’s other band, Dragony, was the opener band during that tour. Also, it made it sense because it was a good way for the crowd to get to know the new singer.

Exactly, so as previously mentioned Michele is also a sound engineer…

He edited, mixed and mastered our live album. So, it’s completely made in-house, it’s homemade [laughs].

So, as you said before your new album is about to be released soon, what you can share about it? At the moment, I’m aware that you are not allowed to say a lot…

This album will make a transition between what VoA used to be and what could become. Even if “The Deep & the Dark” was pretty much about going back to our symphonic metal roots, in a way also old school, instead the new album that will be soon published contains still some songs which point toward that kind of style but it has songs more pop-py, rock-y and that are more epic. So, all in all, this album will be more diverse.

No, not progressive. This is never been our goal to approach this music style. So, definitely more progressive but way more diverse and with a lot of different influences. When it comes to our vocals arrangements, we have used our entire vocal palette: from singing very soft to sing full power. So, it’s really a journey through our music.

I’m looking forward to it.

So, I remember that a few weeks ago you performed in Lelystad together with the other girls from Exit Eden. Unfortunately, I didn’t manage to be present due to work commitments but do you have any news about a new album?

We are discussing it, it’s too early to say anything but as soon as we’ll be ready, we’ll spread the news about it, for sure.

Well, we are almost at the end of our interview, Clementine. What 2019 has in store for Visions of Atlantis?

Surely, working on the new release: we need to shoot the photos and the video and we have, I think like 9 festivals lined up in which we’ll play throughout the summer in all over Europe. Additionally, we’ll visit some places like Finland, Sweden, and Russia. So, this is really exciting. Then, we have at the end of August 4 headlining shows in Germany and 1 in Austria for introducing the new album.

Do you think that a headliner European in support of the upcoming album will happen soon and will The Netherlands be included?

Yes, next year. And about the second question, most probably yes.

So, Clementine, we’re almost at the end and with this, please be free to say hi to your fans and our readers. Thank you so much for this interview.

Well, I know Femme Metal Webzine for a quite long time.

Thank you. Despite all…

It’s like this you know, I understand it because it’s something you do for passion and it’s amazing that are people like you that dedicates so much energy and time.

Actually, I wish I can do more.

Well, it’s great that you still managed to take a few minutes to come to talk with me. So, thank you so much for your support and really thank you, for everything, really.