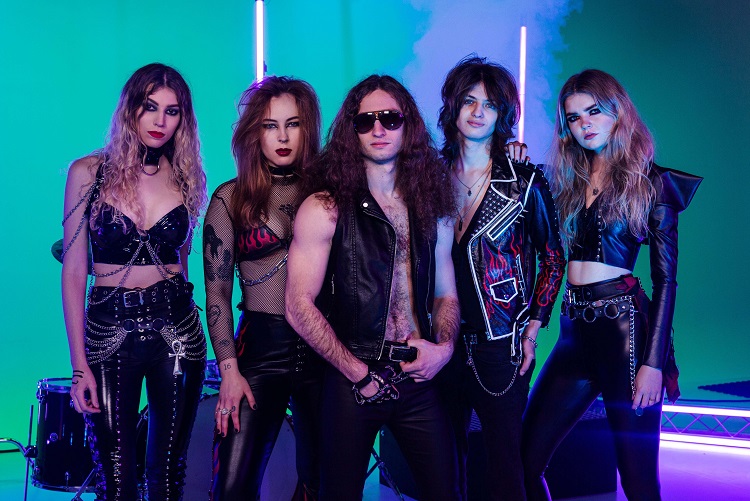 Founded by the guitar heroine Sonia Anubis, Dutch metal heroes Cobra Spell are ready to entertain us with what they do best: playing kick-ass songs with an epic 80s style. In occasion of their first European date at the Baroeg in Rotterdam, I chatted with the guitarist about the recent line up changes and their upcoming vinyl release of “Anthems of the Night”.

Hi Sonia, welcome to Femme Metal Webzine. Thank you for the short notice availability. How are you?

Absolutely. I’m happy to be here playing in my homeland in one of my favorite venues, Baroeg. It’s an experience. And it is the first show that Cobra Spell plays in The Netherlands. I’m good.

I still remember when you were still a member of Burning Witches. That time has passed. And, now it’s the beginning of a new era. The era of Cobra Spell. How and when did you put together the band?

Cobra Spell came forward in 2019 when I, Sebastian, and Sylvan. We wanted a band that resonated with the typical 80s style. Our main influences look to glam rock bands such as WASP and Cinderella. Our main goal was to bring back into the radar this type of music because there aren’t many bands. We wanted to sound authentic. Indeed, what Cobra Spell is pretty much.

In March 2022, Cobra Spell released the second mini “Anthems of the Night”. What can you share about its production and recording process? Also, which sort of impact did the pandemic generate?

For this EP, we decided to dedicate more time to the composition. By doing so, we took our time to write everything. We don’t like working under pressure. So, the whole process lasted around two years. Then, after the critical phase of the pandemic, we approached the recording process. For this release, we recorded everything at the Comeback Studios in Madrid together with our producer Alejandro Gabasa Barcoj. This release is pure heavy metal/rock madness. Since it’s important to show our identity, the cover artwork portrays the band in its entirety.

“Love Venom” represents the debut EP. What do you recall about it?

Well, if compared to “Anthems of the Night”, “Love Venom” is more a do-it-yourself production. So, it’s homemade. For example, I recorded my solos and intro at my place. While with our latest release, we started with a serious commitment to the band. Given this, we invested more in the production. And you can qualitatively listen to the difference between these two EPs. Naturally, the band’s essence is still there in an improved form.

You have just mentioned “Anthems of the Night” and its recordings in Madrid with a producer. Out of this experience, is the most important lesson that you have learned from it?

The most important lesson is that it’s always worth investing in a professional session in a studio. Even if I was skeptical about that investment, I completely changed my mind after listening to the final result. In the beginning, I underestimated that. But, besides work professionally with the best technology available, you can receive input and guidance from your producer.

A few days ago, the promo video for “Midnight Hour”. What can you tell me about the video and the song?

So, our idea was to create a sleazy party video that completely resonates with its lyrics. It’s about partying and going out at night, about having fun. It’s nothing too serious. You can also see in the video that we are jumping like crazy. It also reflects the main essence of the band.

Tonight I saw on action Cobra Spell’s new singer Cristina Vega. She was announced during the Spanish tour while at the same time Alexx was leaving. Considering the current situation, how did you manage it?

Due to work priorities, we already knew that our old singer Alexx wouldn’t be possible to commit to full tours. And this would consequently be limiting us in our plans. Indeed we are fully committed to the band. And his work plan would have pulled us back. As much as he’s a big friend of ours and an incredible talent, we agreed to separate our ways. On a human level, we still share an honest friendship. For what concerns Cristina, we met together halfway. I was searching for her, and she was searching for us. She successfully succeeds in learning all the repertoire in one week. We feel lucky to work with her now.

We have just started our tour with Enforcer. We’ll play in Germany, Poland, and Austria. Indeed, we’ll visit several countries in a short time.

After this tour de force, what does Cobra Spell have in the pipeline?

Right now, There are a lot of things coming in our paths. Thanks to this tour, we are getting a lot of opportunities. Including signing with a label, but we cannot share any details. However, our priority is to work ourselves more out there. Due to the pandemic, we hadn’t been able to play any shows out there. Since the band’s inception three years ago, we hadn’t been able to show ourselves on the stage. Now, it’s the golden chance to make difference. So, in the coming months, we’ll try to play shows.

Thank you so much for the interview, Sonia.

Thank you for having me.