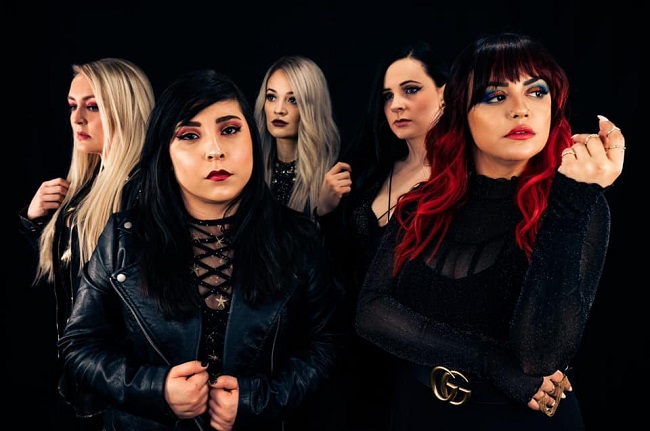 If 2020 for many bands represents the annus horribils due to the ongoing COVID-pandemic, for the Michigan post-hardcore/alternative rock band Conquer Divide it represents a comeback after a 2-years silence full of growth and maturity. In this interview together with the singer Kiarely Castillo, we’ll discover more about it. Enjoy!

Hi Kiarely, welcome back to Femme Metal Webzine. How are you? And, how are these precarious times treating you?

Thanks so much for having me back! I’m doing well, I’m excited that the mask mandate has been removed at my workplace!

In a way, August 2020 marks the comeback of Conquer Divide with the song “Chemicals”. Why did everything come to a sudden stop? And, on the contrary, what did trigger your return?

There were a lot of things going on in our personal lives when we took our break. And we finally reached a point where we felt comfortable trying to return. No one could have predicted the way 2020 would go, so we had no idea what kind of year we’d be looking at for our release of “Chemicals”.

In addition to the previous question, what is the single “Chemical” about?

“Chemicals” is about the struggles we have as artists to resist the “lifestyle” of rock and roll. I really wanted to play off the idea that fans like partying with their favorite musicians.

But don’t realize the risky effects that touring can have on a musician. I’ve also always thought it was wild when people say they like a different album because it was “before the singer got sober” and how harmful of a mindset that is.

Then, right after, your comeback single Billie Eilish‘s “Bad Guy” cover was released. What has prompted you to choose this single and why?

We are all big fans of Billie Eilish and had heard so many covers of it. Actually, we heard a lot of different things and we find interesting to give also our spin to it. We were super excited to discover that the song won a Grammy. We decided it would be a super fun cover that we’d all like.

Instead in May, your second single “Messy” was released and it followed a promo video too. What can you share about its general production? Also, in which way has brought Conquer Divide out of the comfort zone?

“Messy” was super fun to write, and a song we wanted to get out to really showcase how much our song writing has improved over the years.

In the special interview that was published on Alternative Press for the premiere of “Messy”, Izzy mentioned that “it’s a song that everyone can relate to in some way”. Why?

I agree that everyone can relate to it, and I think that’s a special part of our song writing. We can write about relatable topics, but at the same time, it can be interpreted in many ways. The song talks about a strain in a relationship, which is something almost everyone has experienced. Indeed, it doesn’t necessarily have to be a romantic relationship.

On top of all, “Messy” is the outcome of the collaboration with the band, Dangerkind’s Tyler Smyth and Joey Sturgis. How did happen to be involved in the production of “Messy”?

Tyler is great friends with Joey and Kristen, and two years ago, we vacationed together and talked a lot about song writing. While spending time together on holidays, Kristen showed Tyler a demo of “Messy” and he loved it and wanted to work on it with us! I love his producing style, and I’m so happy with how it came out.

Conquer Divide is back after a 2 years-long-hiatus. What’s the main personal lesson(s) that you have learned so far as a band? And, how did these two years of break help Conquer Divide?

I think some of our biggest lessons learned have been through our relationship with each other. We’ve all been through so much together and it really has made us even closer friends. The break also gave us lots of time to work on our craft and really get better with song writing.

We are hoping to get on some tours in 2022! I’m hopeful that we will be able to release more music soon, as well as our collab song!

So, Kiarely, we’re almost at the end. Please be free to say hi to your fans and your readers. Thank you so much for this interview.

Thanks again for having me! We have a re-release of “Messy” coming out soon with a guest vocal feature and would love for you all to check it out! Follow us on all social media platforms to stay caught up!