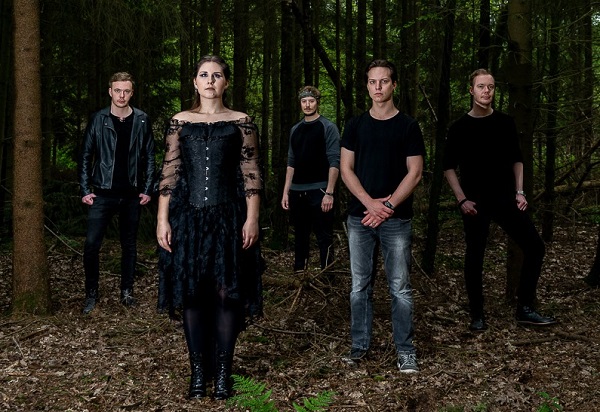 In this interview with Dim Crimson’s singer, Tamara Bouwhuis, you’ll discover more about the debut EP “The Prey”. These Dutch newcomers have released their debut EP during the first lockdown which make it nearly impossible to promote it live. However, in this interview Tamara takes the time to introduce how this symphonic metal got together and how it intends to pursue its dream.

Hi Tamara, welcome to Femme Metal Webzine. How are you and how are these precarious days treating you?

Thank you so much. Actually, I’m doing great. Despite the situation, nobody among my relatives, close members and myself has COVID-19. Even if, it’s a horrible situation, I don’t have anything to complain about.

Dim Crimson’s inception dates back to 2014 and this makes you quite a young band. How did you guys get together and would you mind introducing the band to our readers?

Sure. As you have already mentioned, everything started in 2014. Back then, I’ve met the brothers Jeroen and Bart Terpstra who respectively are both guitarists.  Actually, before that meeting we didn’t know each other but we had a common goal: play and have a band. After the first meeting, we find out that we both like the symphonic metal and Within Temptation. But, also they’re inclined to listen to some other bands such as X JAPAN and the Japanese metal scene.

In the beginning, we started by playing some covers and later on, onto composing our material. Then a few months later, a bassist that is not anymore part of the band and our current drummer Huum joined us. Subsequently the departure of the first bassist, Serafym replaced him and so far, so good.

On January 5th, Dim Crimson has released its début EP, “The Prey”. In relation to this, what can you tell me about the general production and when did  you start out to collect some idea for it?

At the time, everything started because I was studying music. And for my final exam, I needed to perform live on a stage here in Hengelo. For the exam, I had complete liberty to propose what I wanted and since my instrument is my voice, consequently the choice to sing.

Due to this, I thought it was the ideal situation for starting our recordings. Also, since we are together for much time, I assumed that it was time to get out there. You know, let people approach us and see their reaction. And indeed, this is the inception of everything.

So, the EP “The Pray” features 4 songs. Would you like to introduce us the songs and its lyrics?

Of course. My lyrics were partially inspired by own stores which they come from my imagination. Or stories that I’ve been told to. Indeed, the lyrical themes are quite dark which I also find quite inspiring. Even if , “The Devil’s Got a Hold of Me” is the fourth song listen in the EP, I’d like to start with this one because is one of my favorites’. Mostly, it’s about someone who had a bad experience and this led this person to become a hollow shell.

Instead, the second song “Dissolution” is mostly about betrayal and love. In this song, I depicted a person who on a verge of dying, and during this particular moment, he/she comes to terms with the fact that he has been betrayed by his/her love.  While, in the first song, “The Pray”, there are two deers, mother and son, in this beautiful field full of joy and food but during the night, this meadow becomes a dangerous place because it’s a wolves territory’.

Naturally, the mom advices not to go there. Nevertheless it’s quite difficult to yield to temptation. Yet, the little deer approaches anyway the meadow and the song touch on the consequences of his choices. Then, the last and third song featured in the EP is “Falling Apart”. It deals with depression from a different prospective. Not through the eyes of the sufferer but from the perspective of the loved ones, who’s trying to help out this poor soul.

From what I’m aware of, the EP self-financed through a crowdfunding. Actually, I couldn’t find detailed information in that regard but which were the band expectations? Also, when did you realize that was the right solution for the band?

Actually, we weren’t so sure that we would succeeded in it but I already did know was that I have a supporting family who has even backed the campaign. I was quite nervous about its outcome, however this represents a dream coming true. Indeed, it is just sharing my feelings and ideas with the world out there and then, see what it happens next. In the end, I just went for full steam on for it.

“The Prey” EP was recorded at the Milk Mark Studios in collaboration with the former Stream of Passion keyboard player, Jeffrey Revet. How was working with him and what did the band learn from that experience?

Actually, we learned a lot because we never have been in a studio before. Personally speaking, it was great and I really love it. Throughout this experience, we have learned a lot how to write a song and Jeffrey helped in that. As a matter of fact, our collaboration with Jeffrey started sometime ago in occasion of our first gig during a band context.

He happened to be a juror and immediately after, he approached me and he proposed to help us. So, his first proposal was to add some keyboards lines in our songs. Then, we had some pre-production with him too and during this phase, he helped us out in improving our songs, to make them sound much more homogeneous. During the course of this pre-production stage, we have added and removed sections in our songs, so it looked like a work-in-process.

It feels like you had need of that extra help yourself…

Yes. You know, if are writing your songs completely by yourself, you aren’t objective and you are in need of an additional opinion and feedback. In this case, Jeffrey’s advices were useful and handy to improve our writing. After that, he recorded some rough demos and then, we entered the studio and started to reworking on this material together with him.

Indeed, it’s how we managed to wrap up the EP. As soon I’ve listened to the final version, the first thought that popped up in my mind is “this is so cool and great”. In the end, it was really great to work with him.

Usually, when newcomers release new material, it’s quite logical to play a release show. Unfortunately, due to the COVID, this it isn’t happening. Except this, how in general this pandemic has impacted the band?

Of course, all this situation has just damaged us. Practically, this big EP release show coincided with my exam and out of the sudden, it was cancelled. Naturally, I felt really horrible for this sad happening because this was one of the dreams.

Secondly, due to the social distancing, we couldn’t able to record together in the studio. In a way, we missed an important part of the whole experience because we couldn’t able to confront each other or simply giving ourselves instant feedback and impressions.

So, we were forced to postpone our recordings sessions which led to a considerable delay in planning the EP release. Originally, it was supposed to be released in June but then, everything was moved to the beginning of 2021. Considering that, we have just to adapt and try to find a momentarily solution because in these situations, you cannot exactly have the control of everything.

So, Tamara, what does the future hold for Dim Crimson?

For the time being, we want to promote our band and get the word out there as much as possible. Then, when we reach that goal, our plan is to go back in the studios and record another EP. Also, we would like to shoot one more video clip from our début  EP. I think, it’s good manner to reach more people but at the moment, there’s no budget.

Sadly, Tamara, it was my last question. I hope you did enjoyed the interview. I hope to meet you soon.

Thank you really much for having me. I feel really honored to have talked to you.