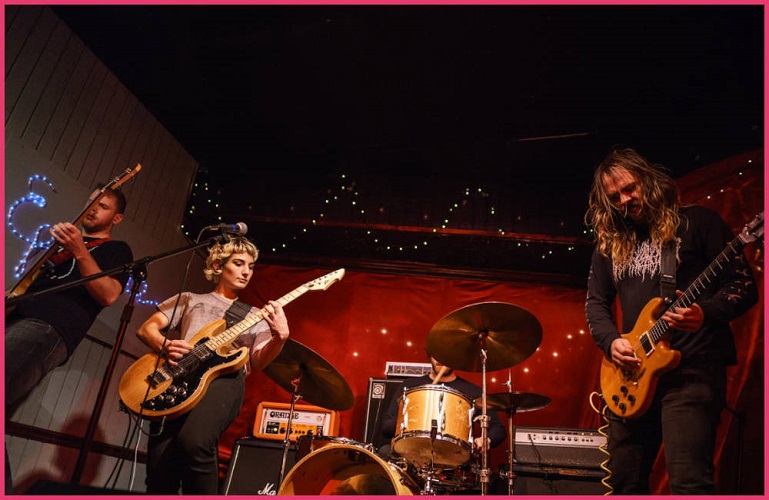 For who is not aware, Dirt Woman was a famous cross-dresser from Richmond, Virginia. However, this name embodies also a new upcoming psychedelic doom coming from the same location. Currently, the band is promoting their debut album “The Glass Cliff” via Grimoire Records and so, we took the chance to interview to the singer Zoe Koch.

Hi Zoe, welcome to Femme Metal Webzine. How are you and how life is treating you in these precarious times?

I’m well thank you! We have been lucky enough to continue in person practice, with more free time we are in a very fertile creative environment which makes getting through this a lot easier.

For our readers that still aren’t familiar with Dirt Woman, would you like to recall us how the band got together?

Yeah! I met Gabe and we got a long really well so when I told him I had just started playing guitar he helped me get to the point where I could navigate the fret board and recognize time signatures which gave me the ability to write songs. From there we put a set together and started gigging, eventually we acquired Kearny and Avery as our twin rhythm section which marks the real start of Dirt Woman.

Dirt Woman’s debut album “The Glass Cliff” was released recently in March via Grimoire Records. What can you share about its general production?

The album took us about a year to write and we were still throwing pieces together up until we recorded, we spent two weekends in the studio with Noel and it was a great experience, it was our first time recording outside of a garage and he practically held our hands through the whole thing, he does amazing work and we couldn’t of made an album like “The Glass Cliff” without Grimoire.

I quote directly from the press release about the lyrics: they are “speaking directly to the cries of today’s youth”. I’m curious to learn more, what would you like to add?

I wanted to speak about the deepest insecurity most young people have when thinking about our future, and that is that there won’t be one if our leaders don’t act. Honestly, I don’t think people should listen to musicians about politics, but at the same time if you can create a platform for people to hear you and there’s an extreme crisis about to hit your generation you might as well speak your truth and hope someone listens. We need more activist and community leaders to sway corporations’ the general public’s daily actions towards sustainable living and create the change necessary for our species survival.

In order to promote “The Glass Cliff”, you have published as a single the epic 13-minute long song “Creator”. What special meaning has for you (as a band) this song?

“Creator” was the first song we all pulled together to write. Gabe and I used to bounce riffs off each other and lay the songs but with creator we all had a hand in the stew and it was the turning point for our song writing process. For me, “Creator” was this first song I had written with a clear vision for what the lyrics should be about, it was around the time Trump had vowed to appoint anti-abortion justices to the Supreme Court so when given the proper case row vs wade could be overturned and I just got so upset, thinking of all the women who will suffer because of the men in power.

We are well aware that Dirt Woman was also a Virginia based cross-dresser. In effect, how does his real life character connect with the musical style of the band?

I was literally flabbergasted by the cover artwork. First of all, who’s the author of this chef d’œvre? Secondly, how does it relate with the lyrics itself?

His name is Hayden Hall and I had the pleasure to work with and he is insanely talented, I talked to him about some of the lyrical themes and he came up with this beautiful piece which is basically just the scifi version of today’s economic inequality issue with an underlying sense of environmental disaster.

In normal times, this question doesn’t procure any embarrassment but I feel anyway obliged to ask you if you had any plans to promote live “The Glass Cliff ” and instead, how your plans changed?

We had our release show canceled on March 13th and after that our gigs started dropping one by one and that it was heart breaking, but we are more concerned with the well-being of the public so we won’t be rushing to get back on stage. We are currently writing new music and saving up to get a van, we are prepared to wait and keep ourselves busy in the meantime.

So, Zoe, we’re almost at the end and with this please be free to say hi to your fans and your readers. Thank you so much for this interview.

Thank you so much I’m so grateful for these questions. Our record is for sale on Grimoire Record’s Bandcamp, we’re on Instagram and Facebook. I hope everyone has the supplies they need and a stable home to quarantine in, if not please reach out to your local food pantry, shelters, and relatives. If you have the means please donate what you can to your local humane society, food pantry, and clothing drives. Please reach out to people you think are at risk of increased mental illness during this time, and keep yourself busy!