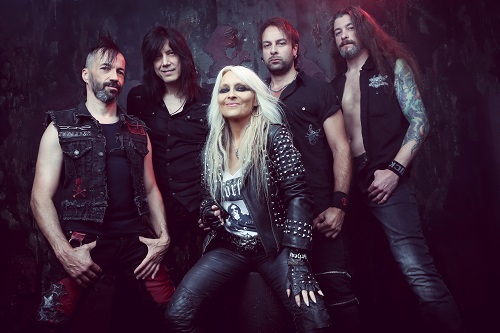 Actually, when I had this interview scheduled, I didn’t know what to expect. I was both scared and excited at the same time. Even though, it’s so many years that I write and conduce interviews and believe me or not, there’s always one of those artists for which I just feel some overwhelming fear, and Doro is one of that.

What’s really disarming is her granitic attitude. When you speak with her, you feel completely overwhelmed by her primordial energy and, when the interview is finished, you would like that this conversation never stops. Interviewing Doro is not a regular answer and question, it’s more of a informal chat between two friends and it’s a literal deluge of happiness and positive attitude.

Despite the precarious times, Doro has a nice word for everyone and everything, and when approached about the upcoming tour (and her upcoming date in Leeuwarden), the singer warn “we still don’t know if this whole tour will happen because of COVID 19, but so far is going to happen and I’m so excited about it”. Speaking more thoroughly about the current situation, she says “all our tours got canceled. I had in plans an European, American and Australian too. I have also a South American one in September but when I watch the news on the TV, I’m not so sure that it will happen” .

She doesn’t even hide how this impacted her, if we consider that her band is international based: “Our Italian guitarist Luca [Princiotta] couldn’t partecipate to a couple of festivals because Italy was one of the first countries to close its borders but luckily now, he play again with us and he’s an awesome guitar player! Instead, our drummer Johnny at the moment, he cannot fly here“. She also expresses her worry about the current situation in the musical business: “Certain clubs in which we were previously booked have already declared bankruptcy” and she affirms that “is hardcore and I never seen something like that and I’m sure that anybody has seen it, it’s so bad”.

Recently, Doro has published a single called “Brickwall” via Nuclear Blast Records and she shared with us a little bit about its production and which meaning holds for her : “I started to write this song last year, and when the virus hit, it was clear that any chances for touring evanished, so I kept working on the song. The meaning that I tried to express in the song, is when you are supporting someone in a difficult time. It can be your best friend, your girlfriend, your boyfriend, your dad and your mom. But it’s whoever is in trouble and you go to any length to help to save him/her, to bail him/her out and you’ll tear down the wall for help this other person. At first, the working title of “Brickwall” was “Till the Day I Die”. That title entails that I’ll do whatever it takes to continue loving that person but when the virus hit I thought it that it was too heavy because everyday on the TV we could see that people were dying, so it was changed in “Brickwall”. COVID-19 impacted even how this song was recorded and mixed because when I finished the song, I found myself with me in one room and the engineer in the other one and we’re interacting from a distance through a microphone. Also, everything was mixed by Andreas Föhn in Hamburg and the whole recording session was back and forth between various studios. Then as an appetizer for the upcoming album, I sent this song to Nuclear Blast and they liked so much to the point that they proposed to publish it as a vinyl single for collectors. This came out by surprise because, it wasn’t planned it. For a project that I’m currently working on, I had already mixed and so, ready to be published, one of my favorite song ever from “Forever Warriors, Forever United”: a live version of “Brothers of Metal” which was recorded last year. It was quite natural to use as SIDE B on the upcoming 7″ which will be released on July 26th. “

Additionally, the single “Brickwall” comes along with a video too, due to the particular times we are in, this proved to be quite challenging to film it: “At first, I thought that a lyric video was more apt to the situation but I love so much that song that I know that a lyric video would not worked out. Personally I find lyric videos really boring and you know, you just watch them one time and then no more. So, during the lockdown, I asked a friend of mine to film me, however, it appeared that for some rules, we had to change the ending and when I went back to that abandoned factory in Dusseldorf, someone has literally tear it down in two days. In retrospect, this event suited the song perfectly. Probably, it was meant to be [laughs].”

The singer officially stated in her official press release that “Brickwall” is an harbinger for the upcoming album”. So, when inquired about its expectation, the German queen admits: “It will probably be a continuation from where “Forever Warriors/Forever United” left. It will for sure have hard and heavy, fast songs, anthems, feel-good songs which will empower people with some important messages and of course, some nice and soulful, dark, romantic ballads. In the end, just expect the whole spectrum from anthems to ballads. As per my tradition guest vocalists will not miss but at the moment I don’t really know who will partecipate, but I’m definitely working on two special guests”.

While preparing an interview, I’m always accurately listen to the latest artist’s release. This time, her cover of the very well-known song “Caruso” stroke me a chord to the point I started to cry when I listened to it for the first time. Since I’m Italian, at the beginning she was really worried about her pronunciation but I definitely reassured her about it and when I mention the fact I have literally felt her hear in her interpretation, she cheerfully admitted and she adds about the song: “Oh, that’s good, that’s good because it has always been one of my favorites songs ever. I called my guitar player Luca and I proposed him to help me out for this song. Aside the vocal extension, the difficulty is related to the correct pronunciation and you need someone how can exactly instruct you on that. After the recording, Luca had the idea to play the song for receive some useful feedback. So, he end up playing this song to his mother which she simply started to cry for its beauty. It was definitely a challenge of which I wasn’t sure of its outcome, at the end it worked and I love it.”

Though she honestly confesses: “If I have to sing it live, it can be too difficult. First of all, the vibe needs to be right, it needs to be properly rehearsed and my voice needs to be in perfect shape which can be complicated due to the the long tours. But I’m up to the challenge, I’ll try!”

After this memory, she indulges in more details about the production for her last album“Forever Warriors/Forever United”: “At the time when I approached Nuclear Blast, I had so much songs and ideas that I proposed them to publish a double CD. Since the current times, the label was quite dubious about this choice. Nonetheless, they change their mind and considering that album is my 20th in my long career, they supported my proposal. Thus, I had to create something special, which had a personal meaning for me. To reconnect to all this, I decided to include a Whitesnake‘s cover of “Don’t Break My Heart Again” because David Coverdale was one of my inspirations. Also, this record was dedicated to Lemmy, so that’s why a Mötorhead‘s cover of “Lost in the Ozone” is present. Principally, I love Lemmy as lyricist and that song is only known by the die hard fans. “

As we already know, this pandemic has seriously impacted the entire music business, especially a niche like the metal one. For absorb the shock, recently several bands decided to play some drive-in shows and Doro continues: “When we found out that all the gigs, all the tours were canceled and I wanted anyway to play live. The main issue to solve was to find a way that won’t harm anyone on the long run. So, we came up with the idea to play in a drive-in. I was really nervous the first time that probably I would have performed just once [laughs]. Anyway, I enjoyed a lot and I attempted to interact with the audience in the best way possible because you don’t feel much their presence. People are in their car and even when they scream, you don’t see them. For example, in the video of “All We Are”, I jumped out of the stage and invited the audience to honk the horns and to show me their blinkers. Actually, what I did, it was forbidden but I broke the law and I did it any way [laughs]”.

When remarked about the presence of security behind and after her, she says: “They were making sure that I wouldn’t get too close and people would try to come to kiss and hug me. They were just there to be comply with the law. In truth, he was a real cool guy and he wasn’t mean at all. It was like having a nice and huggable teddy bear [laughs]“

On a final note, she reflects about it and she states about this experience:“I had a lot of fun. On the other hand, it is not like performing on a normal concert and considering the current situation, this is better than nothing”.

For her next plans, the German queen mentions a couple more of drive-in concerts and a beach chair concert in late August, which she finds challenging because she will have to motivate her fans to be seated throughout the whole show. On a last note, Doro announces: “Before Christmas, I’ll release a compilation called “Magic Diamonds: Best of Rock and Best of Ballads”. They will be 40 more songs coming out soon. At the moment, we are busy with the mixing some live versions, some re-recordings and some alternate versions. Instead for the new full-length, I wanted to have a little more time for its final details”.

As a closing, the amazing and loving singer wishes to “say to all the readers and the fans that I’m so thankful for the support throughout all these years. I love them more than anything in the world and I hope everybody stays happy and healthy. Keep on rocking! Stay metal! You’re always always always deep inside my heart . Für immer, forever.”