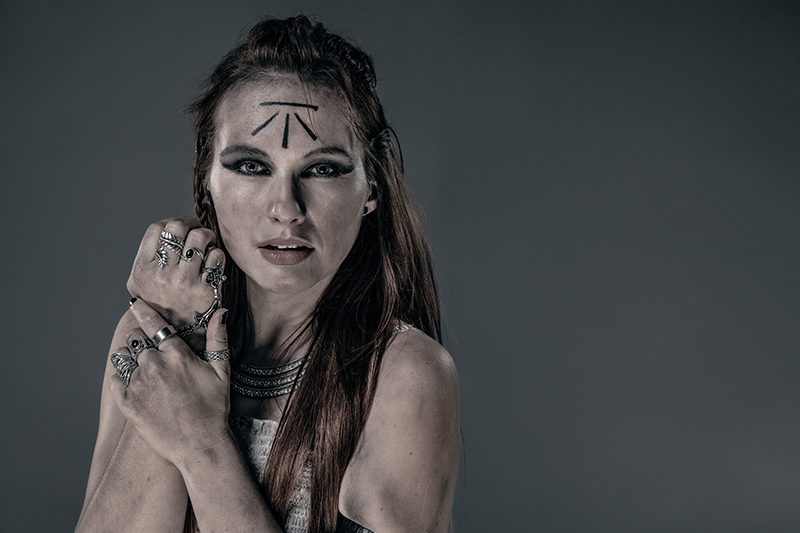 With the latest studio album, ‘Ategnatos’, the Swiss act Eluveitie gave a further proof of how changes, sometimes, can be a more than positive effort in order to find a brand new energy and a rediscovered vitality, which perhaps was a bit lost over these latest years. Strong with a new lineup which sees the entrance of Fabienne Erni (harp and vocals), Michalina Malisz (hurdy gurdy), Jonas Wolf (guitars) and Alain Ackermann (drums), the Swiss ensemble gets back on track and introduce the International fanbase the result of this updated dynamism, the first live album, “Live At Masters Of Rock”. On the occasion of the Italian show held in Bologna, supporting Lacuna Coil, we met the beautiful and smiley Fabienne who is now sharing the latest band’s experiences and some thought concerning this new release.

Hi Fabienne and welcome to Femme Metal Webzine. It’s a great pleasure hosting this chat with you today. How are you? Moreover, welcome to Bologna as well! Is it your first time here, right?

Fabienne: As I remember, we played here in Bologna in the summer, in a summer festival. I don’t remember the exact name, but I remember it was in Bologna and it was so warm, so hot! It was the hottest show I’ve ever had, I guess it was 30° in the afternoon! Craaaazy! Ahahaha, it was a crazy show!

Fabienne: Oh yeah! But the crowd was going crazy, I could haven’t done this but I think they are used to the heat!

Before talking about your first live album, I would love to make a step back and talk about ‘Ategnatos’. It was the second record that Eluveitie released with the new lineup, so to say, so how was the approach this time around? How did you and the other guys work with this second album? What has actually changed also in the songwriting and recording process?

Fabienne: It was different, actually a pretty huge difference, between this album and the first one that new lineup recorded, it was an acoustic album, so ‘Ategnatos’ was a huge difference, just also vocal-wise and recording-wise. We just used different techniques for it, so that was one thing; otherwise, it was mostly, well, Chrigel is the mastermind, he is working really tighly together with Jonas, the guitarist, they work together on the songs, and mostly I get the melody and the texts, more or less, then I fix everything together, so it’s singable, it’s doable, ehehe. Then I give my little inputs like: “Hey, let’s try this, let’s try that!”, this is how all is done. We recorded in Switzerland during a really, really short amount of time, it was tight, but it was very intense… It was a good time, anyways, sometimes we were like: “Oh my God, how could we even do this?”, yeah, but we made it and we’re really proud of it.

What kind of reception did you get from both the fans and the press?

Fabienne: Actually, mostly good! I was a little bit, ehm, not concerned but I was really curious about how people could react! We’ve got so many positive, so much feedbacks, so we are super happy! Yeah!

You’re a multi-instrumentalist player, you also play harp and this arose a lot of curiosity, both in the metal audience and Eluveitie’s fans, since it’s a bit unusual to see this instrument live on stage. How did the idea of introducing the harp in Eluveitie’s family come to birth?

Fabienne: It was because I don’t sing in every song, so I could choose an instrument and I chose the harp, because I really love the harp. I’m really happy with the parts that I could get in the ‘Ategnatos’ album with the harp. I think it really adds some magic to it in some certain part, so I’m super happy with it. Yeah, I think it’s a very magical instrument, I just really like it! Yeah!

How do you feel sharing the stage with two other girls?

Fabienne: Oh, well, it’s amazing! I’m super happy that we are three girls in the band, you know, on tour and always hanging out with the girls, it’s super great! Overall, we have a very good connection within the band, which is super important, I think, not only on tour… being in a tourbus so we are together, but also on stage, interracting together, having this one feeling together and pushing it to the crowd…

So, you’ve released your first live album, “Live at Masters Of Rock”, last week. What kind of feedback did you get?

Fabienne: Actually, since I was sick so far on tour and I was almost only sleeping, all I did was checking Instagram and the feedbacks I got were only good, eheheh! I don’t know if I wanna go on Youtube, maybe not… Usually I don’t read Youtube comments and stuff, I just do on my personal Instagram. I’m so happy that so many people just gave me really good feedbacks, it’s amazing!

I guess this was something ‘due’ now to release a live album. Almost every band needs to unleash something similar in its career, so how did the idea of publishing such a record like this come from?

Fabienne: Actually I don’t know, it was just suddenly a topic that we would record this show and we said: “Oh, okay, let’s do it”. I was really nervous at the beginning, but then I just forgot about it and I just did enjoy the show. The crowd there was amazing and the whole festival is really cool! The acts that were there… I enjoyed it so much! It was huge and I’m super happy that we actually recorded this evening, it was very energetic, so we were lucky, eheheh!

Do you feel more comfortable in playing and singing the old songs or the new ones?

Fabienne: Of course I really love singing the new songs, because they’ve been created when I was there and I could sing ‘em in the studio and everything, of course… They feel more close, but also, I mean, I love ‘The Call Of The Mountains’, I really love it, ‘Quoth The Raven’… In the end, somehow, the songs fit vocal wise, vocal range wise really well for me, so I was lucky, ehehehe! It doesn’t matter so much, to me it’s about what the people want to hear. It’s about them, for me both are fine, but of course the newer ones… I mean, I think I could speak for everybody that is newer in the band, when you’re there and the song is warm, you’re in the studio and you can contribute with something of course it feels a bit closer. I think it’s natural!

Which is the song you feel more connected to and why?

Fabienne: Mmh, I really love ‘Breathe’, I just really love the melody and the lyrics about it, the whole mood. It’s just made for my vocals, for my vocal range, it just comes without any effort, kind of… It feels like natural to sing it, so I really love this one and also my second favourite one is “The Slumber”, mostly because of the meaning of the song, I like singing it live too, yeah! Those are my favorites, I would say!

What was the most thrilling and amazing moment, if there was any, you recall of this live experience?

Fabienne: So hard to say… There are many, many great moments that I got to experience so far with the band, but one thing that I will never forget was the Summer Breeze show, last summer, where we had a lot of fire… I forgot the name… Pyros! There was a lot of fire on stage! That was a super crazy experience, because the fire was right in front of my face and it was so hot! I really felt like my lashes are gonna get burned and my lens contact are gonna melt, but it gave us so much energy at the same time! It was crazy! Then you headbang and all you see is fire around and you’re like: “What the fuck?”… That was a really special show for us! It was fun.

You already played two shows in Italy for this run, Bari and Rome. How did you feel being on stage and warmly welcomed by every single fan?

Fabienne: Oh, playing in Italy is super cool, people are so energetic and also singing ‘The Call Of The Mountains’ in Italian is very challenging, but I like it! Ehehehe! Yeah, yeah, so we are enjoying it, so I think it’s only tonight and tomorrow and then we will be done with Italy. Yeah, it goes quick, it goes quick, but we’re enjoying the next two shows, eheh.

It will be my first time in seeing you on stage tonight here in Bologna. If you were to give me a picture of the show, what would you tell me in order to prepare myself for this new wave of folk metal?

Fabienne: Be prepared to maybe not understand all the songs, because we sing in Gaulish, some are sang in the Ancient Celtic language, so that could be very special… Be prepared for some maybe weird instrument, like the hurdy-gurdy, everybody knows it…

It will be so beautiful!

Fabienne: Yeah! It’s really, really nice and yeah, just be ready for an interesting, melting between metal and folk.