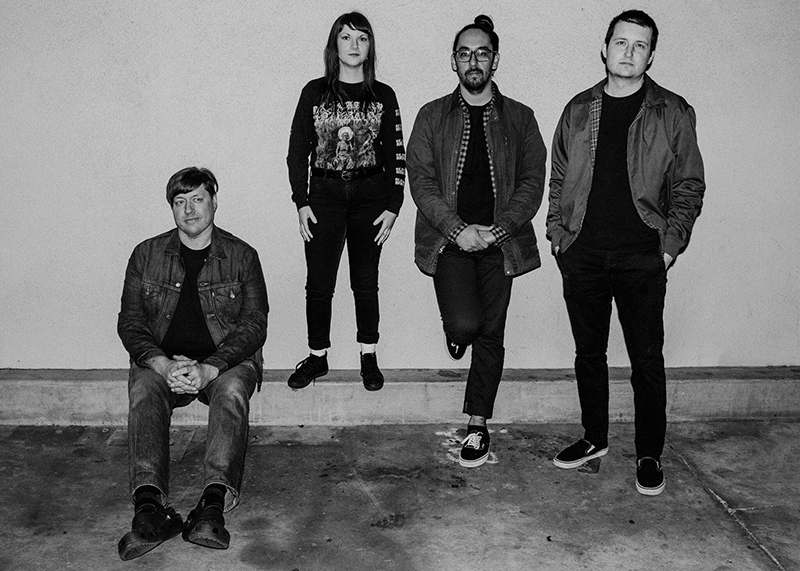 Los Angeles’s Entry with its fierce and sheer attack of hardcore and punk is ready to conquer the world. Strong of the sold-out 7″ debut, “No Relief”, published in 2017 via Dune Altar Records, the quartet has released its debut album “Detriment” via Southern Lord Recordings. Defined by the specialized press as “compact and ferocious” and “a breath of fresh air in the genre”, Entry attracted the interest of Mr. Greg Anderson himself. Let’s read together what the singer Sara has to say about this new musical adventure. Enjoy!

Hi Sara, welcome to Femme Metal Webzine. How are these precarious times treating you and how are you managing with it?

I’m doing pretty okay. Having not seen friends or go anywhere for 4 months definitely has affected my mental health a little bit, but thankfully technology helps keep me connected to my friends and family.

Right now we are dealing with huge social justice issues and I am trying to focus my energy on that as much as possible.

For the readers that still are not familiar with Entry, would you mind to introduce how you guys got together?

Clayton and I started the band in 2013 when we were living across the country from each other. I eventually moved to Los Angeles, and we found a couple of friends to join the band.

After a few changes, we solidified the lineup with Sean on bass and Chris on drums. We met both of them a couple of years after I moved here just through going to local shows.

The debut full-length album “Detriment” will be released via Southern Lord Recordings on July 17. What can you share about its general production? More precisely, where we can pinpoint the beginning of the whole process?

Sean and Chris joined the band after we released our 7″ “No Relief” and we were really excited to write new songs with them. We decided we’d try to write enough to hopefully put out an LP. We wrote, demoed, and recorded it late 2018 into early 2019.

When we had the songs written (aside from lyrics since I always last minute those) we started recording the songs ourselves. Sean and Chris are both recording engineers, so they shared recording duties and Chris mixed the record. It was finally mastered by our friend and punk legend Will Killingsworth.

As stated before, “Detriment” will be released via Southern Lord Recordings. Considering the importance that this label has on the musical panorama, how did you come across them and how was collaborating with Greg Anderson himself?

Greg somehow found out about us and ordered our 7″ online. When that order came through, we were so excited; we sent a note saying that we were big fans and thanked him for buying the record. Over the next year and a half or so, we played a few shows that were put on by Southern Lord.

When we finally had our new record done, we sent that to Greg and he wanted to release It. We’ve had a really great experience working with him and his team. He really embraced what we did and just helped us package it.

Out of “Detriment”, there were two singles released: “On Your Interest” and “Selective Empathy”. Which insights can you share about these particular songs?

“Your Best Interest” is basically about how the legal system here works against you unless you have money. “Selective Empathy” is about the struggle with people who have been corrupted by the news and right wing media.

If compared to the sold out 7″ debut “No Relief” released via Dune Altar Records, what structural differences can you notice between “No Relief” and the upcoming “Detriment”?

I think “Detriment” really let us expand on the different styles of music we enjoy listening to and playing. I think with Sean and Chris, we are more of a cohesive band now. Everyone put pieces of themselves into this record, and we were able to build on that very organically.

“Detriment”, if you allow me saying this, per se, is a strong word with an important meaning. In this specific case, what stands for and which connotation do you give to this word related to the album?

I really liked it as the album title because of how strong it is. It can be applied to every song in a different way, whether It’s about something that has personally been a detriment to me or is a detriment to society.

Before concluding our interview, I would like to spend a couple of words on the cover artwork. I see this white rose and on the side several shots with a girl in some different positions. How does all this connect with the songs that we can find on “Detriment”?

The art is more of an abstract representation of the emotions on the record. The photos were taken based on the lyrics and just meant to give a vague sense of the overall darkness of the record.

In normal times, this question doesn’t procure any embarrassment but I feel anyway obliged to ask you if you had any plans to promote live “Detriment” and instead, how your plans changed?

We were actually scheduled to start a two week tour on the east coast in the US in mid July along with playing the Sound and Fury Hardcore Festival in California. We were also planning to play a few short weekend tours around the west coast.

We have had to cancel everything unfortunately. We don’t know when live music will start here again. Our country is dealing with the pandemic very poorly.

So, Sara, we’re almost at the end and with this please be free to say hi to your fans and your readers. Thank you so much for this interview.

I really appreciate the opportunity to share with everyone. I really would like to extend a thank you to everyone who is checking out Entry for the first time and I hope you enjoy the new record.