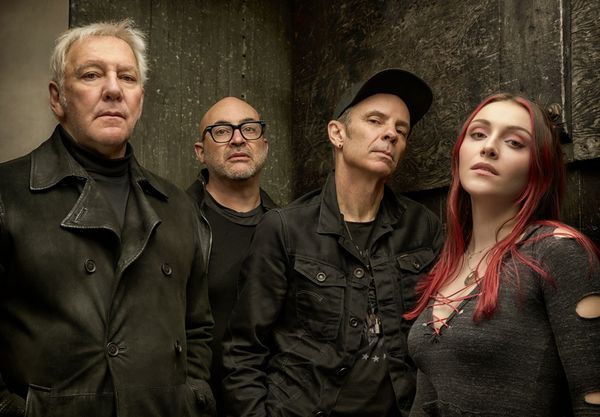 Probably to the most the name of our interviewee on this occasion does not immediately sparkle anything musical-related. But, the American singer Maiah Wynne was lately involved in the new Rush‘s Alex Lifeson band project Envy of None whose debut album was released in April this year (read the review here). In this enthralling interview, we discover together how EON got together. And, how despite the pandemic, friendships were built. Enjoy!

Hi Maiah, I’m honored to host you here today. How are you? And, how is this period treating you?

Considering the worldwide situation, I’m doing pretty well. I’m grateful to be able to continue making music. And, keep on pushing through.

My heart goes out to everybody out there because, in the last years, it has been an emotional rollercoaster. But I feel fortunate to be overall doing good.

I think I’ve always been attracted to music. Indeed, I started taking piano lessons when I was 3 years old. After that, I continued learning guitar, ukulele, and drums in a self-taught way. And even more and more instruments. Around the age of 7, I began composing my first instrumental songs, and I turned 13, I debuted with my first performances by playing at coffee shops and piano bars. However, I was 15 when I decided to pursue music as a study. Everything blossomed from there. Then, after graduating High School, I focused all my efforts and energy on music. And, it has been going in from there.

From there, we got to talk about Envy of None. I mean, it’s August, and we’re already way beyond the half year. And, Envy of None‘s album (already) in my 10 Top Ten of this year. How and when did you cross paths with Rush’s superstar Alex Lifeson for this new musical venture?

Back in 2016, I won a musical which helped me to get in contact with one of the other band members, Andy Curran. Indeed, the prize of this context was a zoom call mentorship with him. During this appointment, we began to talk about music which then naturally developed into a possibility to collaborate. Eventually, we started to compose together. Then, Alex was involved in our collaboration because he’s one of his longtime friends.

Also, he wanted us to let him listen to our material. So, after the listening session, Alex was so intrigued that he wanted to join us. Well, that’s how everything started. Musically speaking, we get each other. I would describe our relationship as two musical siblings. We are on the same wavelength in terms of music and harmony composition. It was inspiring to work with him. And we kept on sending files back and forth from afar. I immediately felt a great musical connection. That has been a remarkable collaboration.

Being familiar with your solo material and project, how much difficult was it to adapt and share everything with the other four people? I think that this experience proved to be a learning curve too.

It’s shocking to work in a band, but throughout these five years, I’ve learned a lot about it. It developed naturally. Over this period, I have had the chance to improve my musicianship and my production skills through different vocal styles. It has been a learning process on how I write both vocals, music, and lyrics.

The result is that I can bring into other authors’ pieces myself and all my musical peculiarities. It was nice to challenge myself with a new genre and try new approaches to song-writing and teamwork. When you work with other members, you have less control, and we hesitantly wait for what will happen next. I feel much more comfortable collaborating with other artists thanks to this experience.

There’s one crucial factor, and it relates to the lessened control in a group. Consequently, you have to hold a lot of trust in your band members because without it is not feasible.

Exactly, you got the main point. You have to have trust. And we developed this over time. Naturally, it was so easy to send my vocal parts and let them do what was required [laughs].

Envy of None‘s debut was almost four years in the making. Which is the main factor that has negatively impacted its general production?

Over the last four years, we have been through a lot. It has been interesting to experience the development of each of us as people. Indeed, the beginning of its production is pre-COVID. This had an enormous impact on our personal lives. Despite everything, I think music has been a constant in our daily lives. It has helped us to keep grounded during an uncertain period. It was good that we had this project because we have fully dedicated our attention and energy to it.

For example, the song “Enemy” evidenced how the events have impacted our lyrics. At the time in Portland, some protests were going on. And it’s interesting how our songs can share a relation, now that these events have already happened. So, this song has developed different meanings over time.

In the end, this collaboration had its inception when I was 19. And now, I’m 25. So, Envy of None is representative of my passage from a girl to an adult too. In the meantime, I grew up a lot. I can feel it also in the way I sing. It is like a time capsule that has captured everything.

Considering all the great feedback received from media, press, and listeners, which is your final reflection?

I’m proud of it. When I was involved in the project, I had no clear idea of what the outcome should have been. Now it’s powerful to listen to it. We put in a lot of love, work, and effort. I’m proud of its outcome and of the bond we have built up. We became real friends. In the beginning, I felt nervous and intimidated. While I listen to the outcome, I perceive how layered the songs are. And this gives me a different perspective every time I listen to the album.

Rush’s Alex Lifeson stated in several interviews that you became his muse. When did you realize Envy of None was about to turn into something serious?

I had no idea because I thought it was a casual collaboration. Despite this, I always put 100% of myself into the music I create. When Andy heard “Shadow“, he realized everything was preceding in the right direction. Once Andy and Alex noticed, that got the ball rolling. We had gathered together something as ten songs, and we discussed shopping around some labels for an eventual signing deal.

You have previously mentioned the intimacy that these songs express to you. To what in particular are you referring?

I always wanted as a singer to compose songs that I can relate to. I work hard on that. Even though it was a collaboration, Andy would always offer me the right idea on which to build up a lyric. He challenged me to take those pieces and create something honest and meaningful. This experience helped me write about thematic that I would normally not write. Take, for example, the song “Dumb” on the surface, it seems a silly song.

But, deep down, I relate to that song. People’s behavior as demeaning your identity and a sense of superiority is something that many people can relate to. It was a clever way to address this issue on a sing. “Dumb” is just one of the examples I can mention because I’ve thrown myself into my personal feelings. For me, music is a place where to connect with people on a personal level. And share a story and a perspective. Given this, this collaboration allowed me to delve into different topics as I have done before. So, yes, there’s a lot of intimacy and vulnerability.

What is in the pipeline for you and Envy of None? Is there any concrete plan to bring this album out on the road?

You know, it is a good question. We want to create more music together. At the moment, I don’t know if it will turn into my main musical outlet because I also have my solo career. Surely there will be a new album coming up. About my solo career, my new album is in the works. And, all the Envy of None members will add some tracks.

With this, I’m proud to grow as a musician by adding many dimensions. If Envy of None is just one aspect of my musical universe, I feel I have much more to share and explore. My door is wide open, and I seek to explore myself as a musician and songwriter in different musical genres. I don’t want to put myself in a box and to make more music and try new things. I hope the listeners stay with me on this journey [laughs].

Concerning your upcoming album, when is it supposed to be released?

I don’t have a fixed date, but it is for September. It will also follow a small tour. Musically speaking, the album is a far cry from Envy of None. But there are some musical crossovers.

Well, Maiah, this was my last question. I hope you enjoyed my interview. Usually, this is the space for the artist for its conclusive words.

Thank you. I did. Once again, thank you so much for having me, Miriam. And, for being a great interviewer. I hope the readers will enjoy it. Just hang in there.