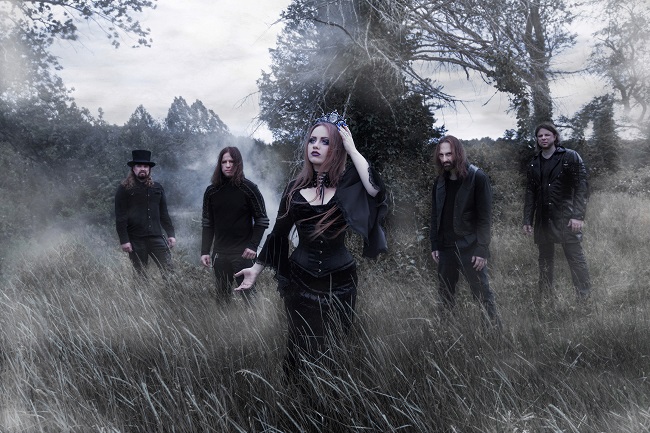 Sometimes life’s path doesn’t follow what it should be prescribed, or better, what it looks like. Consequently, what’s the only solution possible is to manage and come out with some new improvement. Try to imagine the butterfly that turns into a chrysalis and then, into a caterpillar. Essentially, this is what happened to New York’s symphonic metal band Everdawn who previously were known through the moniker of Midnight Eternal. Now, this band is back with a brand new singer and a new full-length, “Cleopatra” via Sensory Records. Let’s know more about it together with Alina, the singer. Enjoy!

Hi Alina, welcome to Femme Metal Webzine. How are you and how life is treating you in these precarious days?

Hello Miriam! Hope all is well with you. “What doesn’t kill us, makes us stronger” has been my mantra throughout the pandemic. Everyone has been affected in some way, but I’m doing my best to keep a positive attitude and look at new opportunities for growth and development.

For our readers that are not familiar with Everdawn, would you mind introducing us how the band came together?

The original members of the band (Boris, Dan, Mike and Rich) were looking for a new singer in 2019. I’ve worked with Mike before on DiAmorte‘s “Red Opera” album, which was an awesome experience. We definitely clicked right away and had a great experience, so he suggested me to the rest of the guys. They sent me a few tracks to try out for them as an audition and they loved what they heard.

Just like that, I’m on a plane from Toronto to New Jersey and the rest is history. I’m so grateful having the chance to join the project and beyond the musical chemistry, they’re all great human beings. They made me feel very welcome from the very beginning and built a great foundation to move forward with.

Even if, you are not allowed to share any details, why Midnight Eternal re-christened themselves into Everdawn?

Everdawn is the unexpected evolution and upgrade from Midnight Eternal. Their former singer hacked into their social media accounts on her way out and basically held the public platform of the band hostage. The rest of the group tried everything they could to sort the situation out amicably, but the response wasn’t mutual.

The decision was made to avoid being dragged into that negative energy and move forward and focus on doing what musicians are supposed to do, making great music! All of the talent and passion of Midnight Eternal stays with us in our new incarnation.

On 5th February, it was released Everdawn‘s début album “Cleopatra” via Sensory Records. What would you like to share about its general production? When did you start to collect the first ideas for it?

The album was been already demoed out when I came into the band. So, I was working with the concepts and ideas already given to me. However, I love how everyone were open to listen to my interpretations of those ideas and putting my own spin on it as well as writing lyrics for a few songs.

“Cleopatra” offers an interesting conceptual work about this amazing Egyptian queen. Considering the historic period and her long royal hegemony, how much challenging was to structure all the available information?

“Cleopatra” is actually not a concept album per say. It is a one track title. We chose it because it best represented the band and our sound overall, however the songs are not related between each other and can be listened to in different order. The idea of a concept album about Cleo would actually be a cool idea, but her influence came through in different ways. When you’re incorporating one of the most powerful and influential women in history, it’s really something special.

Despite the circumstances, “Cleopatra” follows the self-titled début of Midnight Eternal. released back in 2016. Even though I’m aware that the core members are still part of the current formation, in your opinion which is the main link between these two releases?

For the fans of Midnight Eternal, everything that made their debut album special is there. The tone is a little bit heavier and there’s a maturity that develops naturally just working together longer, but the unique talents of each member are unmistakable.

The incredible guitar skills of Richard are shining through with his clean crystal tone on both records, as well as Boris‘s amazing synth tones, which you can’t just mistake with anyone else, Mike‘s phenomenal writing on bass, and of course our Dan, beast of a drummer, who’s like a machine can’t be beat: that same speed and intensity on both records.

Almost 1 month ago, it was premiered the single “Stranded in Bangalore”. Why the band opt for this song and which is the connection between Cleopatra’s main theme embedded in this release?

We felt it was important for us to have a solid hook for a lead single. It’s a radio friendly track that’s approachable for those who might not necessarily be metalheads and draw them into the rest of our work. That catchiness is something that we foresee really working for us when we’re able to perform live again. The chorus is something that people can sing along to and having that bond with the audience is such a rewarding part of what we do.

Another factor in that decision was our desire to give a nod to India, the title of the track referencing one of their largest cities might be a giveaway there. They have such a huge and vibrant metal community that sometimes doesn’t get the recognition it deserves on the global stage. That little nod of appreciation for their support and influence on the music we make is something that mattered a lot for us.

The song “Your Majesty Sadness” sees the participation on Therion‘s Thomas Vikstrom on vocals. How this collaboration born?

That’s a collaboration we all have to thank Dan for bring it together. Midnight Eternal was on tour in Europe supporting Therion and he became really good buddies with Thomas. After the tour ended, he invited Thomas to work with the band in the future. Thomas was excited to collaborate and now we have this beautiful duet, that we’re very proud of.

For our readers that are still not familiar with you, Alina, how your musical journey started? What would like to share about your artistic background?

My musical journey has started since I was 6 and went to study piano back in Kamchatka, Russia before I immigrated to Canada in 2011. By the age of 24 I have acquired quite an experience in both metal and classical world, so it is hard to narrow it down, as every musical experience has led me closer to my dreams and developed me into a singer I am today. However I shall say that I have a university degree in classical voice.

I am a professionally trained soprano and have been studying voice with active opera singers and incredible professors. Aside of singing solo, I have sung in choirs of all kinds: classical, church, chamber, and professional choirs for 16 consecutive years. And only the passed 2 years I have stopped due to the lack of time and shifted focus to my work within the metal genre.

What the future holds for Everdawn?

Our next step is creating a music video for “Cleopatra” sometime this year (fingers crossed). We’re in a bit of a unique situation right now, as the restrictions on the border separating my bandmates and I has slowed that down. That being said, we’re accepting the challenge and have already started working on a second album.

There’s a lot of excitement helping fuel our creative energy, as we can’t wait to perform “Cleopatra” live and get to build amazing memories and meet wonderful people on the way. No doubt the best is yet to come for Everdawn.

So, Alina, we’re almost at the end and with this please be free to say hi to your fans and your readers. Thank you so much for this interview.

I am very excited for anyone who has yet to grab yourself a copy of “Cleopatra” and hope you have a great time listening to our record. We’ve put so much passion into this project and I’m positive that listeners will feel the same love we did recording it.

If you like what you hear and want to follow us on social media, we’ve made it very easy. We’re “@EverdawnOfficial” on Instagram, Facebook and Youtube, as well as multiple streaming platforms. We really appreciate everyone who supports us as that’s what keeps the music we all love going. Be safe out there and rock on! \m/