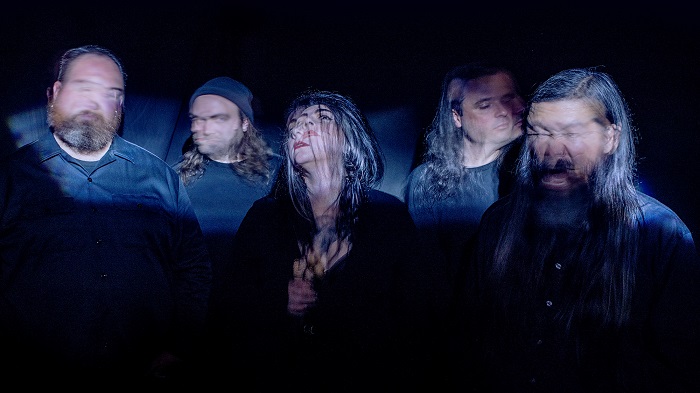 Strong of their new record deal with Prophecy Productions US, the Avant-garde Doom/Post-Black Metal band Eye of Nix is back with their third album “Ligeia”. Even if, the title’s name album refers to the enticing Greek siren, the title per se has a much deeper meaning whose final goal is to lead their listeners to a exciting, difficult and complicated emotional journey through lyrical thematics of obsession, trepidation, addiction, and illusion. For learning more about it, we have inquired the singer Joy Von Spain. Enjoy!

Hi Joy, welcome back to Femme Metal Webzine, how are you and these precarious days are treating you?

Hello to you Miriam, hoping you are well- I am glad to be speaking with you once again! I have my health, which is a good thing these days. Staying busy and staying connected.

Back in June 2020, Eye of Nix released their third full-length “Ligeia”, what can you share about its general production?

“Ligeia” came into being with a slightly new lineup for the band – and some incredible contributions from our new rhythm section. In addition, I wrote and played guitar on this album in addition to Nicholas, and Masaaki has added keyboards to augment the melodic content overall. We looked for a more lush, atmospheric overall tone, and more guitar layering than on pervious recordings.

As per common knowledge, “Ligeia” is a Greek siren who “enticed humans to their demise”. How this mythological character intertwines with the lyrical themes contained inside it?

The siren myth tells how we can be swept up in a storm and dashed against the rocks, lured in by something that seems wonderful in the moment. In times like we have been living through, in pain or desperation, people seem predisposed psychologically susceptible to manipulative people, addictive substances, or dangerous pursuits. I’m not passing judgement on any of these things, and have lived long enough to know them well! But we can see how easily humans are enticed off course – it’s a universal phenomenon.

I view this album (and most of my albums) as being a sort of opera, but instead of an exact narrative, there is a general set of themes explored by different characters or viewpoints through several of the songs. “Tempest” speaks in the voice of a chorus member or narrator, a warning about Ligeia’s deadly nature. “Stranded” speaks in the voice of the wrecked and lost wanderer who’s been led astray. The title track is sung in the siren’s own voice, calling the enticement and reveling in the capture of her prey. “Adrift” reveal’s the wanderer’s lament on betrayal and isolation, finally ending in the rambling madness of “Stone & Fury”.

In the press release, you stated about “Ligeia”: “any moment could be the last we experience as ourselves is an endless sea of inspiration.”. What specifically do you refer to?

As a young lady I lived very fast and didn’t expect to live long. So many things can cut the life short, or change our bodies – or minds – drastically, so much so that we could cease to be “ourselves”. We are all just barely outrunning death and this drives me. When I awaken I already regret that there isn’t enough time. We have so much art to create and experiences to live, there is no use throwing it away on distractions and drudgery…

If for “Black Somnia” you chose to work with both Billy Anderson as a producer and Brad Boatright for the mastering process, this time, you were assisted by Michael Zech throughout the engineering and the production and it was mastered by James Plotkin. If compared to “Black Somnia”, what did you learn throughout these processes and how Michael Zech and James Plotkin helped you out?

I had an excellent time working with Billy last time, and James too. We learn an immense amount from every recording experience! It was simply a totally different experience in the studio this time, because of many factors. We had more studio time, we had a different lineup, we wrote more technically challenging songs and were looking for a different tone.

For this set of songs we had the opportunity to work with Michael and this was really exciting in the wake of The Ruins of Beverast’s “Exuvia”, which we loved. He insisted on the best performances from us, but in a way that kept it fun. The dynamic range of the album called for Plotkin’s specific skill set too, and together they totally nailed it.

Out of “Ligeia”, there were two singles, namely “Concealing Waters” and “Pursued”. Besides offering my honest compliments for how they were produced, in truth, what this waters are concealing? And by what are you “pursued”?

Thank you so much or the compliments, these songs are very dear to me and it is kind of you to say. “Concealing Waters” is a poem on the horrors of memory, the desire to wash away the past, to drink deeply from the mythical river Lethe, forget, quench the terrible path we’re treading, which feels as though it may lead to a world engulfed in flames.

Do we welcome the water, or the flames? “Pursued” is dedicated to a dear friend who just recently passed away. When she first became ill, she said she wished she’d led a hedonistic life; that it was now too late to enjoy the excesses life has to offer. Death is chasing us down, and from another direction calling to us at the same time. We are always just barely in the middle.

Additionally, would you mind to offer a quick recap about the making of both videos?

“Concealing Waters” was a seamless and inspiring collaboration between Anima Nocturna, Joseph Seuferling, and myself. We invited butoh dance artist Helen Thorsen, musician and painter Anne K. O’Neill to become the Wanders, represented in younger and later years.

We chose a few lush and verdant locations outside Seattle and Bellingham to film at the height of summer, including the Snoqualmie River and Lake Samish. Props and pieces for the memory-gown came from my own childhood, and from our families. With A.N. as art director, props master and makeup artist I feel the project was a great success!

We shot some great-looking footage for “Pursued” with Joseph in February, and planned two more shoots with actors/dancers in April. But, the Covid lockdown began March 16th here and halted all gatherings. Still wanting to maintain our release timeline, Masaaki, Zach and I created some additional footage. The end result was more of a performance-based video – but, I am glad that we were able to complete the work even if it was quite different from the origianl plan.

Among the several formats in which “Ligeia” was released, there’s one of which I caught my attention and it’s the 2 CD Book edition. Would you like to tell us more about the book?

Absolutely! We’re so pleased with how this one turned out, it’s really beautiful. This special Luxus edition of the release features a 72-page hardcover art book with gold hot foil inlay. There’s expanded artwork from the album & band photos by Anima Nocturna, as well as stills from the video for “Concealing Waters” which was directed by Joseph Seuferling. This edition has a 2nd disc with covers, remixes, and re-imaginings of the songs on “Ligeia”.

There is a voice/piano/acoustic guitar version of “Adrift”, a neo-folk version of “Tempest” by Wickt (Nicholas’s side project), and a neo-classical/death industrial version of “Stranded” by To End It All, which is the duo of Masaaki and myself. Zach created a dark ambient piece around themes from “Pursued”, and Luke created an all-synth version of “Keres”. Our friend Michael Hensley (Blood Box) created a massive dark ambient/environmental remix of “Stone and Fury” as well. We’re so thankful that Prophecy has been supportive in our creativity for the visual aspect of this album, in addition to the musical aspect!

In normal times, this question doesn’t procure any embarrassment but I feel anyway obliged to ask you if you had any plans to promote live “Ligeia” and instead, how your plans changed?

We were looking at beginning some tour plans back in March, and then this idea has been shelved for the time being. Sadly the situation here has become quite grim this summer with a lack of controlling Covid-19, so all responsible states have banned live shows.

Now we hope that eventually when tours can again happen, enough venues will still be operational to support live music for up-and-coming bands. If travel bans were lifted, it seems possible that we would be able to go to EU or Mexico than tour the States any time soon. Hard to say.

So, Joy, we’re almost at the end and with this please be free to say hi to your fans and your readers. Thank you so much for this interview.

I’d love to say hello to all of you reading this, and that we sincerely hope to play for you live in the EU as soon as possible. Much thanks!