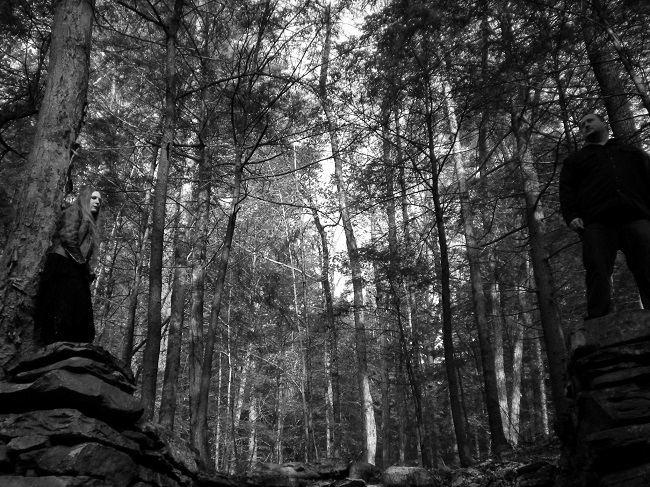 Following the steps of the best Norwegian black metal bands, Massachusetts’s Forever Autumn blends the best musical peculiarities of that genre together with doom metal and acoustic nuances.

In light of the new EP release, “Hail the Forest Dark”, we had a chat with Autumn Ni Dubhghaill, the mastermind behind this musical creature. Enjoy!

Hi Autumn, welcome to Femme Metal Webzine. How are you and how is this precarious period treating you?

Hails and Horns, as they say.  Thank you for having me.  I am well enough during this Grand Ridiculousness.  Would that it was behind us now but looks like we’ve still more to go.

Even if you have been active since 2000 with Forever Autumn, how did actually your musical adventure begin? Additionally, what did you learn so far as an artist?

I began with drumming in high school with my first well worn drum kit. I enjoyed that a lot but I wanted to be the front-woman, so I grabbed a cheap mic and a used guitar, and the rest is history. Everything I play is self-taught. Now I play a variety of instruments and use them in my art.

As an artist, I have learned that sometimes, you just must go it alone. Also, I have learned to work hard with little to no reward but it’s the hard work that bears fruit. Though I still struggle with a lot of the business-y and administrative aspects, social media included, I have a clear prospective of how the music industry works. On a last instance, it’s fine to ask for help and that there is a place for my work, albeit scattered across the world. Then, there’s a great deal of professionalism and professional courtesy, and I know that there is still much more to learn.

On Sept 3rd, your upcoming EP “Hail the Forest Dark” has been released. What can you tell us about its general production?

I am very excited about this new release. It is a milestone for Forever Autumn and a much-needed expression. As to process, this is the second record that I have recorded myself. My long time friend and musician Robby Baier and I did the mixing, and another first is having Jack Control of Enormous Door for the mastering.

This record was created during the quarantine and took many moons to complete. Indeed, I am quite pleased with the production because I have managed to capture a level of sound hitherto unknown to that earlier self with a duct-taped microphone and a broken amp.

In the press release, you mention that “Hail the Forest Dark” represents “a temporary departure from traditional Forever Autumn” sound. Musically speaking, which meaning holds for you this release?

I felt to be clear that “Hail the Forest Dark” is not a new direction for the band. We are not becoming a Black Metal band (though part of me would really like that). The concept of this record has been gestating for years and it’s only now It is only now that the proper time to write, record, and release it has come.

This record highlights the sometimes-hidden influence of Black and Doom Metal in my works. In future releases I do intend to incorporate more overt aspects of the two. “Hail the Forest Dark” comes at a time of great change both for self and the world and this record means a lot to me. It is very powerful, and possibly more revealing than some of my previous one.

The song “‘Listless Pacing’s of the Haunt” features My Dying Bride‘s mastermind Aaron Stainthorpe. How was this collaboration born? And, why did you choose this specific song for his featuring?

Aaron appears on all three songs, most prominently in the third song “The Firmament in Absence”. We have been good friends for a long time and while we were talking about the previous album “Howls in the Forest at Dusk”, he really appreciated some things from it. Indeed, his comments were quite nice.

During the time I was writing the EP, the suitable part for Aaron‘s voice magically appeared. So, I asked him if he’d like to be involved and here’s the final outcome. It was fun to work together and maybe we’ll do so again in the future. On a personal level, I am just thankful that we’re such good friends.

Back in 2019 Forever Autumn has released its 4th full-length “Howls in the Forest at Dusk”. What can you recall about its overall production? So far, which feedback did it generate from the press?

As above stated, “Hail the Forest Dark” is the second record that I recorded myself while the first one was “Howls in the Forest at Dusk”. Indeed, the production is quite very similar because the same people were involved. So, Robby Baier did the mixing, but Will Schillinger of Pilot Recording Studios had done the mastering.

I’m still amazed for the great achievement and I’m still very pleased with it. So far, “Hail the Forest Dark” has had much more press but “Howls…” did quite well too. Indeed, our little bit in Zero Tolerance Magazine was probably the height of its success. Though it initially was released to CD in 2019, “Howls…” was meant to be a vinyl record. It was not until earlier this year that I could finally afford to realize that vision. It had been a long-time dream to release my work on vinyl, and now I’ve done two!

Indeed, I know that you can play several instruments. Which is your musical formation/education?

In truth, I have no formal background in music. I cannot read nor write so, everything is by ear and feel. This is probably what lends an organic touch to my work, the warp and weft of my natural rhythms. However, I took a piano class once in college, but I believe I failed out of it. It is important to me to be able to feel where it goes. Sometimes I just need to let it flow where it wants. I suppose we work together in that way.

Firstly, I am looking forward to the release of “Hail the Forest Dark”. On the other side, I do miss performing and I hope that we can all get back to that sooner. For instance, I did plan an outdoor performance by a local waterfall. Ultimately, the fickle gods of bureaucracy set forth a deluge of red tape and hefty fees and I had to stop everything.

Of course, there are more plans such as writing work for the next album which will be more a mix between “Howls in the Forest at Dusk” and “Hail the Forest Dark”.  Additionally, I’d like to re-work some of the old demo material by giving it a contemporary perspective. Also, I have plans for my visual works as well as I plan on writing a few proposals to show my new series, also created during pandemic, intended for some of the major modern art museums.

So, Autumn, we’re almost at the end. Please be free to say hi to your fans and listeners. Thank you so much for this interview.

Hello friends, fans, and listeners, my records are out now in strictly numbered editions so be sure to order yours.  Thank you, Femme Metal, for this interview. It’s an honor to help women in Metal everywhere.