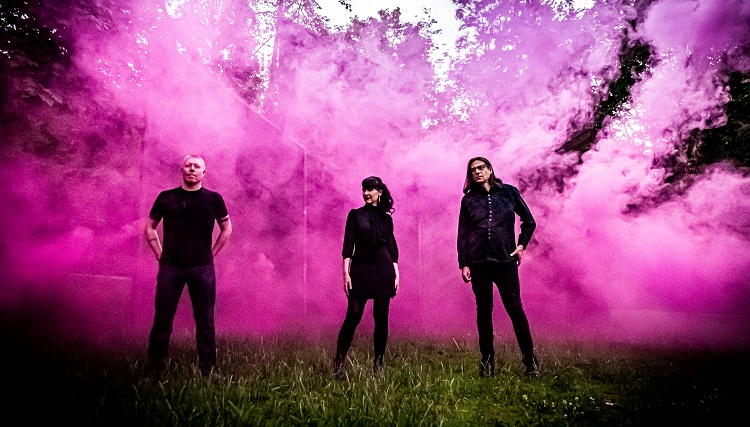 Behind the moniker Fotoform, we can find 3 veterans of the post-punk and shoegaze scene. After concluding their musical experience with C’est la Mort, long time collaborators and couple Kim House and Geoffrey Cox are back with Fotoform.

With this new formation which features former Death Cab for Cutie/Long Winters drummer Michael Schorr, the band will release its upcoming second LP “Horizions” via Dismal Nitch. Let’s learn more about it, enjoy it!

Hi Kim and Geoffrey, welcome to Femme Metal Webzine. How are you? And how are these precarious times treating you?

Kim: Happy to be here. Thanks for having us. Precarious times indeed. We are hanging in, thankful to all be healthy and doing our best to navigate the ever-shifting circumstances of the pandemic.

For those who are not familiar with Fotoform, would you like to introduce our readers how did you get together?

Geoff: Kim and I have always been really involved in the music scene in Seattle, and I was the roadie for her first band, which she left when we moved to Germany. We formed C’est la Mort with a couple of her old bandmates when we returned to Seattle. After a few line-up changes and one album, we changed the name to Fotoform before releasing our last record.

I know that Fotoform is a reincarnation of your previous band C’est La Mort. What has led to that? And what did you learn from that experience?

Geoff: We really loved being in C’est la Mort, but we wanted to rethink how we were approaching things. Kim and I had played in C’est la Mort with several people and so many different line-ups (four guitar players, five or more drummers) over the years – and we were ready to turn the page.

We’d also tired of having to repeatedly spell the name and explain the meaning (“C’est la vie, such is life; c’est la mort, such is death”). So, we came up with another band name (not an easy thing!), and even though it’s still foreign (German this time), hopefully this one is easier to pronounce and remember.

In October, you will release your second full-length “Horizons”. What insights can you share about its production?

Kim: Production for “Horizons” started with us going into the studio to record a track for an upcoming split single with Savage Republic just before lockdown in March 2020. We figured we would also demo a couple songs we had just written with the new line-up while we were in the studio. I don’t think any of us could have anticipated how 2020 would unfold, or that it would be a full year before we’d be able to get back to recording.

We’re thankful we laid down a couple songs before everything fell apart. It gave us a foundation to work from as we continued writing and swapping files back and forth during lockdown. We went back into the studio in May of this year after we had all been vaccinated. It felt so amazing and cathartic to be in the studio again. To bring the new songs to life and just be in the same room together.

“Horizons” features the new band member, the drummer Michael Schorr. How did he join the band? And how this has impacted on the general sound of the band?

Geoff: Michael‘s a solid and inventive drummer, and we all have the same touchstones for influences, sharing a common vocabulary, in a sense. Michael and I played together for a couple of benefit/covers shows (doing some Cure and Joy Division songs for one and as a super-last-minute Jawbox tribute for a Dischord cover night), and we were excited to play with him after our previous drummer moved.

Michael brings some amazing sounds and flavors. It was easy to collaborate with him remotely when we were all in lockdown. As Kim mentioned earlier, we spent much of the last year sending files back and forth for the new songs and Michael‘s been great in that process. We wrote and demoed much of the record at home this time, and Kim started playing more with keyboards and synths, which adds another dimension.

The album is aptly named “Horizons.” What meaning does hold for you?

Kim: These past couple years have been full of transition, growth, trauma, hardship. I vividly remember toasting to a “better year” NYE of 2020. Little did we know. 2019 saw a career transition for me, Geoff had a major skateboarding accident, we lost our sweet 16-year-old dog, our house flooded, and my dad started having health issues.

Then 2020 came and with it the pandemic and all its ensuing hardships, and the unexpected death of my dad from a stroke. The loss of my dad and having both parents gone has left me feeling unmoored in ways I wouldn’t have anticipated. Indeed, grieving / dealing with my dad’s death in the height of isolation of the pandemic was a soul shifting experience.

The concept of “Horizons” symbolizes “keeping your eye on the horizon”, which has been sort of a mantra for me; hold steady, breathe. For me “Horizons” also evokes the cyclicity of nature, ebb and flow, birth, and rebirth.

I also think about the sort of mirage-like effect that happens when watching the sun set or rise on the horizon – the ethereality of it, that mystic quality which is so magnetic. Distant yet intimate, a personal yet globally shared experience; ever shifting but also constant. Familiar yet vastly different with each cycle.

2017 marks the released of your debut-album. Which differences can you find between them?

Kim: We’re a three piece now, which has really affected our process and our sound. As a four piece with two guitars, bass and drums our Fotoform debut album was a wall and wash of guitars.

We now have more space to play with. We have layered in synths on this album but have also enjoyed leveraging space more in our dynamic which has been powerful. The interweaving guitars are still present thanks to Geoff (and one guitar cameo by me in “Too Late”) but this album just feels more nuanced and angular somehow. To us “Horizons feels intimate and pointed: unflinching, open, vulnerable, raw. Its penetrating gaze looks you right in the eye.

Geoff: We also approached this album somewhat differently. The previous record was a document of what we were doing as a live band (and most of it was recorded live). This time – and this may sound like a cliché – we approach it as an “album”, a thing unto itself, rather than a representation of what we were doing on stage or in the practice space. In fact, we hadn’t even played some of the new songs all together as a band until after recording.

It was a change in perspective. From recreating what we were already doing to figuring out what a particular song needs or wants. For example, that could be adding some piano or an e-bow or even me not playing for a bit.

Despite the pandemic, what is in the pipeline for the band? What are you most looking forward to? And what is next for the band?

Kim: We are really looking forward to playing live again. We couldn’t play shows this summer due to injury, but we have a few shows booked this fall. Under the circumstances it’s difficult to say if those shows will happen. We are really looking forward to getting back to it and plan to make it back over to Europe. As well as, some extended dates in the US once everything has stabilized a bit.

We are continuing to write and have almost enough material for another album. Music has been such a saving grace this past year, as always. We’re so thankful to have an outlet. An escape with which we are able to communicate through music in ways that transcend language alone. Thank you so much for this interview!

Kim & Geoff: Thank you for having us!