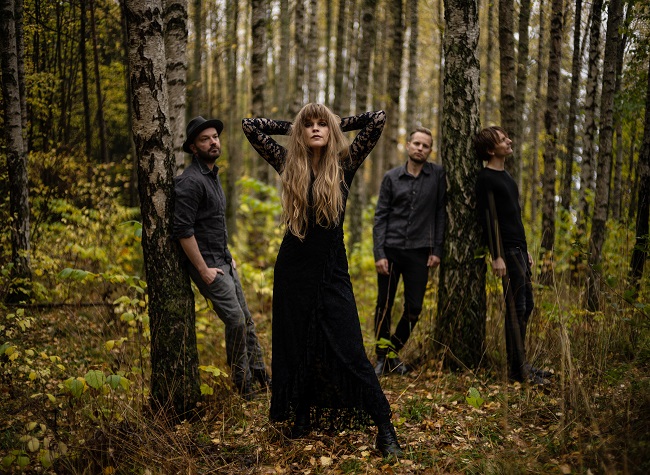 In terms of folk music and portraying to ancient tales, the Norwegian progressive art-rockers Gåte are THE musical institution. And their last release represents a dip into the band’s acoustic facade.

Discover with us this well-treasured musical gem from the deep North through our interview with the singer Gunnhild Sundli.

Hi Gunnhild, welcome to Femme Metal Webzine; I’m happy to host you today; how are you? And how these precarious times are treating you?

Hi, I am well, thanks for asking; I try to make the best out of it.

Even if Gåte dates back its inception to 1999, would you mind recalling to our readers how this musical adventure started?

It all started with my brother Sveinung and me singing and playing music together. We grow up with parents who were deeply interested in Norwegian folk music which became a natural part of our musical upbringing. Our parents taught us traditional fiddle playing, and gradually I started to learn to kvede (a traditional Norwegian way of singing.)

During his teens, Sveinung become interested in modern music and started to play with synthesizers and musical programming. One time the Swedish folk rock band Garmarna asked me to warm up for them, I brought Sveinung with me. And we had the first performance where we did a fusion of traditional folk songs, musical programming, and synth. That was a performance with some key people in the hall, who soon became very important for Gåte‘s future. Their presence would help Gåte become a band with a clear path. A band that would tour; and rapidly grasp the attention of a broad audience.

Your EP “Til Nord” dates back to 2021; that followed the full-length “Nord” released in December via Indie Recordings. What can you share about the production of “Til Nord?” And which is the connection that the EP shares with “Nord?”

We never planned to do an entire album within this more acoustic soundscape. Our original plan was to set up a series of acoustic concerts featuring cleaner and simpler versions of some of our songs. With the full-scale Gåte, we need a big production around us to make the concerts possible. For this occasion, our idea was to scale things down. And make it easier for us to travel with small-scale production. By giving us the freedom to play more shows and deliver more intimate performances. We should have gone on tour with this setup in spring 2020. But we only managed to do one concert before the pandemic hit. We had to cancel the entire tour.

Luckily, this acoustic production was a corona-friendly concert; it allowed us to perform several gigs. Initially, it was intended as a small side-project. Then it got a life of its own with a much longer lifespan than we had ever planned. The project allowed us to delve further into and explore our acoustic possibilities. And we soon became happier and happier doing these concerts. The reception of our down-scaled version of Gåte was also positive, which motivated us to make a record. The exploring process of their live potential before recording them was also a very positive one. And I believe it has put its mark on the record.

Indeed, “Nord”‘s release was at the beginning of December. It concludes an era for the band; what do you mean by that?; and why?

As previously mentioned, “Nord” was meant just as a side-project for us and not the beginning of something new. However, when Nord was released, we felt the album release finalized the project and marked a natural end. But Nord being Nord, it keeps on living a life of its own. And our statement might not be as conclusive as we felt it back in December. Its acoustic soundscape made an impact, and it will continue to be part of Gåte in some way or another. In addition to all the other aspects of our music that we seek to explore and develop.

From what I recall, the last full-length “Svevn” dates back to 2017. If compared with “Nord”, what your previous album is different from?

Gåte is deeply rooted in folk music and folklore. It is in our DNA and has paved the way for all our musical outputs. We call ourselves folklorists and see ourselves as vanguards of folklore. Gåte‘s goal is to convey and further this often-forgotten folk tradition.

And showcase the beauty and strength hidden in its stories, songs, ballads, legends, myths, etc. Our music has always been innovative, groundbreaking, and different. It is rooted in cultural heritage and our musical tradition, without following the traditional rules and formulas. With “Nord”, Gåte became a creator in this tradition.

Together with the acoustic expression and through a cleaner and simpler soundscape, we have tried to create something we hope seems even more authentic. And beckoning people to join us in this journey back to the very roots of the vast Nordic folk tradition.

Through this approach, Gåte also opened new doors and helped us see the music from a different stance. We felt we got even closer to defining our musical DNA and dared to expose ourselves and our instruments. Gåte has always been a force – using all means possible, maximizing the esthetics, and exaggerating everything. For this occasion, we wanted to peel everything down to the core. And see what lay beneath all the extravagance: “Nord” is the result of this process.

Every record produced and released brings a lesson learned. Musically and personally, what is the most fundamental life lesson Gåte has gained from “Nord?”

It has been a great learning experience. We have learned that we can afford to be more open to the music and the directions it takes us. Our essence and DNA will prevail and shine through regardless of which path our music leads to. Or what genre we choose to explore.

One of Gåte‘s traditions is to lyrically dive into the vast traditional Norwegian musical repertoire by offering captivating and emotional recondition. What can you tell me about the lyrics featured on “Nord”?

Most of Gåte’s songs are our take on traditional Norwegian folk songs; this is also the case with “Nord”. The themes vary, but some of them we often find is the agony of forbidden and lost love, life and death, and old myths and legends. The album booklet also features a text about each song – a little gift to all our fans who buy physical products.

Despite the pandemic, what is in the pipeline? Which is the thing that you are looking forward to? And which are your plans?

We are hoping to do tours and concerts outside of Norway again. And looking forward to working with new music and towards a new album.

So, Gunnhild, we’re almost at the end. Please be free to say hi to your fans and listeners. Thank you so much for this interview.

Thank you for the interview! And thanks to all the listeners and fans for their support. I hope you will continue to follow us on our musical journey!