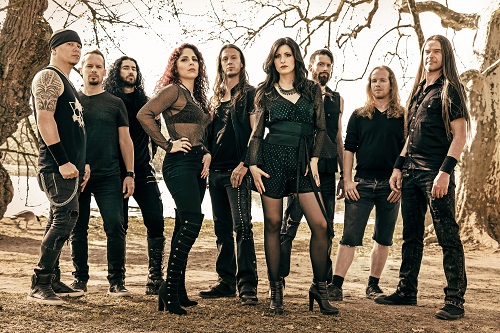 In occasion of their special tour here in the Netherlands, I got the chance to interview George Oosthoek from MaYan in Eindhoven before their show at the prestigious Dynamo. Although he was a bit sick, the grunter sat with us to delve into their latest release “Dhyana” released back in 2018 via Nuclear Blast. Remember when I said ‘special’, well is it like Game of Thrones in a way, no spoilers. So, enjoy it.

So, welcome back (read our previous interview here) to Femme Metal Webzine. How are you?

A bit tired but lately, we had a lot of gigs…

So, were you there for the show at the Neushoorn in Leeuwarden on 8th February?

How MaYan did came up with the idea to add to their normal setlist, a special one dedicated to other related bands?

Because it’s just a waste not to play those songs and also we have a rich musical history. I mean, a lot of members of MaYan have played or are playing in really cool bands and why does not play those classic songs? And people ask me all the time “when there is gonna be an Orphanage reunion”? But, well… not very soon for me [laughs]

[laughs] Let’s have a coming out, you would like, yeah?

It would be fun. It would be fun, of course, but this is the best thing and also I love to play with these guys and girls. It’s so much fun being on stage with them and we come over with the idea…

Do you have any idea to bring this classic set even outside The Netherlands?

You have to do it! {laughs}

Yeah, it was also fun to play them and the audience just love it and in addition, we also love it!

We must not to forget the fact that that MaYan around November has released a new album “Dhyana”. When did you start collecting the first ideas for it and what you say about its genesis?

Well, Mark [Jansen] started the whole idea for the lyrics, he’s the main man [laughs]. He was reading about this writer and his vision in life, how to cope with certain things and he got inspired by him too. Then, we started writing together and usually, I start writing with Frank at his home studio and subsequently, we just start to listen to music, start creating and get inspired by it. Later, we start jamming, recording and we send it to the rest of the band, so they use it as a piece of the puzzle and then they send it back…

Coordination is the rule, here…

Because it works as a democracy and it’s really cool. You can create cool ideas and some ideas might not get used which they can turn into leftovers for the next album. There are always a lot of creative ideas, yeah.

I mean, we are a lot of band members that equals a lot of ideas…

Let me get straight, MaYan is composed by 10 members, right?

Usually, we are 10 members on stage, yes but right now, we have some family members on the bench because Arjan [Rijnen, former ReVamp guitarist] tonight, which joined us for the European tour last year and he participated in the release shows, will join us for both the normal and the classical set which it can sound a problem or maybe is the strength of this band.

How do you manage to keep up with the band’s alchemy? Because you have previously told me that MaYan is a democracy and sometimes, it’s possible to not agree on everything…

I also learned that there was the involvement of the City of Prague Philharmonic Orchestra, how was working with them and its consequent experience?

I haven’t worked personally because I wasn’t present during their recordings but everybody knows about their work and their reputation. I come across them thanks Dimmu Borgir’s “Death Cult Armageddon” which is, in effect, one of my favorite albums. It’s just amazing. There is such a difference when an orchestra come out of a box and when compared to a real orchestra, it’s just fantastic…

However this option involves a lot of costs…

Yeah, a lot of costs and also you have to write the music on paper, transcribe the arrangements which both Jack [Driessen] and Joost [van der Broek] did take care of. They went together in Prague whose the recording only the orchestra took half a day and that can be easily quite an expensive costs to handle alone itself….

…which was completely founded by the fans through crowdfunding, right?

Nowadays, this crowdfunding system are sparking a little bit of critics because…

Yes, and I understand it also, of course. Though, people have to understand that making music is really costly and I’m not a full-time musician and I cannot living by earning money with music. It’s just my passion and also for a band like us because we are a big band.

Yeah, there are a lot of expenses affected…

In addition, we have a crew that works for us which includes a lot of equipment and stuff.

I can imagine when you are touring, hypothetically on an European tour, I think you have to rent a tour bus and a medium size lorry so…

So, I’m not a rich man because of the music [laughs] but it’s my passion…

Do you mind to you tell me more about the lyrics contained on “Dhyana”?

As a matter of fact, I wrote a song called “Rebirth From Despair” based on my own experience which relates directly with the passing of both my parents that happened 2 years ago.

Yeah, that’s life I guess. It’s pretty rough because within 1 year I lost both my parents and it does something to you. As result of this event, I’ve completely started to look at my life in a different way. I’ve began to realize what is important in life and you can always worry about certain things but then, in that specific time you know what is important. It really turns your world upside down, anyway it’s good as long as is about life and I’m sure that everybody has a moment like this in their life where something similar my event can happen. It’s beneficial to transform it into something positive. Of course, I miss my parents but I do cherish all the good things they gave me and for that experience, it comes “Rebirth From Despair”.

I can fully comprehend how much painful can it be to talk about it and I really thank you for sharing this so openly with me.

I don’t mind talking about it, considering all it’s part of my life and I really understand why some other people don’t’ want to talk about this particular kind of things. Although speaking about it, it did helped me a lot and write about is a way to cope with it.

There is this new singer, Adam Denninger and I have absolutely any clue about it.

Mark knew him during the last American tour in the US. He’s a really versatile singer and he can do a lot of his voice.

Is Henning [Basse] still a member of the band?

Well, Henning from now on will perform as a guest due to its commitments with projects such as Firewind and it was really hard for him to combine everything. Consequently, we had to do a choice.

Last year with “Dhyana”, it was released a special EP called “Undercurrent”. What is it about and how this EP relates to “Dhyana”?

It was an extra perk related to the crowdfunding and it still available at our shows. Of course, if your were of one the contributors, you would been the first to listen to it. It was recorded on the same session as “Dhyana” and it does includes one of the song that I’ve written: “Eradicate the Colonies” which strictly politics related. It’s about people who follow blindly certain leaders or they get blinded by their power.

So, George, I really thank you for this interview and please be free to say hi to your fans and our readers in the way you want.

I want to thank all the readers and the MaYan fans for all the support. It’s really appreciated and I would love to see you all in tour for a nice chat and just rock out at our concerts. And together one or two beers together.