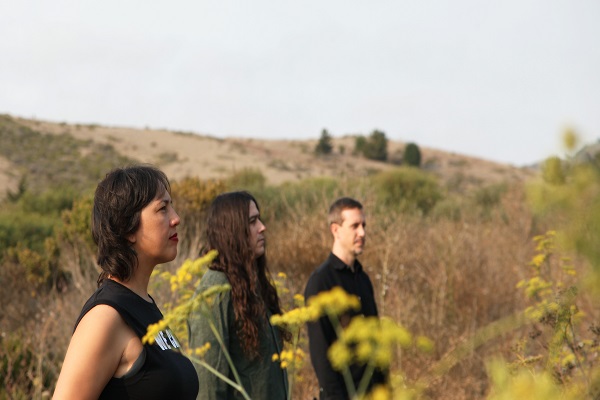 San Francisco based progressive metallers Grayceon have been always the forerunners of the most experimental side of this varied and important musical genre. Now, in December 2020, the band has released its fifth album “MOTHERS WEAVERS VULTURES” via Transition Loss Records. In this new LP, the trio keeps with its musical tradition by adding an element in the lyrics that offer also some food for thought. Let’s discover together more with the singer and cellist Jackie Perez-Gratz about this amazing release.

Hi Jackie, welcome back to Femme Metal Webzine. How are you and how life is treating you in these precarious days?

Hi and thank you for having me back! I am well, all things considered. California is still on somewhat of a lockdown and my family has been working and attending school from home since March. So, we’re going more than a little stir crazy but we’re hanging in and making the best of what we have!

On December 18th, it will be released via Translation Loss Records, Grayceon‘s full length “MOTHERS WEAVERS VULTURES”. What would you like to share about its general production? When did you start to collect the first ideas for it?

About a year after my youngest daughter Pepper was born, Grayceon re-grouped and finished the recording of our previous album, “IV”. We had written the majority of that album many years prior so the material was relatively ‘old’ at the time of its release. We started collecting ideas and writing for “MOTHERS WEAVERS VULTURES” immediately after we were done with “IV”, which was in late 2017. So, these past two years were spent working on the new material and we went into the studio to record it in January 2020.

Typically, we are always guided away from releasing new material around the holidays because November through February are considered bad months to release an album. But we figured, everyone is having such a strange year and so many artists and content creators have been delaying releases until the pandemic is over, why not release our album as soon as possible, even if it’s an unlikely time? It just didn’t make sense for us to wait until next year to release it.

Considering the title album, how can “MOTHERS WEAVERS VULTURES” be so tragically relevant in today’s current situation?

Thematically, the album is about the climate crisis and the beginning of the end of humanity as we know it. These themes were relevant and in the forefront of our minds when we wrote the songs over the last two years. We had no idea the album would be thematically on point in today’s apocalyptic landscape, but it is. It’s, actually, quite unfortunate because we would obviously not want the world to see it’s demise but it sure feels like that’s where we’re heading, doesn’t it?

If we consider your previous album “IV”, which are the main differences that distinguish “IV” from the upcoming one?

The main differences between the two albums is that “IV”‘s songs are structured more like traditional rock songs. Well, at least a lot more so than most of Grayceon‘s catalog. Also, between our previous “All We Destroy” and “IV” we had a 4 years-break between writing the music and writing the lyrics, which is quite unusual for Grayceon. However, “MOTHERS WEAVERS VULTURES” came out of us much easier, much faster, and with much more precision. I mean, we always go back and forth with arranging the songs in a specific way, but this album knew what it wanted to be. So, we are just guardians of the songs, if that does makes any sense.

We don’t care if we hit a musical ‘target’ or not. We never consider omitting a riff or a lyric because it may not sound metal enough or doom enough or thrash enough. So, we include all our ideas and can transition between ‘heavy’ and ‘not heavy’ very easily. Some metalheads think we are not metal enough, some they think we are too metal.

Of which is one of the reasons we don’t care. One can never expect to make all people happy, so why bother? I have always thought it was funny that us letting ourselves be free while writing is considered ‘challenging’ anything, because those two ideas are in opposition of each other, right?

Out of “MOTHERS WEAVERS VULTURES”, it was released the song “This Bed”. Would you like to offer us an overview about it?

“This Bed” is a song about betrayal and deception. It is written in a way that can be interpreted as a lover’s fight, but it is more about the betrayal of humanity in our relationship with Mother Nature.

For this album, you have collaborated with Jack Shirley at Oakland’s The Atomic Garden for both recording, mixing and mastering. How was working with him and this time, which is the main lesson that you have learned from this experience?

Everything that Grayceon has ever recorded has been with Jack Shirley. He tracked our demo the first year while we were a band in his parent’s garage. And now, after all these years, he recorded “MOTHERS WEAVERS VULTURES” in his brand new state of the art recording studio. We trust Jack.

He knows us and he knows our music. He truly is a fourth member of our band and we love him, he is like family to us. He also remastered all of our previously released material up until “IV”, that is all being released to coincide with the release of the new album. The remasters sound really great- some of the albums needed it more than others – but what Jack has done is made our entire catalog sound cohesive and like it all belongs in the same catalog.

I would like to give a special mention to the meaningful yet cathartic cover album. How it does deeply connects with the lyrics inside and who’s the author of it?

The painter who created the cover is called Kevin Earl Taylor and we are totally in love with it! Actually, this chef d’oevre wasn’t commissioned directly for us, but when we changed the album title because in origin was titled differently, we saw that this painting was perfect. We wanted something organic, beautiful, yet a little gross or disconcerting at the same time. In the end, Kevin‘s chrysalis captures exactly that- a rebirth, a transition, but at the expense of the death of an old form.

Well, even if we do love to play festivals and have big album release shows we haven’t really been a touring band for over ten years now. Actually, this year we will likely be skipping all of that due to several reasons. For instance, Max works as a nurse in a hospital, so he is particularly vulnerable and also more risky to be around. We started practicing a few times at the end of the summer, though the whole pandemic going worse and seeing how hospitals are being overwhelmed with COVID-19 patients, we stopped meeting as a group.

We want to try to pick it up again as soon as we are able, but unfortunately, we are not sure of when that will be. As a matter of fact, we were supposed to play Terrofest in Seattle back in May 2020, but it was canceled and moved to May 2021. Due to the current situation, it even looks like that date might not happen. I think we will probably stay at home, stay safe, and try to keep our creative juices flowing through all of this. Maybe we’ll have another new album in a couple of years- who knows!

So, Jackie, we’re almost at the end and with this please be free to say hi to your fans and your readers. Thank you so much for this interview.

Thank you for the thoughtful questions and thank you to the fans and readers! Grayceon is so incredibly thankful that people are still listening and enjoying our music. We do not take it for granted that we are able to play, write, and record music when so much of the word is in complete chaos. Aren’t we the lucky ones?