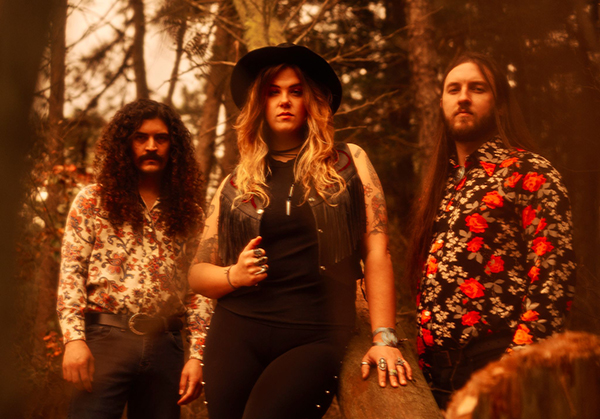 Despite casting incantations from 2012, Philadelphia-based psychedelic doom metal trio Heavy Temple has just released in 2021 their full-lenght “Lupi Amoris” via Prophecy Productions/Magnetic Eye Records. Indeed, in the title album, there’s something so enchanting and romantic at the same time. Wanna know more? Enjoy our chat!

Hello High Priestess NightHawk, how are you? And how these precarious days are treating you?

I’m good, all things considered. At the risk of sounding cliché, just taking things one day at a time.

Even if Heavy Temple has been casting incantations since 2012, little is known about its inception. would mind introduce the band and how the band began its adventure?

In the spring of 2012, my previous band had dissolved, and I felt very lost without the ability to play music, so I just started writing and recording some songs. I recruited the first line up and we recorded the self-titled.

Then we went through two more lineup changes before recording “Chassit”. With the last lineup, we toured a lot, but never got the chance to record. And that brings us to present day. The idea was always to have Heavy Temple be a revolving door of members, since things come up and life happens, but this most recent incarnation feels, to me, like the lineup I’ve always been looking for

After a long series of EPs, singles and one split, in 2021 it was released via Magnetic Eye Records/Prophecy Productions the debut “Lupi Amoris”. First, why did it take so much time to release your debut? Then, what can you recall about its general production?

As I mentioned in the previous question, we had quite a few line up changes. And with each new line up comes learning the songs and playing shows, so recording kind of moved to the back burner. The recording process for “Lupi Amoris” was actually very easy, and we were in the process of shopping it to labels when the pandemic happened.

Indeed, “Lupi Amoris” marks also the collaboration with Germany’s Prophecy Productions. How was the first approach with them? And so far, how is treating you?

It’s been great working with both the Prophecy team and Magnetic Eye. We had a lot of freedom with how we wanted to put out this record, and they’ve been very easy to communicate with. We feel supported on all fronts and we can’t wait to put out more music together.

“Lupi Amoris” is Latin for “Wolves of Love”. In truth, what is the main lyrical “concept” of this album?

Well, it’s really about finding someone, falling in love, the rituals of courtship. I usually write lyrics last, but these sort of came together naturally over the years of writing these songs. I named the album as something of a tribute to Kate Bush’s ‘Hounds of Love’ because it seemed fitting with the overarching theme of the album

It’s quite unusual that a band begins with an extensive tour activity before even published a full-length. How this feature impacted on the band? Throughout these experiences, what did you have learn?

It’s pretty wild actually, that people kept wanting to see us, despite having such a limited discography. It’s actually very flattering, and humbling. But I think the extensive touring really allowed to connect with a lot of people, so that by the time we released this album, we had a really supportive fan base.

Out of “Lupi Amoris”, there were released two singles “The Maiden” and “A Desert through the Trees”. What insight can you share about them?

“The Maiden” is complimentary to “The Wolf” but they started out as two different songs. We ultimately decided to release it as a single, and it’s a great standalone track, in my opinion. “A Desert Through the Trees” might be my favorite track on the album, and I think probably the newest of those songs. I was listening to a lot of Queens of the Stone Age at the time. Well, really all the time. But also quite a bit of early 90s grunge and sludge. And it’s the song we used for our very first music video as well!

Recently, you have played a streaming show in collaboration with Orange and Jam In The Van. It sounds overrated the upcoming question but, wasn’t a bit strange for a band such as Heavy Temple to play without a present audience? What are you thoughts about it?

It was certainly weird. We’d done a couple of other streaming events so we were a little used to it, but the energy is definitely different when it’s just you and the camera. We love playing to an audience, but strange times call for unconventional methods of “playing live”.

Despite the pandemic, what is it in the pipeline? Which is the thing that you are more looking forward? And, which are your next plans?

We’ve started writing a new album with our time off, and hopefully we’ll be able to get into the studio to start working on it this winter. Other than that, we’re working on a couple singles, and hopefully getting to Europe!

So, High Priestess NightHawk, we’re almost at the end. Please be free to say hi to your fans and listeners. Thank you so much for this interview.

Thank you for inviting me to answer these questions! Stay tuned, we have some fun things ahead.