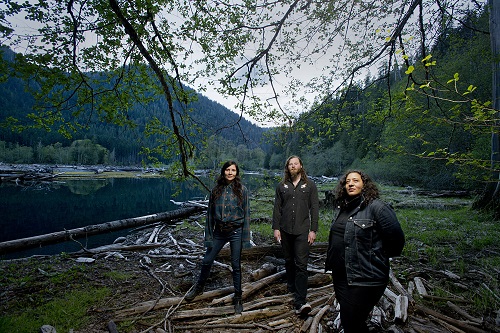 Despite their decennial career, Seattle-based sludge rockers Helms Alee has always navigated the safe waters of the underground musical panorama. The new acclaimed album “Noctiluca” , released by powerhouse label Sargent House on April, marks their sixth and after a successful tour with the drone doom superstars EARTH, singer/bassist Dana James took some time to reply to our questions. Learn more about it through this nice interview.

For the readers that still are not familiar with Helms Alee, would you like to tell us in detail, how the band got together?

Helms Alee got together in the autumn of 2006. Ben and I had been playing music together for a little while in a project called Young Astronaut. The drummer for that band went off to school and we were left drummerless. We started writing songs with a drum machine but it was far from satisfying. We knew we wanted to live drums but we wanted to find the right person. Ben and Hozoji were old friends from the intertwining music circles in Seattle and Tacoma and at some point, it came up in conversation that maybe she’d come to play drums with us. Luckily, she did it! The three of us immediately hit it off as solid friends and as like-minded musicians and now it’s been almost 14 years together! It’s still fun and still interesting.

Back in April, Helms Alee has released their fifth album “Noctiluca”. First of all, how would like to present us its general lyrical subjects?

The lyrics subjects are all over the place. We share duties when it comes to words and vocals and often, we even collaborate on words for the same song. Sometimes there’s a theme with the lyrics, but a lot of time it starts as just with words on paper that seem to come out of nowhere. For me, it’s only later down the road that I come to realize I may have been subconsciously writing about a particular thing or feeling. There is one song called “Word Problem” in which I wrote the lyrics specifically about being addicted to social media. Also, the words of the song “Lay Waste, Child” were written right around the time when Trump was elected so there is a kind of gasping for air sentiment of disbelief, anger, and disgust present for sure. Though, it’s pretty rare for me to write directly focused on a specific idea. Usually, the lyrics always start as audible ramblings that take shape over time and as nebulous feelings.

Secondly, why there was a long break between this latest full-length and “Sleepwalking Sailors”?

Well… there wasn’t it! We realized our record “Stillicide” in late 2016 on Sargent House Records. Typically, we publish records about every three years, which I think is a generally reasonable amount of time for writing, form, struggle with, refine and record the songs. It’s a timeframe that Helms Alee has unconsciously stuck to over our band-span.

On the last instance, which are the main differences both lyrically and musically that you can denote between “Sleepwalking Sailors” and “Noctiluca”?

I don’t see our music like that. I suppose that we’ve grown as both musicians and as humans living life, so some sensibilities change and shift. But we’ve always written our songs the same way which makes it difficult personally to tell you any strategic or obvious differences between any of our records. However, looking back on them all, I can regard the distinct moments that each record captures, but as for trying to discern what the differences are between records, I think I’ll leave that up to someone else to analyze.

I was curious to learn how was the experience with the producer/engineer Sam Bell?

Working with Sam Bell was great. It’s easily one of the most comfortable and fun and efficient records that we’ve done. He is very good at his craft and quickly moves and knows the sounds he wants. We love the fact that he was also very open to experimenting and getting weird. I am extremely happy with all the texture, sparkle and energy that we captured on this record thanks to his prowess. One of my favorite things about the record is that I feel it focuses more on the song as a whole and how it comes across rather than every single detailed intricacy of each instrument. It gave us room to make certain aspects pop out at certain times.

To promote “Noctiluca”, 3 singles were taken from it and namely are “Beat Up”, “Interachnid” and “Spider Jar”. What would you like to add about each song concerning their lyrics?

I would have to defer that question to Ben and Hozoji who wrote the lyrics to those. I would add that those two are both amazing wordsmiths and every time I read what they come up with, I’m blown away and deeply inspired.

Between May and June, you’ve toured along with the legendary drone/psychedelic soon duo Earth. How was this adventure with them?

A tour always feels like an adventure and this one was no exception. Earth was amazing every night. They have honed their craft to perfection and they do not waiver in their deliverance of the goods. It was an honor to tour with them.

Do you have a nice episode that you cherish the most?

In Austin, Texas, we played at the Barracuda outdoor stage. Right after we all loaded in our gear in the most humid and hot sticky air, a very quick and rowdy monsoon-like storm proceeded to unleash a torrential downpour. We frantically ran around trying to get our gear and merchandise undercover and then, we had to soundcheck in the downpour. Luckily, the stage was under solid cover, also the storm left as quick as it came and it was totally fine for the show. Of course, it was one of my favorite shows of the tour and on top of all, Earth was fantastic that night. There was something about the humbling power of Mother Nature that made me focus on the magic of the night and be thankful that we are fortunate enough to be creating and playing music like this.

I love “Noctiluca”‘s cover artwork. In some ways, I like its tidy cacophony of bright colors. First thing, who’s the author of the artwork and in essence, how it is gets connected with the overall musical and lyrical context?

The author is our drummer Hozoji Matheson-Margullis. It’s a photograph of sand under a microscope with polarized light. Hozoji occasionally writes her lyrics from the perspective of a tiny sea creature so it is in some way connected to that. She finds my riffs and Ben‘s simultaneously bright and colorful while they might be also dark and mysterious. For example, the photo could be a visual representation of how she feels their riffs. Mostly for her, it’s just a reminder of how beautiful the world is when you look at it from outside of the daily human perspective.

Before concluding our interview, which is the next band’s plans in terms of touring the US and Europe?

We are hopeful in making plans to tour Europe in the spring of 2020. I’m sure we will probably do some more US touring as well in 2020. As for the rest of 2019, in November we are teaming up with Cave-In in for a short and sweet west coast run. I’m excited and looking forward to all the adventures.