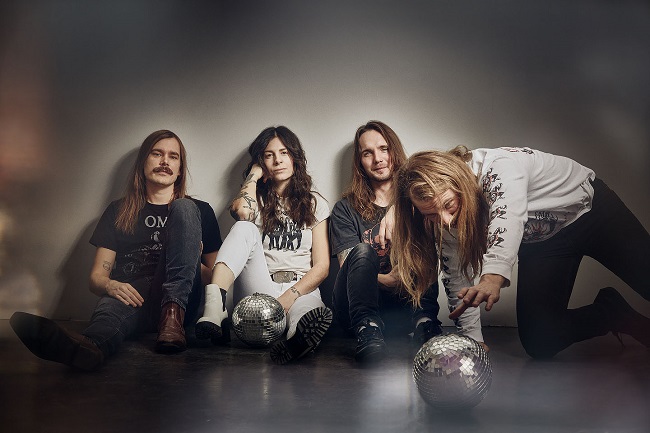 Due to the situation, perhaps it went overlooked but hopefully with this interview we will shed some light on this release and the shrewd lyrics mixed with pure ’70s adrenaline. Enjoy!

Hi Jennifer, welcome to Femme Metal Webzine. How are you? And, how are these strange days treating you?

Thank you so much. Finally, the good weather in Sweden is coming and the only thing you want to do is being and have activities outside.

For those who are not familiar with Hot Breath, would you mind introducing the band?

Sure. In the beginning, we have all started with other bands. For example, me and our drummer Jimmy used to play in Honeymoon Disease then our bass player Anton in a band called Hypnose. And lastly, our second guitarist Karl was playing in a band called Grand.

Indeed, when you play in a such small scene as the Swedish one, you begin to know everybody. However, after the split-up of Honeymoon Disease, me and Jimmy decided to get back in the games. So, we called Anton and Karl, and we set up a meeting. Indeed, that’s how our adventure began.

On April, Hot Breath’s debut album “Rubbery Lips” was released via The Sign Records. When did you start to collect the first ideas for this LP? And, how did it develop?

Actually, I don’t remember exactly when we have began to write it. But, for sure it was immediately after the release of the EP and indeed, ideas kept flowing. With this album, our intent was not sounding as a regular rock album instead we want something that can represent our musical influences which include also pop and soul.

In that way, “Rubbery Lips” is really an honest album because it represent who we are. Since the beginning of the production, we agree that every song written should be included in the album. For the sake of that, we have also recorded a cover of The Rolling Stones.

Between the self-titled EP, released back in 2019 and “Rubbery Lips” released now in 2021, there’s a couple of years in the middle. Why it is passed so much time? On top of that, which are the main differences that can you find between these two releases?

Indeed, there are quite some differences between our EP and “Rubbery Lips” because first of all, it features just 4 songs. Then, at the time we had just started to play together and in truth, our musical style was still evolving. In this case, the songs “Maniac” and “Still Not Dead” are an example of it.

But, with “Rubbery Lips”, we have explored a new world which includes a wide spectrum of different musical influences. Indeed, our single “Who’s the One” is one of the slower songs of our LP and it’s something that our audience didn’t expect for us. As a matter of fact, the best thing on “Rubbery Lips” is this musical variety.

Yeah, to be precise the title album is a direct citation from our song “Still Not Dead”. I find it interesting and it can mean everything. In “Still Not Dead” we express the will that as a human being you can have. Also, “Rubbery Lips” can be open to different interpretations. For example, it can be related to plastic surgery when they get filled with Botox.

Or simply, the most natural thing, the human death, which during its natural process of decomposition, the lips swollen up. The point is people start to ask you questions and you get stuck with it. Then, between us, we discussed that maybe “Rubbery Lips” was the right title album for Hot Breath. As you have seen, it can literally means anything and everything.

Out of “Rubbery Lips” 3 singles were released: “Healing”, “Who’s the One” and “What Are You Looking For? I’ve Already Found“. What insights can be share about it? And why did you opt to choose them as a single?

As I mentioned before, for us, it was really important to introduce to our listeners our different musical peculiarities. For example, “Healing” is a rock song with a catchy chorus while “Who’s the One” is much slower and more groovier with a melancholic feeling in it. Last but not least, then there’s “What Are You Looking For? I’ve Already Found” represents the punk-y side of Hot Breath. Indeed, our attempt was to capture the attention of the audience by proposing three different sides of us.

What concern the lyrics, in “Who’s the One” there’s a sentence that I’d like to quote: “Who’s the one to blame when the fire is gone”. It mostly about when you’ll leave someone in a relationship, in a friendship or someone that you are close to. In every situation, there’s always someone to blame. While “Bad Feeling” is about the party life but the day after [laughs]. The lyrics is based on a true story from one of our friends.

Indeed, he woke up without remembering anything than a bad feeling of anxiety which it followed up for the next few days. Instead, for our last single “What Are You Looking For? I’ve Already Found” I’ve imagined a boy or girlfriend stuck in their past relationship. They both don’t understand why everything is changed. They are both feeling bad for this and they want to talk about it.

Considering the whole ongoing situation, which are the next band’s plans? What are you looking for the most?

Of course, more than ever, we want to tour and play life. However, if we are realistic, I’m not so sure that it will happen this year. In the meantime, we’ll keep on composing new material for our new album or some new singles. Whatever it’ll happen, we feel so motivated.

So, Jennifer, this was my last question. I hope you’ve enjoyed our chat. Please be free to conclude our interview as you like. This is your space now.

First of all, thank you for reading this interview about Hot Breath. Hopefully, we’ll see each other soon. Take care and stay safe.