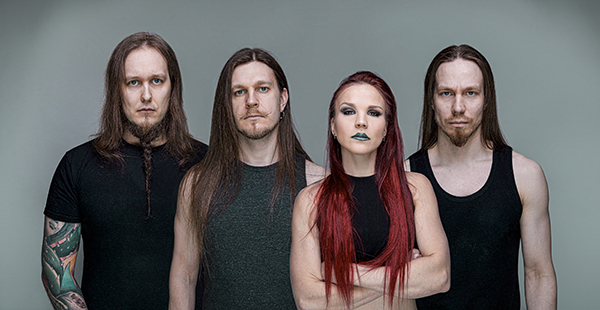 Finnish progressive aggressive metal quartet Humavoid is ready to conquer the world with their second album “Lidless” that was released by Noble Demon Records on August 21st. The Finns have been working hard in the past years and now they are stronger than ever. We had the opportunity to interview with the singer Suvimarja and the guitarist Niko to get to know better Humavoid world.

Hey guys welcome to Femme Metal Webzine! How today is treating you?

Thank you, we are doing great.

For who still yet not familiar with Humavoid, would you mind briefly introduce the band and give some biographical hints?

Suvimarja: Sure! We are Humavoid and we play progressive-aggressive metal. The band was founded around 2014, I’m the keyboardist and main singer, and here with me is Niko guitarist and also singer, then we have Heikki the drummer and Mikki the bassist.

Niko: After a few self-release albums, now we are excited to the release of our new full-length via Noble Demon Records.

Your second full-length “Lidless” was released on August 21st via Noble Demon Records, what can you share about its genesis and lyrics?

Niko: When we started making the album, we knew our sound would be heavier because during the live shows it always felt more fun to play the heaviest part.

After the vocal arrangements were complete, we realized there was more growling and screaming and less clean vocals, and at the end the album is more heavier than what we thought, it sound like us today more than before.

Suvimarja: The lyrics are about how you can be the master of your life, make your life to be as you want because everything is up on you.

Niko: You can sat on and complain or you can do something to change. Of course, they are not so directly implied and they are used as metaphors or maybe as weird stories too.

There is a special guest in your album, the well-known jazz pianist and composer Iiro Rantala, how did this collaboration happen?

Niko: When we were making one of the songs, actually the first we completed for the album, I thought a jazz piano solo would work, bringing it to another level.

Suvimarja can do it, but since Iiro Rantala is one of her influences, and he is known for being openminded, we decided to contact him, and his response was positive.

I was wondering about the cover album, I find it very interesting and representative of your music, who is the artist behind it?

Suvimarja: The involved artist is called Juhani Perälä and we found him through Instagram. Luckily, he doesn’t live far away and we easily made contact for our collaboration.

We had a vision of what we would it to look like, including the colors and all. In the end, I think it represent our music because even if it’s heavy, it’s not sad music.

Niko: There is a specific reason of why his location matter: we wanted it to be a real painting and it turned out to be on a full canvas. The major issue with what were dealing was: it has to be a metal cover, but how we can reflect our music in the best way possible? I think Juhani perfectly succeeded in it because he created exactly what we were hoping for.

Suvimarja: He told us that he was listening to the album all over again while painting.

Niko: I guess it was an intensive session, because after one week he was almost done.

Suvimarja: Yeah, he was very excited about our music, so when we went to collect the painting, we stayed more than an hour talking about music and art.

Niko: We like to talk with like-minded artists and surely, this connection happened with Juhani as well as Iiro.

I like really much the videos, would you mind to tell something about their making-off?

Suvimarja: We self-produced our videos, my task is mostly related to editing and producing our videos. In truth, we have a small team composed by friends and my brother. So, my friend has directed our first video “Lidless” while the second one, “Aluminum Rain” was directed and filmed by me, Niko and my brother. Additionally, he helped us out the official band pictures.

Niko: We could also hire someone else but we want to have a certain kind of visual direction because most of the times, we don’t know what we are artistically headed to. At the moment, we are just aware that it’s the best solution for us.

Also, we are kind of afraid to trust completely someone else for the simple reason that if it doesn’t come up the way we wanted, we might end up disappointed. Of course, it’s fun to produce everything ourselves but it requires a lot of work.

Suvimarja: For example, the golden masks, tubes and the background from “Lidless” video were painted by me and Niko and just the background, it’s one day of work. Even if it is a lot of work, we love to do it. Instead, concerning our video “Aluminium Rain”, the masks that you can see, they were created by Maria Loikala which she also got the same idea as we.

Niko: Probably, the only downside of the entire process is that when you self-produce everything, there are a lot of trials and errors. For instance, we shot our material and solely, four days later, we showed it. We act like a filter in order to carefully decide what to show to the audience.

Suvimarja: Yeah, we want always to be in control.

Since we have any certainty as in regards to the future happenings due to the current COVID-19 pandemic, but are you planning any tour or live shows?

Niko: Now it seems that a lot of the famous artists have kind to fight for their place, especially with the venues. For sure, most of the gigs will be played next year. Maybe starting from the spring, however it might happen that some gigs could be played this fall. In all this, the positive thing is that when we are well rested, we can play like crazy.

Suvimarja: We want to play again, it seems like forever!

If you would have the chance, where would you like to tour?

Surimarja: We would like to your outside of Finland because we have not played anywhere else yet, so every place would do, but Europe first.

Niko: Germany, Spain, France, Italy but of course we are happy to go everywhere there is chance to play.

As a band, what are your main music influences?

Suvimarja: This is something that people ask a lot. We all like Meshuggah and I’m sure, you can hear it in our music. However, it’s hard for me to say which are my main influences because there isn’t just one band or artist that I like. In fact, when I compose music I get inspired by my previous musical experience as a theatre pianist. Since I have an academic background in classical music, modern composers such as Schönberg and Mussorgski are to be considered my main influences during my composing process, but also I like Stravinsky, Brahms, Vitz, Chopin and Liszt.

Niko: We all have a lot of different influences, but personally I love the early Metallica, Megadeth, Sepultura and that stuff, but then at some point there was just Meshuggah. Growing up I did not listen anything else than death metal such as Cannibal Corpse, Morbid Angel and stuff like that. Later, I started to enjoy Dillinger Escape Plan and Ion Dissonance.

We can say that throughout my life I had several musical phases: then it followed my appreciation for classical music, jazz-fusion and flamenco. I like the rhythmic of flamenco, because it is not obvious and neither easy to replicate which makes its harmonic language is quite fascinating. I like it because also in our music I don’t want the harmonies to be super obvious, there are different moods that just happy or sad, we want to be able to express all those other feelings.

Well, guys, sadly our interview is almost over, thank you for your time! Would you like to say something to our readers?

Niko: Stay safe, come to the shows when it’ll be possible. Keep your eyes and ears open, be open to new kind of influences

Suvimarja: Listen to our new album!