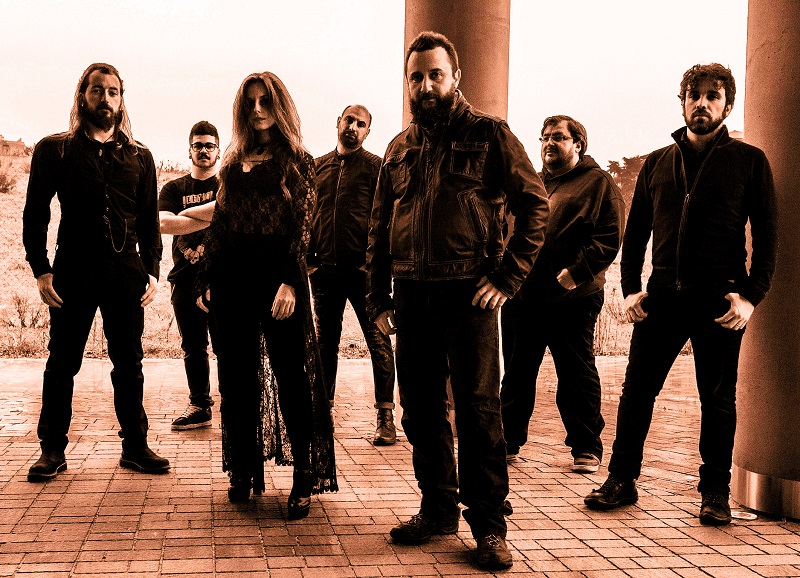 In this chat we’ll discover more about the band’s latest release “Krononota” released by Italian label My Kingdom Music. The fifth full-length of the Italian avantgarde metallers In Tormentata Quiete represents the final chapter of a concept began back in 2001 with the debut demo “I tre attimi del silenzio” . Let’s learn more in this interview. Enjoy!

Hi Samantha, welcome to Femme Metal Webzine. How are you and how is life treating you in these precarious days?

Hi Miriam and Femme Metal Webzine readers. I am trying to be very active from an artistic point of view. Actually, this is a way to use the time I have, now that it is not possible to live a “normal” life as before. I am sure that everything we’re experiencing now has come to teach us something.

On February 19th, iIn Tormentata Quiete’s fifth album, “Krononota” , was released via My Kingdom. What would you like to share about its general production? When did you start to collect the first ideas for it?

We started to work on “Krononota” more or less 4 years ago. I was travelling back from a studying and working experience in Scotland where I’ve spent one great year travelling and learning a lot of new exciting things at uni.

After that experience, I remember it was a particular period of my life, when my energy was converging towards the right direction. At the time, I had just joined the group and everything started instinctively. I think that we all felt in our natural environment. Actually, we were rehearsing without a specific purpose, when the first piece began to take shape. This song was the 6th of our CD, “Odor Mediterraneo”.

Back in December, the promo video of the lead-in single “Color Daunia” was released. Why did the band opt for this song and would you like to disclose more details about it?

“Color Daunia” is the most “pop” song of “Krononota”. Despite that, we felt that it was the right choice for us. We didn’t plan a promotion strategy and we didn’t know what to expect from our more “traditional” metal fans. However, as our oldest fans know, we never and we won’t compromise our sound just for music promotion. We were just happy about the result of that song, that to be honest, it was a real surprise for all of us.

I know that the upcoming album represents the final part of a concept album you’ve developed through 5 releases whose inception is marked by 2001’s demo “I tre attimi del silenzio”. In short, would you mind recalling our readers its main lyrical theme and its evolution?

The answer to this question could take about 3 days of non-stop writing… ahah! So, I’ll be very brief. The main focus of the story is a common man. In this case, we are not talking about a specific man, but men or women in general. Life, in all its shades, is reproduced through the words written by Antonio Ricco. We can say that without his words, “In Tormentata Quiete” wouldn’t be the same. So, without Antonio Ricco’s poetry our music wouldn’t exist. It wouldn’t be possible to be us without his writing ideas.

Each song on “Krononota” features a memory interpreted by the main character. Which function do these poetical memories play?

You must imagine a man, sitting on a chair in front of the fireplace, writing his lifelong memories. He’s struggling to remember everything he has experienced in his life, just like a journey report, trying to be very objective. It is a way to record your life on paper.

Is there a specific purpose to write a diary of your life? Maybe not to forget, perhaps to live some specific moments again in your mind, or maybe simply to draw your own conclusions of your life achievements, or perhaps just to have the impression that we can go back for a while.

Actually, “Krononota” compreses of two sections. Indeed, the first one is represented by the self-titled song and “Urlo del tempo” while the rest of the album serves as the second one. Why and which differences do they entail?

As just mentioned above, the first one is the rational part of the album, where the main character just records the most important memories of his life. The second one, which is represented by the songs, is the emotional part. Here, subjectivity and emotions take the main role, and we can enter the inner reality of a man, where the course of time distorts everything.

The press release quotes that in “Krononota” there are elements of “Italian traditional folk tastes, the folk-progressive Rock, the avant-garde Metal of SOLEFALD sounds, the great DEVIL DOLL or the atmospheric and cinematic aura of ULVER”. To some extent, how much challenging is finding the right balance between these diverse musical peculiarities?

To be honest, we never try to “find” the right balance between kinds of musical features or influences. We never sit down and talk about what we should do with our music. We all come from different musical backgrounds, and I think this is the key. As a result, we all grew up with a broad appreciation of music including jazz, popular music, rock, metal, and classical music.

What does the future hold for In Tormentata Quiete?

That’s a good question. At the moment, the future is not clear. In other words, we don’t want to think of it as something, but just as something to embrace, whatever happens.

So, Samantha, we’re almost at the end and with this, please be free to say hi to your fans and your readers. Thank you so much for this interview.

Thank you, Miriam, for your challenging questions, thank you all Femme Metal Webzine readers. We would be very happy to have your feedback about “Krononota”. Feel free to share your opinion with us.