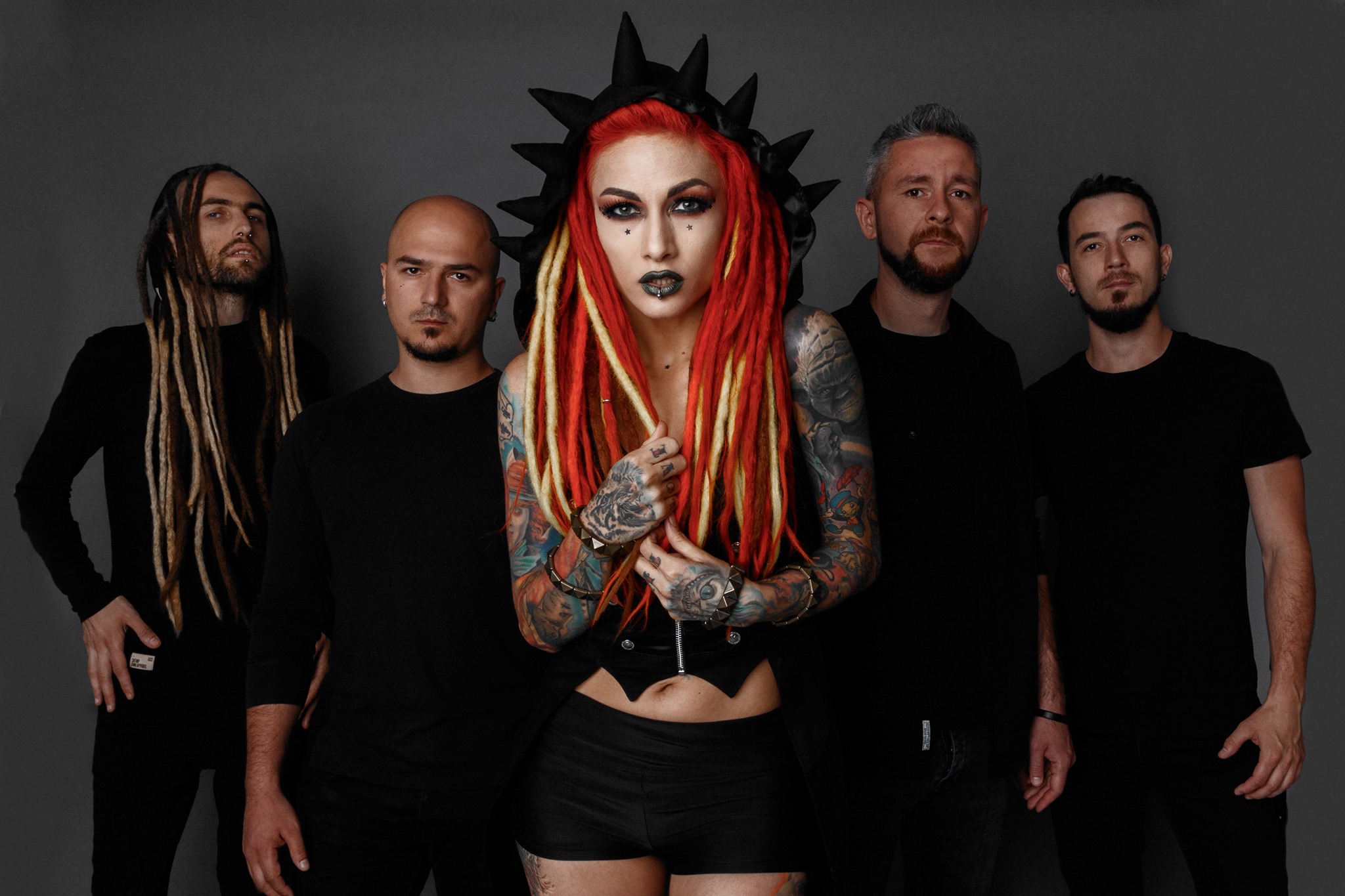 Few are the women in metal who show off an awesome vocal talent, an amazing stage presence and, of course, a great sensibility and sense of responsability. Elena Cataraga, aka Lena Scissorhands, is indeed one of these rocking girls. Fabolous vocalist of Moldavian band Infected Rain, this alternative model and make up artist is now back on the road with her guys in order to bring on stage the latest album by the band, “Endorphin”, released on October 18th via Napalm Records. On the occasion of one of the Italian dates the band played, we had the chance to meet this incredible artist and we talked about this latest album (the first one released by the Austrian label), the current situation that the Earth is dealing with and more. Have a full in-depth interview with us!

It’s a great pleasure hosting this chat with you today! How are you doing?

This is the second time you’re playing here in Bologna, if I’m not mistaken, so how was your day actually, since, you know, there’s a lot of traffic, a lot of bad weather?

Well, as you perfectly know you’re currently on tour with Eluveitie and Lacuna Coil, so I would love to ask you: how’s the tour going so far?

Lena: Very good, we’re having fun, you know, full shows, I love it! I love it so far!

Well, I had the pleasure of seeing you on stage in here two days ago, so I’m looking forward to see you again live on stage!

Let’s begin with the very first question: as you know, ‘Endorphin’ has been released over a month ago, more or less, so this is the first album you’ve released with Napalm Records. I would like to ask you, first of all, about the feedbacks you’ve got both from the press and the fans, if the record was well welcomed, so to say, and how did you feel like working with such a great label as Napalm Records is?

Lena: Oh, I will tell you the feedback was amazing and still is, like we’re getting messages every day… people love it, the press love it a lot, we love so far working with Napalm, it feels like finally there’s extra people to bring us to a different level, so we love it. We love it a lot!

I’ve read over the Internet that a lot of people claimed that this is the best record of the year or it is amongst the best records so far, so I guess it’s a great satisfaction for you, since it’s your baby, in a way!

‘Endorphin’ is such a strong title, of course the meaning itself is as well. Is there a specific or a peculiar meaning to you or the guys?

Lena: Oh, this album is like a saviour, I’ve been going through a very difficult year, a very, very difficult year emotionally and physically, so ‘Endorphin’ is like fresh air. It gives us hope, it gives us positivity and it is what makes us go on, for sure! And we find it in music, so…

Also the album cover is very strong in a way, because we have these two hands holding a heart, a very strong organ, as you know! I would like to ask you about the meaning, because as you perfectly know we also see the heart in ‘The Earth Mantra’ video, so is it basically connected to the video itself?

Concerning “The Earth Mantra”, since I’ve mentioned, the song has a really strong video, with a strong meaning as you know: I’ve been basically caught up, surprised, when I’ve listened to the song and I’ve read the lyric. You say “We are parasites”, referring to the human beings, I guess…

I know that you’re maybe aware of the recent events, like the burning forest in Amazzonia…

In your opinion, why or better, what shall we do in order to help the Earth basically, since a lot of human beings are showing off their cruelty? For example, I wouldn’t do such a thing, if I think of the burning forest in Amazzonia, the burning trees… well, it’s a strong image to see also on the newspaper. So why is the human being so cruel?

Lena: I don’t know why, I just know that human being is a very greedy creature, it’s very greedy, a very proud creature and people want to live a very rich life and in order to do that, they consume too much… so getting back to the first part of your question, I think the first step would be to consume less, the second step would be recycle and the third step would be using less plastic. You know, obviously, it would be great if people can stop killing animals and not eating so much meat, but honestly I know it’s a big, big step, so if people could just consume less and, you know, be better with their garbage, that would be so great! So great!

What do you think of the current situation of the Earth?

Lena: It’s very, very bad and I know lately that a lot of people are trying to be better, they’re trying to promote a better lifestyle. Famous people also, you know, but it is still not enough, unfortunately. It’s gonna take decades to change the human race. Animals are dying because of the plastic in the oceans, we are dying because toxins are in the air, in the fruit, in the vegetables, in the food we eat! The toxins from the plastic and the garbage, we’re getting ill or we’ll die by our own hands.

Going back over it, we talked about “The Earth Mantra”, but also ‘Black Gold’ ha salso a very strong meaning as well: for example, in the first video we see you ripping off your heart and you kinda die with the earth, while in this new video we see you vomiting gold, as you perfectly state in the lyrics! What’s your own vision, since people tend to judge and they want you to be that way, or to look that way? They need perfection, in some way… so what’s your own opinion about it and why shall we care about people’s judgement, since we shouldn’t?

How should we react to this kind of judgement or bias?

Lena: We should just stop to care about it. Trust me, I get a lot of comments from people saying: “You’re too skinny”, “You’re too this”, “You’re too that”, “Too many tattoes”, “Too much of this”, “Too much of that”. I never reply, not even once and I don’t even delete them. I like other people see, let them see! You know? I just like to be myself, I’m already very strict to myself, I’m punishing myself for many, many things in my own mind and I get my own side effects… but we don’t have to listen to strangers online, media… even in schools or home sometimes, how to say? The rules are too strict, shouldn’t be! Shouldn’t be!

Talking about Infected Rain, as you perfectly know more than me, you’ve managed yourselves for more than 10 years now, you did basically everything by your own?

You booked your own shows, you cared about your own band, being the manager yourself and so on… What has been the biggest obstacle you had to face during these years and the biggest satisfaction, instead?

Lena: Well, I think the obstacles were promoters and booking agencies that didn’t want to work with us, because we were independent. They thought that we are a very difficult band and that’s the reason why we are independent, but the only reason why were indipendent is mainly because we come from such a poor country with no possibilities at all, right? The biggest satisfaction is when you go on tour by yourself and you headline and you see soldout shows, no? That’s awesome!

Okay, this is my final question: if you were to give ad advice or a piece of advice to a very young band who would love to enter this kinda area of interest, the music business, what kind of suggestion would you give, given your experience, of course?

Lena: Well, I would say: stay true to your beliefs, stay true to yourself and make sure your music comes from the heart! Make sure, because there are so many talented bands out there and this is not a competion! You don’t have to be better than somebody, you just have to be yourself. That’s it!

Okay, thanks for giving us this spot! As the tradition wants, I call the interviewee to share the final words with us, so I call you to speak!

Lena: Yes, I would say to all the fans and to all the people that are listening to our music: please, come to our shows, we do such a big way to come to your country, to your cities. Come and support because we need you! Don’t sit home!